"Black-eyed susan" is a common name for a few different flowers which look very similar, but actually belong to several different species of the Rudbeckia genus. Not every Rudbeckia is a black-eyed susan. This article focuses on the species that are called black- or brown-eyed susans: R. fulgida, R. hirta, and R. triloba, and also covers the similar-looking sweet coneflower, R. subtomentosa.

Although these species look similar and have similar habitat preferences, there are significant differences in their growth habit and ideal growing conditions. By knowing these distinctions, you will be able to better utilize these plants in your garden, as well as identifying them in the wild, which can be useful if you want to grow a particular species from seed.

All of these plants are native to Eastern North America, and R. hirta has a wide native range, across most of the continental U.S. and into Canada. Wherever you are, I recommend only planting locally native plants, so as to maximize your positive impact on the environment. Check that you are in the range of these species before planting them in your garden.

Use these maps to check whether you are within the range of each species. Click the maps and you can zoom in to view county-level data where available.

This species has the smallest flowers. It usually grows as a biennial. It prefers moister conditions than the other two species.

Rudbeckia triloba is the most distinct of th species described here.  It is easily identified when in bloom, as it has much smaller flowerheads, with fewer and shorter rays, but its foliage is also distinct.  As the scientific name "triloba" suggests, R. triloba often has leaves with three lobes. This feature is sufficient to identify a plant as belonging to this species and not the other two black-eyed susan species described here, but many leaves on R. triloba plants have no lobes, and some plants have no leaves with lobes.

When blooming, the growth habit of R. triloba is more tall and upright, and sometimes gets slightly bushy.  This species is more likely to push up through other vegetation.

R. triloba is easy to grow in gardens, although it can sometimes look a bit raggedy.  It is one of the better Rudbeckia species in terms of supporting insect biodiversity.

This is the most sun-loving of the black-eyed Susan species; it is shorter-lived, and best suited to exposed locations and disturbed ground.

Rudbeckia hirta has a very similar-looking flower to R. fulgida, but is easily distinguished by its foliage, which is densely hairy, and often lighter green in color than the other two species.

Of the species treated here, R. hirta is the most sun-loving species.  It prefers full sun, and average moisture conditions, although it can grow in dry habitats, including open rocky areas, dry prairies, and openings in upland forests. It also occurs in disturbed habitats including along roadsides and railways, eroded slopes, and waste ground.

R. hirta is easy to grow with sufficient light, but tends to be short lived.  Under the right conditions it will reseed itself, but it will not persist in the environment if it has too much shading or competition from other plants.  It is the best choice of species for exposed locations, such as the small strip of land in the island of a parking lot, pictured below.

Want to learn more about the importance of gardening with native plants? I recommend this book!

The most common garden flower, this species is slightly more shade tolerant, and also the most persistent in the garden, spreading aggressively by runners.

Rudbeckia fulgida is slightly less common in nature, but more widely planted in gardens.  It is easily distinguished from R. triloba (which has much smaller flowers), but the flowers often look similar to R. hirta. The leaves, however, are much less hairy than R. hirta; they usually feel coarse or rough to the touch. They also have a distinctive shape, and are often darker green in color.

Compared to R. hirta, R. fulgida is more shade-tolerant, and prefers moister conditions and soil slightly richer in organic material.  It also tends to be longer-lived than R. hirta, and it reproduces vegetatively (spreading by rhizomes) as well as by seed.  In nature, it is more likely to be found in high-quality, less disturbed habitats, but it is so widely planted in gardens, and often escapes from cultivation, so if you find it growing wild near human habitations, it is probably an escape from a garden rather than a truly wild population.

A robust and aggressive plant, R. fulgida can hold its own against other plants in a garden setting.  It often is the plant crowding out the other more delicate plants in a garden. The plant is structurally tough, and it can tolerate being periodically stepped on better than some flowers, although it cannot handle regular foot traffic. It tends to be slightly longer-lived than R. hirta, and more persistent, in part because of spreading by runners.

What about cultivars or named varieties?

I recommend avoiding cultivars, and buying or growing and planting straight species plants, grown from seed from local populations.

Many cultivars of Rudbeckia species exist, particularly of R. fulgida, but also to an extent of R. hirta.  These cultivars often have different flower shapes and sizes (a few different colors), and to some degree, different growth habits from the pure species.  However, because all of these species are relatively short-lived and reproduce by seed (this effect is more pronounced in R. hirta), these cultivars often revert back to a natural state over time.

I recommend against planting cultivars for several reasons.  Cultivars lack genetic diversity, with each plant of the named cultivar being genetically identical or nearly-identical. They also do not necessarily reflect the local gene pool (and thus local adaptations) of local native populations of their species.  Cultivars often have been selected for insect resistance, which means that they will not support the ecosystem as much.  Wild populations of Rudbeckia often support aphids, beetles, and caterpillars, which in turn provide food to larger predators like spiders, praying mantises, and birds.  In my own observations, I have noticed that cultivars consistently support fewer insects.

The best practice, both for protecting wild populations of plants, and for choosing plants that will grow vigorously in your garden, is to plant "straight species" plants in your yard, that is, plants where each individual is genetically distinct, grown from seed from local populations.  These plants will not only establish a population in your garden with more genetic diversity, but they will be more adapted for the local conditions in your garden.

The Sweet Coneflower, Rudbeckia submentosa, is not officially named "Black-eyed susan" but it is in the same genus, and the flower looks nearly identical to other plants bearing this name.

This species has more of a midwestern distribution, mostly found in southern Wisconsin through Illinois, Missouri, and Arkansas, with a few scattered populations in other states.

This plant is a perennial and is quite tall, growing 3 to 6 feet.  It is easy to grow but topples over easily, especially if grown in moist, nutrient-rich conditions.  Although it grows in a wide variety of habitats, including disturbed ones, it is more likely to be found in more intact natural areas.

Read about other types of flowers

I found the last part on cultivars fascinating. I have to admit that I have never given it a second thought.

I've definitely seen R. fulgida growing farther northeast from its range...I think the map means that it's not documented as surviving in the wild in that state (although it has been in Canada--hence the blue on the map, which means introduced and established in the wild). R. fulgida is widely sold in nurseries (sometimes R. hirta too, and less commonly R. triloba) so you can find all three of these in gardens outside their range.

I'm pretty sure the Rudbeckia fulgida is the type growing in my yard in New Hampshire, even though the map doesn't show NH as a location. It spreads and comes back each year.

I remember seeing these growing wild. I believe we used to call them railroad daisies because the flower, although not white, resembles a daisy.

Thanks for the information on which Black-Eyed Susan species will grow in partial sun, moderate to dry soil, which species is invasive, and which are not. 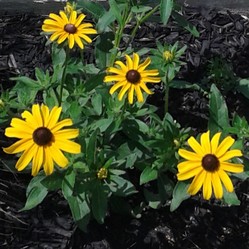 Bringing Nature Home: How You Can Sustain Wildlife with Native...
68%  7   6 cazort
Perennials 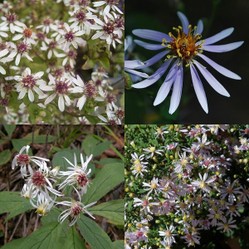 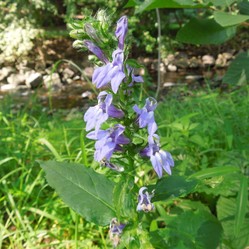 Lobelias of Eastern North America, including Cardinal Flower, Great Blue Lobelia, the annual Indian Tobacco, and many others.
Loading ...
Error!