Maya’s Children: The Story of La Llorona adds a 500+-year-old legend to the storehouse of children’s literature in English and Spanish through the substantial storytelling capabilities of Rudolfo Alfonso Anaya (born October 30, 1937), as:
• anthologist, editor, essayist, folklorist, historian, mythologist, novelist, playwright, poet, storyteller in the Old Southwest’s Land of Enchantment;
• counselor in the United States of America’s forty-seventh state; and
• emeritus literature professor at the University of New Mexico.

It can be considered an old tale whose role-modeling cautions against children behaving badly and parents suffering nightmarish losses.

An updated version gives the Crying Woman different means, motives, and opportunities, with:

Maya has to be hidden in the jungle because Señor Tiempo (Father Time) begrudges her having a never-ending life and receiving love from gods, nature, and people. As a young beauty, she is so lonely that Wise Owl shares how to grow babies in a pot. Five clay-potted babies soon jostle one another on flat surfaces throughout Maya’s remote abode. But Time keeps current of Maya’s whereabouts and the potted progenies’ existences.

Aztec calendar stone known as Stone of the Five Suns or Eras: basaltic carving, which includes sun and time symbols, was buried during Spanish Conquest of Mexico, ca. 1520, in Zócalo, main Aztec ceremonial center in Tenochtitlan:

rediscovery of stone on December 17, 1790, during repairs to Metropolitan Cathedral of the Assumption: consecrated in 1656, construction was ordered by Hernán Cortés after tearing down of nearby Aztec Templo Mayor (Main Temple).

Maya's children do not get back home, ever!

Time never lets go of plans to turn Maya’s endless joy into limitless woe. He makes use of stormy weather to deceive Maya into destroying all five pots in whose fertile soils a mystery man’s seeds grow babies. Maya needs to find her children to ease her culpable, manipulable naiveté. She therefore opts to concentrate audible sobs and visible searches to jungle-like settings of:

So Maya’s Children: The Story of La Llorona provides kindergarteners to fourth-graders aged 5 to 9+ years with culturally enriching, educationally entertaining, geo-historically enthralling journeys into Mexican and New Mexican popular culture, thanks to:

In ancient Mexico, the beautiful and magical grandchildren of the Sun God are endangered by the threat of Señor Tiempo who, jealous of their immortality, plots to destroy them.

Pyramid of the Sun: stairway to the top ~ Sun was important power and symbol in ancient Mexico

Zia Sun Symbol on Flag of New Mexico: Aztecs were not alone among indigenous American peoples in belief in Sun as sacred symbol; New Mexico's indigenous Zia tribe esteemed their own Sun Symbol.

Historic View of Tenochtitlan, Ancient Capital of the Aztec Empire, and the Valley of Mexico ~ Giclée print ~ available via AllPosters

CruiseReady, Thank you for liking this review! Rudolfo Anaya has a talent for lifting readers up -- as in his beautiful story "Bless Me, Ultima" -- even when he touches upon what is disappointing or sad in life. The book is told so beautifully and offers such cultural and historical insights that it is worth the read and re-read...as I do with this book and with the author's other children's books. Spanish-speaking parents use the story of the crying woman -- not of scary monsters like in horror films (which I tend to avoid) -- to encourage their children to be home before dark and to be careful of strange behaviors and people outside their known circle of family, friends, and peers.

What a beautifully illustrated article! After reading it, I find myself thinking I would like to read this children's book myself, even though it sounds as if it has some pretty sad elements.

Mira, New Mexico lives up to its nickname as The Land of Enchantment. Me, too, I also love the Zia Sun Symbol on New Mexico's beautiful state flag.
I appreciate the compliment on the illustrations in my articles. Images entertainingly convey information and effectively reinforce education.
I especially value your compliment on this article because Rudolfo Anaya is a living treasure.

I love that sun symbol on the flag. You always illustrate your articles so nicely. Thank you for sharing all this with us. The story is also interesting. 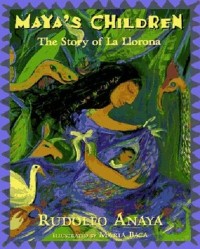 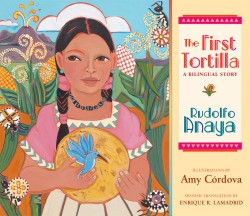 Tortillas are one of Latin America’s beloved foods. Their creation belongs among Latin America’s endearing legends. The tale’s update enchants all readers of “The First Tortilla.”
44%  0   6 DerdriuMarriner
Drama