Book Review: Quest for the Tree Kangaroo by Sy Montgomery and Nic Bishop

Quest for the Tree Kangaroo: An Expedition to the Cloud Forest of New Guinea appears as a 2006-released title in the Scientists in the Field series.

It begins with an expedition to the cloud forests 10,000 feet (3,048 meters) above sea level at a three-day hike from Yawan village on Papua New Guinea’s Huon Peninsula.

The name Wasaunon designates the camp where scientists operate from:

A few degrees south of the Equator, the forest explodes with:

Expeditionists hope that immediate take-aways will be understanding the button-eyed, golden-furred, pink-nosed, round-faced, thick-tailed, upright-eared marsupial whose hind legs uniquely move independently of each other. The long-term concern is sustainability of the 100,000+-acre (40,468.56+-hectare) Tree Kangaroo Conservation Program.

Scientists judge as the greatest challenges to Matschie’s tree kangaroo:

So Quest for the Tree Kangaroo keeps cultural enrichment, educational entertainment-seeking readers -- fifth-graders and ten-year-olds upwards -- on the edge of their seats with an expedition to the cloud forest of New Guinea, with:

Elliot, Daniel Giraud. 1873. A Monograph of the Paradiseidae or Birds of Paradise. London: D.G. Elliot.

The Quest for the Tree Kangaroo: An Expedition to the Cloud Forest of New Guinea by Sy Montgomery with photos by Nic Bishop ~ available via Amazon

It looks like a bear, climbs trees as easily as a monkey, and has a belly pocket like a kangaroo, but what’s a kangaroo doing up a tree? The amazing Matschie’s tree kangaroo lives in ancient trees of Papua New Guinea’s cloud forest.

Silvery green beautifies the foliage of ornamentals and trees. It may be mesm... 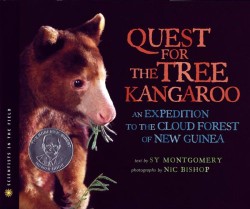 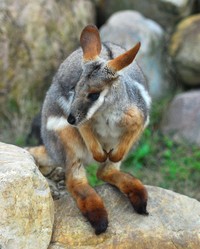 Ring-Tailed Rock Wallaby (Petrogale xanthopus) of Australian Lands "Down Under" 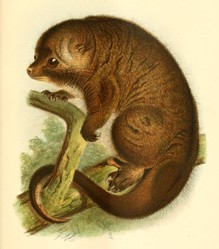 Silvery green beautifies the foliage of ornamentals and trees. It may be mesmerizing in amphibians, birds, fish, and insects. It will be unexpected in D’Albertis' ringtail possum.
Loading ...
Error!