Scaredy Squirrel clusters activities around his own doorstep:

The 2008-released picture book predictably begins with:
• front flap with nutshell plot summary, plot complication, and three content questions, and with reader suitability advisory (excluding pirates in this case);
• prefatory pages with pre-storytime behavior modification (sunscreen no. 65 in this instance); and
• rear flap with biographical extract sharing pertinent experiences (avoiding encounters with such collective noun-described challenges as flocks of disgruntled pigeons, mobs of famished hammerhead sharks, herds of last-bell holiday shoppers) and fears (jellyfish) and with a self-portrait at work amid wall art.

It considers what Scaredy Squirrel does when everybody else heeds billboard advertising and spends vacations at the beach.

Collective nouns describe the standard term by which objects and organisms are grouped and measured together. Scaredy excels at lists of such collective nouns which identify his aversion to beaches as:

He in fact finds it possible to build his own pleasant, private, safe beach outside his oak tree (Quercus spp) with:

Scaredy Squirrel encounters some of what he expects

A red-headed woodpecker's "Tock! Tock! Tock!" gets Scaredy thinking about a germ-free, shiny-sided, unoccupied seashell's clear, comforting, real-time ocean sounds. He has everything ready for his Operation Seashell Mission:

But the beach is not deserted between 11:40 a.m. and 11.49 p.m. Scaredy jumps out of the box cautioning a live animal with nut allergy-provoking traces to play dead for two hours but neglects to release the S.O.S. message-stuffed bottle.

Scaredy Squirrel finds something fun wherever he goes

Building sand castles, floating in shallow water, sunbathing, and taking pictures keep Scaredy busy, happy, and on schedule. Abilities to face facts and modify behaviors lead Scaredy to copy friendly beach-goers by adding 25 garden gnomes to his private beach. But he must return his perfect but occupied seashell.

Scaredy Squirrel at the Beach by Mélanie Watt ~ available at Amazon

We know by now that Scaredy Squirrel only feels safe when he's at home in his nut tree. So even though the sun is shining and it's time for a vacation, Scaredy does not want to go to the beach.

New World flying squirrels include coastal locations, such as Cape Cod in Massachusetts, among their habitats.

Scaredy Squirrel is a New World flying squirrel, of which only two species exist ~ 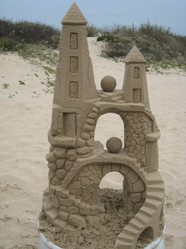 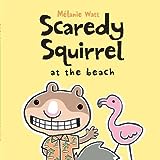 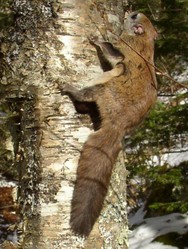 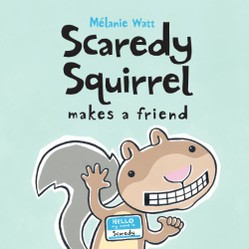