Book Review The Boy Who Conquered Everest: Jordan Romero and the First Family to Summit Chomolungma

Sir Edmund Hillary and Tenzing Norgay hold titles as first known summiters of Mount Everest. Jordan Romero is the youngest. He tells his story in “The Boy Who Conquered Everest.”

Geologists acknowledge greater affinities of the mountains of Nepal and Tibet with those of New Zealand than with those of anywhere else. Mountaineers attribute Sir Edmund Hillary’s and Tenzing Norgay’s record-breaking achievements to:
• The former’s extensive rock-climbing in the lands to the south of Down Under;
• The latter’s impressive slope-scaling throughout the adopted homelands of the Tibetan Sherpas.

Jordan Romero’s preparation contrastingly boasts:
• practice sessions in his native California;
• successive summits of six of the world’s eight highest peaks.
It therefore does not include dry runs in New Zealand.

It does involve Oceania’s craggy rooftop views on:
• Continental Australia;
• Indonesia’s share of the island of New Guinea.
Everything gets detailed in “The Boy Who Conquered Everest.”

Selected in accordance with schedules and sponsorships, Mount Kilimanjaro was first on Jordan's list:

The sequence of Jordan’s summitings does not adhere to progressions from:

It instead follows opportunities congruent with:

For example, Mount Kilimanjaro garners the title of first climb from Africa’s being the 2006 vacation destination pre-selected by:

Jordan Romero, 13 years old, at the summit of the Carstensz Pyramid in Indonesia, on September 2, 2009.

Eleven-year-old Jordan’s record-breaking summiting on December 30, 2007 gets inputs from:

Highest mountain peak in North America at elevation of 20,237 feet (6,168 meters), Denali (Mount McKinley) is vast enough to generate its own localized weather.

Ascending and descending gets completed by 58% of all climbers. The title of second-youngest summiter -- by four months -- goes to eleven-year-old Jordan on June 21, 2008, for:

In summer 2009, Jordan's father Paul and stepmother Karen, while scaling Nuptse, determined route to Everest via Khumbu Icefall and Western Cwm was too dangerous for Jordan's summit, projected for 2010:

13-year old reaches to the top of Mt Everest

Uploaded to YouTube on May 24, 2010 by ABC News (Australia) ~ URL: https://www.youtube.com/watch?v=ujq4VjMiPxw

Romero, Jordan; with Linda LeBlanc. 2014. No Summit Out of Sight: The True Story of the Youngest Person to Climb the Seven Summits. New York, NY: Simon & Schuster Books for Young Readers.

On May 22, 2010, Jordan Romero became youngest to summit Mount Everest, which he describes at the top as the size of a small dining table:

Mount Everest, known in Tibetan as Chomolungma, which Sir Edmund Hillary's guide, Tenzing Norgay (May 29, 1914 – May 9, 1986), translated as "the mountain so high that no bird can fly over it."

No Summit Out of Sight: The True Story of the Youngest Person to Climb the Seven Summits by Jordan Romero with Linda LeBlanc

Jordan Romero climbed Mount Everest at age thirteen -- and he didn’t stop there. In this inspiring young adult memoir, he tells how he achieved such great heights.

Jordan Romero was a regular 9 year old boy. He loved BMX biking, listening to music, hanging out with his friends and family, and studying nature and reptiles. Then one day Jordan spotted a map of the tallest mountains on Earth's seven continents.

Book Review of No Summit Out of Sight: Jordan Romero and the C...

All seven continents host super-high mountains. It is a feat to summit all se... 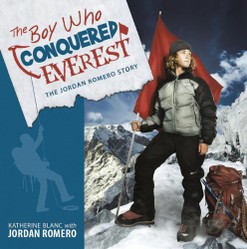 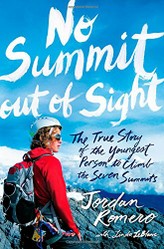 Book Review of No Summit Out of Sight: Jordan Romero and the Climbing of the Eight Highest Mountains

All seven continents host super-high mountains. It is a feat to summit all seven. California-born Jordan Romero remains the youngest to scale the eight highest summits by age 15.
22%  0   3 DerdriuMarriner
Children's Books