It deals with crimes of ritual animal and people killings in the midst of:
• challenges between Anglo, Chicano, and Pueblo cultural legacies;
• clashes between Aztec- and Zia-worshipping cultists and Land of Enchantment-concerned governmental agencies; and
• controversies over nuclear waste carriers, disposal, leaks, and sites.

Satellite image of Albuquerque, with the Rio Grande on left/west, in central New Mexico

Sonny has suspects to clear or collar with great-grandfather Elfego’s .45-caliber single-action Colt. Delfina intends upon Frank Dominic paying, as:

Struggling in the footsteps of his legendary lawman grandfather, small-time private investigator Sonny Baca seeks out the truth about his cousin's bizarre murder.

Albuquerque and Sandia Mountains at sunset

Birds Of The Zia Pueblo: photo by Chuck Sabatino ~ available via AllPosters 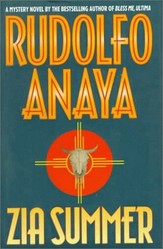 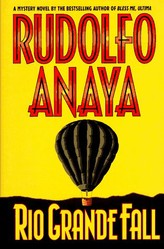