A slightly different post! This is a circular History walk for families that I wrote about the next village along to here, Bramhall, Cheshire .

Being an avid walker and historian, often when I was out on my walks I would spot pieces of history here in the community that many may not have seen.

I decided to do a history walk of Bramhall and it was more popular than I could have imagined. I then did one for my own village Cheadle Hulme and some schools bought it and had wonderful walks with the pupils looking at the locality.

I want to put it online now so it goes to a wider audience who may happen to be visiting Cheshire or Manchester and want to know a bit more about my lovely part of the world.

I present to you my Bramhall History Walk that takes the walker through the magnificent park pictured here.

STOP 1 To the right, Bramhall Library was opened on 12 July 1962 by Mrs Anne Phillipson, Chair of Hazel Grove and Bramhall Council. It opened in an old Bramhall building.

Leave the car park, cross the main road to the War Memorial.

STOP 2 Bramhall War Memorial was built in 1921 and is Grade II listed. It has an octagonal pedestal.  Designed by Reginald Blomfield, it was ‘opened’ in 1921 by General Sir Henry de  Beauvoir de Lisle who was General commanding Officer -in-Chief of Western Command in the First World War and it was dedicated by the Rev John Fleming  Jones, vicar of St Michael’s who served Bramhall for 45 years.

Facing the memorial turn right and walk along Bramhall Lane. After about 35 yards make a brief detour left along Benja Fold.

STOP 3 Benja Fold. The term ‘Fold’ in Northern England means a number of cottages placed closely together for safety. Crocus and Benja Cottages are Grade II listed.  The name Benja is believed to come from Benjamin Birchenough, who owned these cottages in the mid-18th Century. The houses, once weavers’ cottages, were built in the 17th century. Some have thatch roofs.  The old local Bramhall water pump is still here outside Crocus cottage. Go and see it!

Retrace your steps to the road and turn left out of Benja Fold along Bramhall Lane.

STOP 4 Just beyond the station bridge on the left is an Old Post-box.  This post-box has GR on it for King George V who was king from 1910 to 1936.

Walk along Bramhall Lane to the United Reform Church at the corner of Robin’s Lane. You are now in the old Pownall hamlet. ( A hamlet being  a very tiny settlement  )

STOP 5 A congregational chapel stood on the site of the Church at the corner of Bramhall Lane and Robin’s Lane. Here Pownall Hall stood on the site of the retirement flats. It passed from the Pownall family through the female line to the Brocklehurst family of Macclesfield in 1858 and was occupied by various tenants until 1968 when it was demolished. The front room was used as the local food office during the Second World War.  Opposite the United Reform Church on Robin’s Lane, you will see Weavers Cottage.  This was originally one of a group of cottages, date unknown, which were inhabited by silk weavers who took their work to Macclesfield .There was also a building which housed the silk looms. There was a police house by Pownall Green School on the right.  In 1871 the Methodists opened a chapel here and Bramhall’s first board school opened at Pownall Green in 1871.

On the left you will see School Mews, on the old school site. On your right you will see some old cottages dated 1895. The houses on the left as you walk towards Bramhall Park were on ‘’Roman Road’’ on 1907 OS map. It is believed that Bramhall Lane follows the line of an old roman road.

Walk along Bramhall Lane, down Bramhall Brow to the large roundabout.

Damery Rd on the right was on the site of Damery farm and in 1901 was farmed by the Allan family from Scotland. Before 1900, there were only fields and farms along the road. Large houses were built later. There was a very large sand pit on Bramhall Lane opposite Carrwood Rd in 1907.

STOP 6 You are now in the Bramhall Green hamlet. Bramhall Green was the original village centre opposite the park gates. Here could be found the local smithy, village pinfold, (an area where stray animals were rounded up if their owners did not supervise their use of common grazing land) the stocks, a cluster of houses including a police house, a school, a water mill (which gave way to the lane being called Mill Lane before it was Bridge Lane) Womanscroft Bridge, a pub called “The Shoulder of Mutton” and on the site of the shops, Clarke’s Farm, which was demolished in 1920.

STOP 7 Taking the first exit off the roundabout, just inside the park you will see Bramhall East Lodge .East Lodge was built in mock Tudor style by the hall tenant Charles Neville in 1880s. It is Grade II listed.  William Garner and his wife Emma farmed here in 1911.

Continue along a wide path through the park with Lady Brook on your right.

The park was a deer park in the 16th Century.

STOP 8 Bramall Hall   Bramall Hall is a medieval timber framed manorhouse.  The oldest parts date from the 14th century, with later additions from the 16th and 19th centuries. The hall was owned for centuries by the de Bromale family and then the Davenport family. The whole estate was sold to the Lancashire Freeholder’s Company Ltd in 1877.

Take time to enjoy the park. Walk to the white gate and turn right. Go past the stables on the left to the front of the house. In the courtyard you will find the stocks.

Stop 9 The Stocks originally stood at Bramhall Green which was the original centre of Bramhall. The stocks and the pinfold were by the park gates. By 1899, the stocks had fallen into disuse and were in bad repair. They were restored by the Lancashire Freeholder’s Company and later positioned in the courtyard

Stop 10 Carr means Bog or Marsh. In 1928 Sir Thomas Rowbotham of Hillbrook Grange, (which was formerly Higher Bank House) on the banks of Carr Brook, gave Carr Wood to the public to be preserved as a beauty spot forever. On the right you will see Bramhall Golf Club which was founded in 1905.  Alex Herd, the 1902 Open Champion was involved in the design. Members originally used a local farm house as a club house.

Follow the path to the end. Hardy’s Farm was to your right.

STOP 11 Robin’s Lane   Diagonally to the right, a bonfire for Queen Victoria’s diamond jubilee in 1897 was held on the land bordering Robin’s Lane, Convamore Rd and Ack Lane. This was Hardy Farm Field.  The bonfire was lit at 10pm to link Bramhall to bonfires all over Britain.

On the left opposite Stoke Abbots Cl. you will see Old Timbers Cottage which is Grade II listed. Further on the left, before you reach the church were Huxley’s Tenements in 1907.  A farmer named George Bolland farmed along here in 1907.

Turn right at the end of Robin’s Lane and walk back along Bramhall Lane.

Stop 13 Bramhall Station   The station opened with a line from Cheadle Hulme to Macclesfield in 1845. This saw the village centre move from Bramhall Green to its present location. The station master for many years was Samuel Charles Beswick who worked for the London and North Western Railway company. Diagonally opposite to the station beyond the bridge on the right was Bramhall Grammar School which is marked on the 1907 OS map.

Continue along Bramhall Lane. Cross at the crossing and walk back to the car park.

Yes the owners would have had to pay to get them back otherwise the landowner would have kept them.

Veronica, Thank you for sharing Bramhall's history with us! What happened to the strays rounded up in the pinfold? Were their owners given a chance to get them back?

Yes King George V1 post boxes are ever so slightly different. They have a V1 between the GR.

I love looking at the postboxes as I walk about.

Interesting about the phone box and King George V. So strange to think that he was king so long ago, yet. not so long ago, really.

Ty. I went to the local library looked at the archives that were there. I looked at the census returns and old maps. I got books out of the library and I visited the hall. Cheshire timber framed houses were always rather more decorated than others of the same period in Briain. The more decoration the more it showed wealth. Some of the decoration was restored during the 19th C .

I had a fabulous time doing it .

I really like the look of half-timbered Bramhall Hall because it has all those different patterns. I also like that brick church.

Your tour was very informative, but where did you get all the information for this article?

The old hedgerows are a very important indication of an areas past.

An old hedge in Bramhall Park was the only place where I have found medlar growing. It is a remnant of the time when the hall's owners used the hedges for growing fruit.

It looks lovely. So quaint and so full of history.

Built after the great fire of London in 1668, frequented by writers down the ... 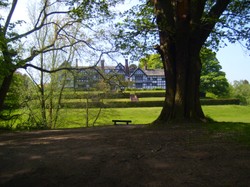 Built after the great fire of London in 1668, frequented by writers down the centuries, the pub still attracts writers and visitors from all over the world.
100%  39   15 frankbeswick
Other History