Many individuals find themselves waking every morning with sudden reminisces of past dreams. These dreams may prove to be wide and varied from one individual to another. Most dreams end up being simply that-dreams. However, for the Mad Scientist (my father) one of his many dreams is slowly beginning to come true.
On this page you will be able to see how the Mad Scientist’s Ford Maverick dream became a reality. In fact, you will even be able to see pictures of the Maverick’s progression as it rapidly gets built in my garage.

Dreaming of a Ford Maverick

Where the Dream Came From

However, the Mad Scientist’s Ford Maverick was far from original. During the time engine parts were plentiful, cheap, and easy to come by. Instead of the exceptionally common six cylinder engine, the Mad Scientist’s Maverick was fitted with a Ford 302 small block with BOSS cylinder heads, an Offenhauser high-rise intake, and a four barrel Holley carburetor. To top it all off the car was fitted with the wildly famous double snorkel Ford Grabber Hood and an 18’ lift air-shock suspension. According to the Mad Scientist he was well known where he lived for having one of the fastest cars on the street.

The Dream is brought to Life 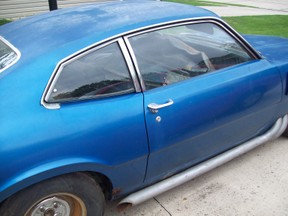 By the time I had turned 25 I had found myself in my garage rebuilding a Ford 302 small block to fit into my 1984 Mercury Capri with the aid of the Mad Scientist. At the time the Mad Scientist found himself overwhelmed with nostalgia as he slowly helped me work on my car.

This is what the Maverick Looked Like at the Beginning

Initially the Ford Maverick was fitted with a six cylinder motors and almost no interior creature comforts.

The Grabber developed from mid-1970-1975, however the duel-dome or snorkel hood was only available in the 1971 and 72 Grabber models. The snorkel hood was utilized to give the car more of a muscle car look. All Grabbers were also fitted with a Ford 302 Small Block as well.

Pouring in the mods.

Welding in the New Body Panels

Cutting out the old and...

Looking for Your Own Maverick?

Ebay has several Mavericks for Sale!

What do you think of modding the Mad Scientist's 1970 Ford Maverick?

The instilation of the TenzoR Racing Seats

The Engine Gets an Overhaul

Making Room For a Bigger Block

Keeping up with the Mad Scientist's Mighty Maverick

If interested check out B3R Garage for more updates.

B3R Garage: The beginning of Project Bonnie and Clyde
Finally getting Started one of the two 1966 Ford Mustangs. Over the past two weeks The Boss, The Mad Scientist and I were able to completely rebuild the front suspensi...

B3R Garage: Grandpa Go Fast's F100 is up and Running
This 1970 Ford F100 has undergone a lot of surgery and cosmetic repair. Take a look at where Gradpa's super Ford has come from and where it is right now. The interior ...
Updated: 03/14/2013, thepurpleturtle
Thank you! Would you like to post a comment now?
2 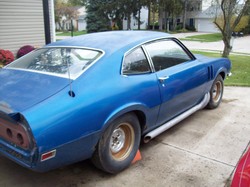 The April 2016 issue of Popular Mechanics covers the EHang 184 as personal transportation in flying cars, a prediction in the magazine’s April 1906 issue.
100%  28   10 Ragtimelil
Buying a Car