In need of a post Christmas walk outside, we went to Chadkirk Chapel yesterday. Did it matter that it was closed when we arrived? Not one bit.

Sitting around eating, socialising, going to church, visiting.... we were in much need of fresh air and exercise and where best to get that but in Cheshire, England.

The chapel is very old and believed to be on the site of an earlier church or ....KIRK …. which was the Norse name for church. This would date the original building earlier than the present one which is stated as medieval. Looking at the building, parts of it look Saxon to me.

The building has been added to over the years and shows signs of various styles of architecture. One end of the building has a tower with a weather vane.

It opens occasionally now and was closed on the day we visited but we still enjoyed it. The chapel is a listed building in England and therefore protected by law from any development.

The photos were taken by my daughter in law, L Martin

Locally” Chad " or “St Chad" is much in evidence.  Chadkirk would have probably meant Chad's church. Chad was Bishop of one of the Anglo-Saxon kingdoms, Mercia from where we have the name Mersey for a river. Locally we have Cheadle, believed to derive from Chad's Hill and another Cheadle further south.  Chad died in 672 during the Saxon era in Britain. N.B. It was not called England (Angle - Land) at this point.

Chad is believed to have established a monastic house locally and in tribute to this,  outside the chapel is a wooden carving of a monk. It is a superb piece of workmanship. In fact there are several tributes to wood sculpture in the gardens.

The building stands next to an old farm house and is reached by walking up a pathway. The far end has a half timber framed, typically medieval wall which also extends around the corner at the back.

The near end has a brick wall which contains a bricked-up window and looks older than medieval in my opinion.

Also see the wooden tower in the picture.

The chapel with a half timbered end wall.

The opposite end looks older than Tudor ( medieval ) . Look at the building materials on this end wall.

I have always liked old Walled Gardens. Obviously, ... late December … North of England... :) The garden was not looking its best but that did not matter to us. The air in this part of Cheshire is crisp and clean, the shades of green in the landscape are emboldened by our rain.

The walled garden like many others,has a tree trained against a wall and  plants. There is metal sculpture as well as wooden and the carving of the woodpecker done high up in a tree was stunning.

I have a sundial in my garden at home but it is nothing to this one!

This sun dial has a beautiful message around the edge of it. Surely this is one to live by. How lovely.

Turn your face to the sun, and the shadows will fall behind you.

St Chad's Well is an Ancient British (Celtic) Well, probably pagan which was given a Christian name. It is a traditional well where the community would have come for water.

As with other local villages, Chadkirk well is decorated every summer .

Chadkirk is a place to enjoy even when the chapel is closed. There are several woodland walks and also a canal side walk.

We really enjoyed our walk there yesterday.

Tolovaj
Good morning to my lovely Slovenia. My husband would return in an instant if he could.
Although I am a historian first and foremost, of all the Wizzley articles which fascinate me the most, are the" places" ones that you all post from all over the world.

Being realistic, I will never get to these places and to see them and experience them through the eyes of our lovely community is a joy for me. I do get so many comments about my NW England and other English places.

There are so many lovely places to visit in England but the NW locations are usually less well known and less commercialised so in my view more worth the visits.

Therefore, you are right.... who needs a tourist agency when we have Wonderful Wizzley?

What a lovely piece of history! Thanks, Veronica, for another proof we really don't need tourist agencies for a nice trip. Pictures are truly charming.

Thank you for this useful back ground information yet again. Chadkirk was no longer Catholic after the English Reformation.

It is a lovely place with great walks which you and your wife may enjoy. It is open at weekends during winter.

BSG
Thank you for this great question. Chadkirk was a very minor chapel and nothing like the great and wealthy abbeys such as Fountains, Jervaulx, Rievaulx, which Henry wanted to gain from. ( amazingly beautiful places if you ever get to UK ) However despite it's smallness and unimportance Chadkirk would have been seized as Frank describes.

All ecclesiastical buildings were either destroyed or seized under Henry the Eighth in his great act of theft and vandalism in the late 1530s. Chadkirk survived and was for a time in the eighteenth century used as a place of nonconformist worship.

The only site to remain Catholic was St Winefrid's Well at Holywell in North Wales, which was spared as a Catholic site because Henry thought that pilgrims there might bring him a profit. The site's new owner was of Catholic sympathies so he prevailed on Henry to keep it as a shrine. Henry's scheme failed and he got nothing but the sale price.

Was this part of the seizure by Henry VIII, or did it remain Catholic?

Thank you for the background information. This always helps to put things into perspective. Very useful indeed.

There is no admission fee that I know of. There is a little café inside it too when it is open. It is a beautiful place.

There are other wooden sculptures such as a huge wooden acorn. and also metal sculptures too.

In all my life I have never seen a woodpecker . This tree was part felled and instead of leaving it there they had this carving done.

Mercia was the largest of the Anglo-Saxon kingdoms, and was the last to accept Christianity. It was opened to Christianity after its pagan king , Penda, who had kept Christianity out of his kingdom, was killed at the battle of the River Winward in 629. Penda's son and heir,Pedda, opened the kingdom to Christianity. Chad was then probably a young monk and one of the first missionaries to Mercia. He became abbot of several monasteries, which he founded, and later a bishop in 664.

Cheshire was the north-western part of Mercia. The old border between Mercia and Northumbria, the river Mersey, flows a mile south of my house.

Mercia, though large, was fragile and disintegrated under Danish attack in the ninth century.

Well dressings date back to pagan times and today saw me out and about in Eas...

Most old Stately Homes in Britain have a story to tell but none more shocking... 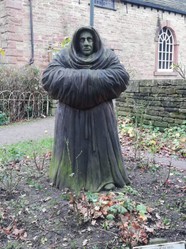 Well dressings date back to pagan times and today saw me out and about in East Cheshire again ; this time looking at some remarkable flower artistry.
57%  10   4 Veronica
Culture and Society 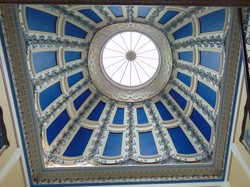 Most old Stately Homes in Britain have a story to tell but none more shocking than the Shrigley Hall with its infamous Shrigley Abduction of 1826.
Loading ...
Error!