In "Chasing Degas," author-illustrator Eva Montanari spins a charming tale of misadventures linking an impressionist painter, a missing tutu, and an upcoming recital.

What can a ballerina do when her dance bag has paints instead of her tutu?

First, she determines who has her bag and why. With an upcoming performance, she goes on a tutu hunt that involves “Chasing Degas,” one of the most famous Impressionist painters of her time!

In her search for Monsieur Degas, well known to the ballet dancers whom he paints during their classes, the bereft ballerina encounters other Impressionist painters in the streets of Paris.

Chasing Degas is a beautifully illustrated and charmingly written adventure and detective story which will entertain and inform children and adults of all ages.

Chasing Degas imagines an adventure in the exciting world of nineteenth-century Paris, France. The adventurous tale involves a young detective intent upon solving a mystery in a very short time. The plot thickens around five Impressionist painters and six Impressionist paintings in northern Paris.

The term Impressionism describes a painting style which originated in France and lasted from 1860 to 1900. The term Impressionist painter designates an artist who applies pure colors alongside each other by way of short, thick brushstrokes. Impressionist artists disdain the color black as the absence of changing light and everyday movement, both of which they revere.

One of the two main characters and four of the five supporting characters are Impressionist painters in Chasing Degas, written and illustrated by Eva Montanari and published by Abrams Books for Young Readers in 2009. Eva Montanari (born 1977) is known worldwide for her illustrations in books and magazines and on calendars and posters. The resident of Rimini, Italy respects the Impressionist style in Chasing Degas through her acrylic and colored-pencil illustrations.

The story of Chasing Degas indeed can be understood by the illustrations alone. But doing so ignores the charmingly realistic conversations and observations as the anxious ballerina follows clues and interviews witnesses. The drawings and words work beautifully together in asking: Will the ballerina have her tutu and Edgar Degas (1834-1917) his paints in time for the Opera House’s evening performance?

On the copyright page, the author/illustrator describes her plot as realistic enough to have happened even though the story comes from her imagination. For example, the plot introduces readers to six Impressionist paintings, all painted within a five-year span by five friends in northern Paris, the story’s setting. It also involves a ballerina, a favorite Degas model and subject.

The author/illustrator adds another most convincing detail: The mystery begins, and detective work is needed, because an artist mistakes a ballerina’s tutu bag for his bag of paints. Slung from the shoulder, the two bags look purse-like. Readers may ask: But what is a man doing with a purse? In France, female and male artists, dancers and students move through life with shoulder bags!

Chasing Degas is an appealingly illustrated and written adventure, detective and mystery tale. Its theme of a ballerina’s first steps to fame and happiness will entrance adults and children of all ages.

Tutus contribute to the magic of ballet: A missing tutu is cause for panic as a ballerina chases down her necessary apparel in children's story "Chasing Degas."

Monsieur Degas likes to paint the students while they practice in ballet class. But one day he mistakenly leaves his bag of paints in the dance studio and instead takes a young ballerina’s bag. And so the ballerina begins a great chase to find Degas. 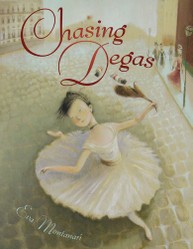 Atalanta's love of apples equals her passion for races. A handsome, clever suitor discovers the way to win her heart is by making her choose between apples and the finish line.
55%  2   7 DerdriuMarriner
Greek Mythology 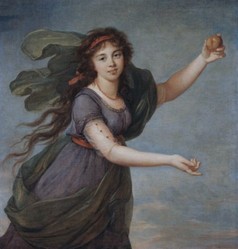