One such venue is Calle Ocho. Eighth Street operates as the major thoroughfare in the Cuban and Cuban-American neighborhood of La Pequeña Habana (Little Havana) in Miami, Florida. Its traffic patterns peak on such dates as December 24, when the guests, residents, and tourists enjoy the feasts and feats mentioned in “La Noche Buena.”

But her father expects her to keep monolingual, Spanish-speaking Grandmother Mimi company while he is out of town working until Christmas Day, December 25. The day after arriving Nina finds herself enjoying kitchen-duty with aunts and cousins:

Mimi gets everything heated in a cast-iron pot after adding:

She has Nina run big glass jars over to Uncle Tito’s backyard. The marinade is poured into a free-standing bathtub next to an in-the-ground, pig-roasting pit. It takes three days to get everything ready.

In "La Noche Buena," Nina's uncles dress up in new Guayabera shirts to celebrate the specialness of the day.

Guayabera style is popular shirt in Cuba and the Caribbean, including Caribbean area of Colombia; Mexico, and Central America: Guayabera shirt from back with details of alforza pleats and western-style yokes.

The feast commences at sunset on December 24. But it does not start until family storytellers toast the past year. It expands to include neighbors who launch traveling parties progressing through the neighborhood’s backyard feasts. It finishes with the Misa del Gallo (Rooster’s Mass). But it recommences with:

It stops at sunrise on December 25 with happy revelers going to their separate beds. Nina turns in dreaming of all her up-north cousins celebrating the next year’s Christmas Eve with her father, grandmother Mimi, and relatives in Miami.

La Noche Buena: A Christmas Story introduces ages 4 – 9+ and preschoolers through fourth-graders and onward to:

The ensemble in this “must-own” book -- printed in China and released in 2010 -- is achieved in a spirit of:

It merges the winsome talents of:

It presents learning-fun opportunities for:

Nina is visiting her grandmother in Miami for Christmas. Usually she spends it in snowy New England with her mother and her family, but this year is different. She isn’t certain what to make of a hot and humid holiday.

In "La Noche Buena," Nina celebrates the Christmas season in Miami's La Pequeña Habana (Little Havana) neighborhood, where she finds joy in differences from New England, such as no snow and palm trees.

Childrens Book Review of Adelita: A Mexican Cinderella Story b... 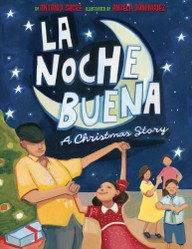 America’s Spanish-speakers esteem Church carvings as father-to-son endeavors. The carvers have set deadlines. Even snowbound, they must come through in “The Santero’s Miracle.”
66%  2   8 DerdriuMarriner
Book Reviews 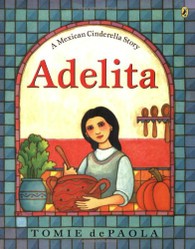