Childrens Book Review of M Is for Myanmar: Bilingual Burmese and English Story by Elizabeth Rush

The former Burma now carries the name Myanmar. Both names describe Southeast Asia’s most mysterious country. The first step to understanding is remembering that “M is for Myanmar.”

The names Burma and Myanmar are basically two ways of saying the same thing. They communicate similar information about one country. They designate the Bamar, the majority ethnic group to which two-thirds of all Burmese belong.

It gets used either alone or as part of the currently complete name, Republic of the Union of Myanmar. It is the more recent choice of the two names since its official usage just dates back to 1989. The name Burma still may be found used even though it is politically correct to think “M is for Myanmar.”

The letters of the Burmese alphabet assume the rounded shapes of broken and intertwining circles. The shapes betray the traditional instruments and materials for writing the language: styluses applied to palm leaves. The stylus configures in the writing of many of the world’s languages, from ancient Sumer’s cuneiform of about 3500 B.C. onward. It cooperates nicely with the Burmese alphabet, which combines consonant letters and vowel notations into units. The Burmese language’s writing system dates back to the tenth or eleventh century. It exists today in a fluid form which responds to:

It has to count among the world’s prettiest writing systems, as evidenced in M is for Myanmar.

In M is for Myanmar, Hla advises her younger sister -- the only family member born elsewhere -- that:

Readers of M is for Myanmar appreciate learning how to say “Hello!” (Mingalaba) in Burmese. The book attracts culture- and travel-minded readers to the country’s unique sights and sounds. It benefits from the harmonious inputs of:

Librarians and teachers generally confer upon M is for Myanmar literacy levels of:

But the guide book agelessly cooperates with parents, readers, and teachers intent upon:

Two sisters are on their way to visit their parents’ birthplace. Hla, the older sister, brings Myanmar in an enchanting way, such as Shwedagon Pagoda shining like a hundred crazy stars.

Myanmar's golden sites ~ Kyaiktiyo Pagoda over the Golden Rock on Mount Kyaiktiyo: small pagoda (24 feet, or 7.3 meters) perches atop granite boulder, pasted with gold leaves, which, in turn, is believed to balance on a strand of Buddha's hair.

Buddha - What we think we shall become: black t-shirt ~ Available via AllPosters

The primary religion of Myanmar is Theravada Buddhism.

MBC, This is a great book for children of all ages. It is done well. Buddhism has definitely left an enduring legacy in Myanmar, a unique country with great appeal for everyone, from researchers to tourists, and, yes, certainly for Buddhists from elsewhere.

This looks like a book I could read and learn from, so I'm sure it's great for children too. I'm Buddhist so I'm interested in Burma.

Spotted coats and tiptoe gaits advise wildlife of the speed and stinkability ... 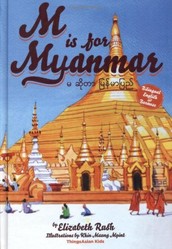 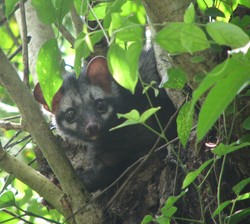 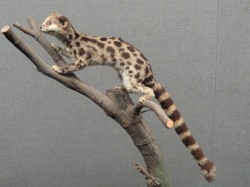 Spotted coats and tiptoe gaits advise wildlife of the speed and stinkability of African linsangs. Asia's spotted linsangs are fast too. But they never fight dirty or stinky.
Loading ...
Error!