"Madeline at The White House" follows Madeline on an adventure involving the President’s only child, an Easter Egg Hunt, and magic cherry tree blossoms.

The charming Madeline series originated by Ludwig Bemelmans continues with "Madeline at the White House."

Madeline’s adventures always end happily, in both the original and the revived series.

Is a happy ending possible when the two-day adventure involves the very lonely but very protected only child of the U.S. President?

Adventurous Madeline Fogg returns, with faithful attention to the series’ entertaining humor and illustrations, in Madeline at the White House, a book to delight children of all ages.

It appeared that Madeline’s adventures would end with the death of series creator Ludwig Bemelmans. But the series has been revived by its ideator’s grandson. Madeline at the White House is the fourth book in the revival.

A magician rabbit, Miss Clavel’s 12 schoolgirls, and First Kid Penelope Randall appear in the children’s story Madeline at the White House, written and illustrated by John Bemelmans Marciano and published by Viking in 2011. John Bemelmans Marciano (born 1970) of Three Bridges, New Jersey, is the author of Madeline Says Merci (2001), Madeline Loves Animals (2005), and Madeline and the Cats of Rome (2008). He and his wife, opera/theater set designer Andromache Chalfant, live with daughter Galatea (born 2009) in Brooklyn, New York.

Madeline at the White House begins with the dilemma of the lonely, super-protected life of Penelope Randall, the First Couple’s only child and Secret Service Agent Downs’ reluctant charge. The First Lady is in Bombay, and the President is busy. So how will Penelope enjoy the all-important, traditional White House Easter Egg Roll?

Penelope’s mother arranges for her close friend’s daughter Madeline to fly in from France with 11 little girls and chaperone Miss Clavel. “Candle”, Penelope’s nickname for her unruly locks, doubts the arrangement until red-headed Madeline steps out from the 12 girls grouped into two straight lines. The two girls insist upon staying up playing cards, dress-up, and music and telling scary stories after White House lawn festivities.

Madeline attempts to end the partying since she has an early morning return flight to Paris. But “Candle” considers this her only chance to sightsee, something that no one allows her to do. Madeline’s magician-rabbit friend figures out how “Candle” can see D.C. and how Madeline can make her plane, with a little help from some magic cherry blossoms.

Madeline at the White House is an entertaining adventure story with amusing poetry and watercolor illustrations. The author read his story at the 2011 White House Easter Egg Roll. Children and Madeline fans of all ages will be equally delighted.

The United States of America's White House sets the scene for another adventure in the Madeline series of children's books.

The Madeline series enters the twenty-first century with "Madeline and The Ca... 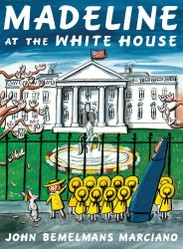 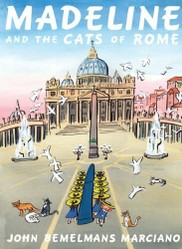 The Madeline series enters the twenty-first century with "Madeline and The Cats of Rome," an adventure involving a missing camera and stray cats set in cold Paris, hot Rome.
47%  2   6 DerdriuMarriner
Children's Books

Atalanta's love of apples equals her passion for races. A handsome, clever suitor discovers the way to win her heart is by making her choose between apples and the finish line.
Loading ...
Error!