Norse god Thor’s beloved thunder-making hammer gets stolen. His beloved Freya is demanded as ransom. Which, if either, must Thor decide is more important in “Stolen Thunder”?

It arises among ancient Germanic language-speaking cultures whose influences persist in such modern north European countries as:
• Austria, Germany, Liechtenstein, Switzerland;
• Belgium, Luxembourg;
• Denmark, Iceland, Norway, Sweden;
• Netherlands.
Outside their traditional bio-geographical confines, they also find in the twentieth and twenty-first centuries an increasing popularity which is:
• profitable for producers and publishers;
• rewarding for book-readers and movie-goers.
Much of the new-found attractiveness of Norse mythology focuses upon the rivalrous adventures of:
• Loki, god of chaos, mischief, shape-shifting;
• Thor, god of lightning, oak (Quercus spp) trees, storms, thunder.

One of the most humorous incidents in that on-again, off-again competition involves the “Stolen Thunder” from Thor’s mountain-leveler going missing.

Those who specialize in the ultimate origins of words disagree on the original meaning and source of the Norse mythological designation Mjölnir. Does the ancient derivation of its multiple spellings translate into English as “hammer,” “lightning,” “lightning-bolt,” “stone tool,” or “thunderbolt”? Whatever the primal etymology, the name gathers all of the above-mentioned meanings together for the Norse thunder god Thor and his short-handled hammer. Thor indeed identifies as responsible for his super-strength the combined accessibility of:

He knows that Mjölnir exists because of Loki’s challenging the dwarves Brokkr and Sindri to rival the Sons of Ivaldi’s inventions of:

So Thor quickly blames Loki when Mjölnir goes missing. Loki can be counted on to play games with the truth. But he dislikes being accused of a monumental theft for which another is the perpetrator and he is not a beneficiary. He follows the thunderous hammer’s trail to Asgard’s envious enemy, Jotunheim’s King of the Frost Giants. He gets Thrym to agree to exchange Mjölnir for Freya, Asgard’s goddess of beauty and love. The transfer has to be made at Freya’s and Thrym’s wedding celebrations. Thrym is so awed by Freya’s blonde tresses and muscular shoulders that he produces as a wedding gift Mjölnir. Clean-shaven Thor then stops his Freya imitation. He strikes Thrym with a thunderbolt.

Mountainous area of Jotunheimen ("Home of the Giants") derives name from Norse mythology's Jötunheimr, homeland of Frost and Rock Giants, menacers of gods in Asgard:

View from Knutshøi towards central Jotunheimen

Stolen Thunder: A Norse Myth benefits from the experience and expertise of:

The acrylic, gouache, tempera, and watercolor artwork of the Russian-born artist blend as beautifully in this 1994-released publication with its charmingly humorous retelling by the Ohio-born author as they do in the duo’s Atalanta’s Race by the same publishing company and of the same publishing date. The myth’s update cooperates with cultural enrichment-, educational entertainment-seeking readers:

Retells with drama and humor the Norse myth about the God of Thunder and how he recovers his magic hammer, Mjolnir, from the Frost Giant, Thrym.

The stealing of Thor's hammer, depicted in "Stolen Thunder," is one of many challenges to Thor by Jötnar, race of giants in Norse mythology ~

Hammer-wielding Thor is a familiar figure from Norse mythology:

Book Review of The Irish Cinderlad: Fairy Tale About a Boy Fro...

Many cultures have Cinderella stories. The rags to riches experience is not j... 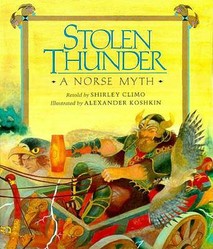 Atalanta's love of apples equals her passion for races. A handsome, clever suitor discovers the way to win her heart is by making her choose between apples and the finish line.
37%  0   5 DerdriuMarriner
Book Reviews 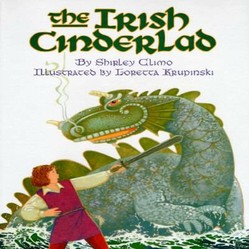 Book Review of The Irish Cinderlad: Fairy Tale About a Boy From the Emerald Isle Folklore of Ireland

Many cultures have Cinderella stories. The rags to riches experience is not just restricted to picked-on girls. Shirley Climo tells about a picked-on boy in “The Irish Cinderlad.”
Loading ...
Error!