Childrens Book Review of Strega Nona Does It Again by Tomie dePaola, Twelfth in the Series

Matchmaking appears on the responsibilities section of a witch’s résumé. Its success depends upon psychology and/or remedies. Both will be needed in “Strega Nona Does It Again!”

A southern Italian village’s wise woman deals in:
• common sense;
• herbal remedies;
• magic spells.
The proportion of extraordinary to ordinary measures depends upon the problem. As peninsular Italy’s busiest grandmotherly witch, Strega Nona draws as much as possible upon her astute understanding of human nature.

Strega Nona employs magic spells when intended results do not emerge from combined or separate inputs of:
• hard work;
• herbal lotions and potions;
• human psychology.
Grandma Witch Nona finds all of her non-magical skills and strategies super-stressed when a young beauty who suffers from unrequited love by a vain hunk shows up at her doorstep. She has her hands full since the lovesick girl is family in “Strega Nona Does It Again!”

Transplants from northern Italy may be undergoing culture shock as they make waves in settling in Calabria: first distracted Big Anthony and now spoiled Angelina, but Strega Nona relies on traditional wisdom for answers.

They deem Bambolona one of them, a familiar insider and former bakery assistant whose father, Signor Bambo, is in fact the village baker. They do not know Big Anthony’s familial background, which traces back to farmers way up north in peninsular Italy. But they embrace him as a welcome newcomer because of his hapless but permanent personal and professional links to Grandma Witch Nona. They love Strega Nona for herself and as granddaughter of previous village wise woman Grandma Concetta.

Strega Nona's practical wisdom guides her to solve personality conflicts through props, such as mirrors.

All of the villagers soon become acquainted with someone from Strega Nona’s extended family. A desperate plea comes from their grandmotherly witch’s cousin. Duke Andrea di Limone’s super-gorgeous daughter drives all but one young man in the area crazy with unrequited love.  Angelina contrastingly falls ironically head over heels in love with her super-vain male counterpart. She finds her exile at Strega Nona’s miserable despite:

Strega Nona nevertheless gets beyond unlikeable personalities when communal, familial, or individual problems require mitigation or resolution. She knows that:

Tomie dePaola holds the honor of being the only children's author-illustrator to receive the Sarah Josepha Hale Award, administered by the Richards Free Library.

Tomie dePaola thus far claims unique honors as the only Sarah Josepha Hale Award recipient known predominantly for illustrating and writing children’s books. The Richards Free Library trustees in Newport, New Hampshire, grant the award as one of New England’s most distinguished, long-standing literary recognitions. Based upon nominations by a national board of judges, the recognition has two components:

It intends to embrace the recipient’s complete works. It is not at all surprising that Thomas Anthony dePaola’s output gets acknowledged since Strega Nona Does It Again! expectedly embodies deep truths which pertain outside the author – illustrator’s target audience of:

Strega Nona Does It Again by Tomie dePaola

Strega Nona has the perfect remedy for a house guest who has overstayed her welcome and has turned everything topsy-turvy.

Childrens Book Review of Strega Nona: Her Story as Told to Tom...

Celebrities become famous for their talents. They also get known through auto...

Grandmotherly witches have special skills. But they hire like any other emplo... 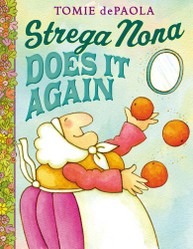 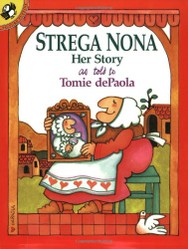 Childrens Book Review of Strega Nona: Her Story as Told to Tomie dePaola, Number Six in the Series

Celebrities become famous for their talents. They also get known through autobiographies and biographers. That is what prompts “Strega Nona: Her Story,” as Told to Tomie dePaola.
34%  0   5 DerdriuMarriner
Children's Books 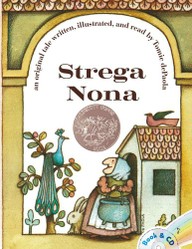 Childrens Book Review of Strega Nona by Tomie dePaola, Number One in the Series

Grandmotherly witches have special skills. But they hire like any other employer, through “Help Wanted” ads. That is why Big Anthony has a job with “Strega Nona.”
Loading ...
Error!