Such processions include daily commitments throughout the nine days culminating in Christmas Eve for communicants in Spain. They involve devilish innkeepers denying the Holy Couple five times, to the crowds’ boos and hisses.

Processions always lead to cookies and hot chocolate at the stable in “The Night of Las Posadas.”

Las Posadas ("Inns") depicts the fruitless search of Mary and Joseph for a room in an inn.

The Night of Las Posadas begins during Advent rehearsals by mountain villagers for the procession of the inns. Sister Angie directs practice sessions, whose vocalizations include:

She finds time to:

But then she gets the flu.

A young lady on a donkey and a young man claim to be:

They get rejected by five devilish innkeepers. They mysteriously leave after the Palace of Governors’ courtyard gates open. Father Vasquez lets Lupe and Roberto -- who mysteriously and suddenly arrive -- sit near the manger. Back home, Sister Angie simultaneously lights a candle:

It draws upon the impressive work ethic of:

The artwork -- effectuated in acrylic on handmade watercolor paper -- echoes the text’s message -- set in Stempl Schneidler -- regarding:

The Night of Las Posadas (Picture Puffins) by Tomie dePaola

A miracle is needed to overcome a snowstorm, which delays the lead players for the annual celebration of Las Posadas in Santa Fe.

Farolitos at Loretto During the Christmas Season, at Santa Fe, New Mexico

Santa Fe, New Mexico, is ablaze with farolitos during the Christmas season.

Mira, You are welcome. Mexican and Latin American literatures are distinctive in the worlds which they create in readers' imaginations. The journey through their literatures may be challenging because of unfamiliar symbolism but it is rewarding. I hope that you are able to find the time to pursue your interest, book by book.

Yes, I had forgotten about the luminarias :) Thank you so much for spotlighting these customs and cultures! It makes me realize how much I truly want to read more Mexican and Latin American literature.

Mira, It's quite a sight to see the candlelit, sand-filled paper-bag lanterns (farolitos) and the controlled bonfires (luminarias). There's such a sense of ancientness, timelessness, and timeliness in a setting such as New Mexico. It's a new state (just since 1912) with centuries of Hispanic and Native American cultures preceding that event.

The farolitos are wonderful on those buildings.
I understand from your article that it's a tradition to go from one inn to another in reenactment of Mary and Joseph's comings and goings. Hot chocolate and cookies sounds fabulous. Wonderful custom :) 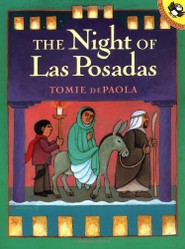