Today, dog owners have a huge choice of toys for their dog. Toys all look appealing, but some are safer than others, and some are actually dangerous, so shop carefully.

One of the biggest markets today is pet supplies, and dog toys are a huge part of that. There are chewy toys, hard toys, plastic and rubber and fabric toys. There are toys that squeak and growl and quack. So what's best for your dog? The first thing to remember is that dogs, like toddlers, need supervising! Some toys that are safe if played with while the owner is present could become a danger if no one is around in case the dog gets a tooth or his jaw caught in it or bites off a piece and starts choking. If there is any chance a toy could be unsafe, only allow the dog to play with it when supervised and remove the toy after playtime.

Buy Toys That Are The Proper Size For Your Dog

Small-dog toys are for small dogs, and don’t suit breeds with bigger mouths. What is safe for a small dog or young puppy can be a choking hazard for a bigger dog. The toy a puppy played with may not be suitable later on as he grows larger, so monitor a dog’s toys as he matures.

During teething, a hard artificial bone is good. These are made especially for dogs and last a long time, but should be removed when they become too worn.

The size of the dog is important, but so is jaw strength. A toy that may be safe for a breed like a Cavalier King Charles Spaniel could be dangerous for a smaller terrier whose jaws are much stronger. Some small dogs, especially terriers, have more power in their jaws than breeds that are twice their size, so they may need “big-dog” toys like Kongs™.

I do not recommend using real bones, whether fresh or baked. Bone splinters can cause a major health hazard if ingested. I know there are people who advocate raw food and who give their dogs bones, but I would not do it with my dogs now, and here's why. I had a 35-pound female Nova Scotia Duck Tolling Retriever that cracked open and splintered a big beef raw knuckle bone. My previous dog, an 80-pound male Labrador, could not crack these bones, but she could! I was very thankful she did not swallow the chunks before I found them and disposed of the pieces. That was the last raw bone I ever bought.

You can also buy very hard commercially dried or cooked bones for dogs. I used those for a few years, only to discover that my dogs' very strong jaws plus relatively small teeth led to worn and cracked teeth from chewing on these bones. After that, I used only Nylabones. They are in the shape of a real bone and are safe to use. However, they should be replaced once the knobs on the ends have been chewed off. Again, buy the right size! I always bought one size up from what was recommended, since my dogs really gave these toys a workout.

One of the first things to look for in a toy is whether it has moving parts that can come off or break off and become a serious choking hazard. An example is a ball with a bell inside. If the dog manages to break the ball open, he could try to swallow the bell or get it caught in his teeth.

Openings in a toy are often dangerous. Some hard rubber balls are hollow and have a hole on the side. A dog can get a tooth caught in the hole, essentially locking the dog’s mouth open. Some toys have openings to put food inside. Make sure they are safe for your size and type of dog. Any kind of hard toy and any kind of toy with separate moving parts should only be played with under supervision.

If the dog likes toys that squeak, look for a toy that has the squeaker made as part of the mold. Separate squeakers often have metal pieces inside, and both the squeaker and the metal bits are dangerous once the dog gets them off the toy — and he will!

Cheap painted toys may have lead paint. Pay extra for a well-known brand, or buy a toy that is certified safe for babies. Even so, check it over and make sure it is safe for a dog to play with.

Hard plastic toys can shatter when the dog chews them, creating sharp edges that can cut paws, mouths and throats. Soft latex or plastic toys may end up destroyed by the dog, but any swallowed pieces will pass harmlessly through his digestive tract and do nothing more than create some colourful “stoop and scoop” experiences a day or so later.

There are great new toys on the market that stimulate a dog's mind by having him push or pull parts of the toy to get at a treat. These definitely should be used only when you are there to watch, and should be put away where the dog can't get it when the game is over.

Stuffies: Some Dogs Love Them

Plush dog toys, or stuffies, come in many sizes and both with and without squeakers or noisemakers. Generally, bigger is better. Tiny toys of any kind are always a choking hazard. Some dogs will try to dismember stuffies, so generally playtime needs to be supervised, at least until the owner can be sure the toy will not be shredded.

Sometimes dogs are driven to find out where the squeaker is, and will perform surgery on the toy until the squeaker is extricated. Then it may be the dog that needs surgery if he swallows the squeaker.

Beware of stuffies made in China, unless they have a quality manufacturer's name on them. This is true of children's toys, too. Some companies use leftover fabric and foam from the factory floor to stuff their toys! They can have all sorts of contamination and are not safe for dog or child. Always check the label for “Made with new material only”.

There are “unstuffed stuffies” available now that contain squeakers but no filling, and these are safer for dogs that like to rip their toys. Your dog always should be supervised when playing with toys like this to avoid choking.

The jury is still out on rawhides. Some dog owners and breeders swear by them. Some refuse to buy them, insisting they are hazardous. The safest thing to do is avoid them unless absolutely sure they are safe. Talk to a veterinarian about them before deciding what to do.

There are two hazards associated with rawhides. One is that pieces can remain in the intestines and cause a blockage that will require emergency surgery to rectify. The other is how these toys are made. Some are cured using toxic chemicals such as arsenic, lead, mercury, chromium salts, even formaldehyde. You don't want your dog ingesting those! Some are bleached to hide rot, or even coated with chemicals to make them look clean and white.

The other problem is knowing the source. Many of these rawhides are made in countries with no standards for health and safety in the production of dog treats, or are made from hides from those countries.

Finally, there is the “ick” factor. Rawhides are hard and dry when purchased, but become wet and slimy after the dog chews on them. That slime gets all over the floor, the carpet, the dog bed, or anywhere else the dog chews these treats.

Would I give my dog rawhides? I used to, thirty years ago, but today, with most of them coming from Mexico and China, no. I just don't think it is worth the risk.

The Dangers of the Popular Tennis Ball

As a former owner and breeder of Nova Scotia Duck Tollers, I know all about tennis balls. I think many breeds are born loving the fuzzy things, but Tollers and Border Collies are total fanatics about them. I had one Toller that hid them all over the yard so the other dogs couldn't steal them, and I was still finding them several years after her death.

Tennis balls are the right size for many breeds, they bounce great, they don't weigh much, they can be squeezed and they are tough. Dogs love the fuzzy texture. And that is the problem with the tennis ball. That tough fuzz is made of an abrasive combination of wool and nylon that traps sand and grit, and it can actually wear down a dog's teeth by a significant and even dangerous amount in the case of obsessive tennis-ball chasers and chewers.

Since they are not made for dogs, I would also worry about whether the dyes used to create the distinctive green and yellow colours are toxic if ingested. Some dogs will chew tennis balls apart and swallow the pieces, causing a choking hazard in addition to the potential of toxic poisoning. It is safer to buy rubber balls, like ChuckIt! balls, especially made for dogs and that are big enough to prevent choking.

Owners of dogs with wide mouths, such as Bulldogs, need to be especially careful, not just with balls, but with any toys, because of the danger of choking.

How to Choose The Best Crate For Your Dog

A dog crate can be a bed, a refuge and protection for a dog. It's something n... 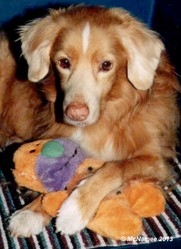 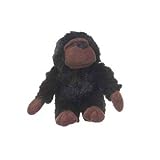 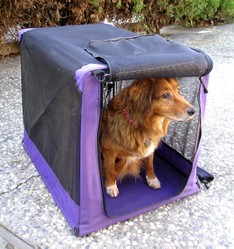 How to Choose The Best Crate For Your Dog

A dog crate can be a bed, a refuge and protection for a dog. It's something no dog owner should be without. When travelling with a dog, a crate keeps him safe.
22%  2   2 TerryMcNamee
Dog Breeders 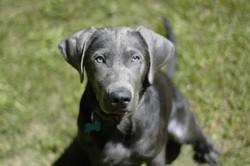