Dinosaurs Will Be On Display in Trenton, Ontario, Canada

On a little street beside Ontario's Bay of Quinte, hidden behind some trees, there are dinosaurs! And you can visit them for free on September 14, 2013.

Dinosaurs and other prehistoric beasts reside at Research Casting International, the world leader in the restoration and mounting of prehistoric fossils and modern animal skeletons for museums around the world. Usually, RCI's amazing work is done behind closed doors, but from 10 a.m. to 4 p.m. on Saturday, September 14, the public is invited to visit and see what is happening in their neighbourhood dinosaur factory at 15 Dufferin Avenue during Quinte West's annual "Doors Open Ontario". The site is handicapped accessible, and all ages are welcome.

Last year's open house attracted a steady stream of visitors of all ages who were amazed by the wonders contained beneath the building's 25-foot ceiling. They were able to talk to the artists who recreate the wonders of the distant past and learn how molds and casts are made for museums in North America, Asia, Europe, Australia and New Zealand. Many a child had a photo taken next to the skeleton of a giant reptile from millions of years ago, and people had the very rare opportunity to actually touch a genuine dinosaur fossil.

Research Casting was created in 1987 by company president Peter May, a man who is passionate about prehistory and determined to make other people passionate about it, too. The company began in a garage in Toronto, Ontario, but grew so fast that it moved to nearby Oakville in 1989 and then to Beamsville, a small town in Niagara Region, in 1998. RCI relocated to its new and current facility in Trenton, Ontario, in 2007.

The current facility's 45,000 square feet includes a metalworks shop — essential for mounting heavy fossil skeletons of giant reptiles — plus a foundry, a casting facility and everything needed to restore, mount, sculpt, cast (in metal or resin) and paint anything from rock formations to Mayan carvings to Mastodons.

The artists and artisans who work at RCI not only restore and recreate ancient beasts. They have recreated entire habitats, one leaf and rock at a time. The company even designed and built scale models of the planets from fiberglass and acrylic for display at the Rose Centre for Earth and Space in New York City.

Research Casting also does casts of fossils, dinosaur footprints and bones, and makes replicas of animals that look so real, one would think they are going to move at any moment. In fact, sometimes they do! The company has done a fair bit of work in creating animatronic dinos that move and bellow for use at special exhibitions and theme parks and even for movies and television. If you have seen the movie Jurassic Park, you've seen an RCI creation — the giant head of a Tyrannosaurex rex that terrified park visitors in the movie.

RCI has been featured in several television shows, including History Channel's Museum Secrets episode "Lost Dinosaur" http://www.museumsecrets.tv/dossier.php?o=55 about the discovery and mounting of the the Barosaurus skeleton at the Royal Ontario Museum.

RCI is also partnered with DINOLAB, founded by president Jim Madsen in the 1970s in Salt Lake City, Utah. DINOLAB was the first company to provide cast specimens for museum exhibits, and has worked with RCI for many years. “Our partnership arrangement with DINOLAB makes the world's largest collection of cast specimens available to museums around the world through a single source, providing simplified access to these rare items," May said.

Peter May Believes in Involving Kids in History

May has a strong interest in getting children involved in history and paleontology. Just north of Trenton in the small hamlet of Battawa, there is a park called Dino Dig where children can “discover” an exact replica of a dinosaur fossil frozen in rock. Exploration Playgrounds is a separate division of Research Casting designed to create special, safe playgrounds to get youngsters excited about the past, especially in towns that don't have a natural history museum.

Other Locations To Visit in Trenton on September 14

The open house at Research Casting is just one of many places that can be visited in Trenton and the surrounding communities of Quinte West this September 14. Twenty sites are included, among them the National Air Force Museum of Canada and its collection of historic aircraft, the Afghanistan Repatriation Memorial, the Quinte Branch of the Ontario Genealogical Society and much more. Many of the sites, including Research Casting, are wheelchair accessible.

Trenton, located on the Bay of Quinte between Toronto and Kingston, is readily accessed via the Highway of Heroes (Highway 401) or Old Highway 2. For a complete list of Open Doors locations, details and locations of the individual sites and directions for coming to Trenton, go to the Doors Open Ontario website.

Want to learn more about dinosaurs and prehistoric life? Here are some books you will enjoy, suitable for various ages.

The Perfect Poster For Fans of Dinosaurs! 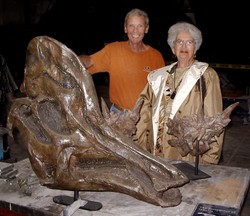 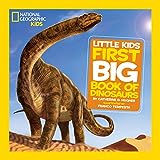 Dragons of mythology are just stories, but there are real dragons in the world today. They are quite small, and they don't breathe fire, but some really do have wings.
61%  7   6 SierraJacobs
Ontario