Thousands of years ago, someone made a little clay figurine of a horse. Little did he know that collecting and displaying horse figurines would become a world-wide hobby.

Until the mid-1960s, there were basically two kinds of model horse collectors: adults who wanted them as ornaments, and children who wanted to play with them. But two young girls changed that all on their own. Ellen Hitchins and Simmie Smiljanic were friends who both loved model horses. Although Ellen lived in California and Simmie in Indiana, Simmie would sometimes vacation with Ellen, and they and their other horse-loving friends would hold pretend shows with their model horses. They created class lists and crafted saddles, bridles and accessories. Each model had a name and was assigned a breed so the girls could keep track of how each horse did at each show. As the girls entered their teens, their shows became more sophisticated. Instead of play, they now had a hobby. They wanted to continue the shows when they couldn’t all be together, but how? They soon found a solution: photography.

Since they lived so far apart, the girls and their friends took photographs of their horses “performing” in various classes. The idea was to make each horse look as real as possible. With scale model doll riders not available, extra skill was needed to photograph the horses so they looked as if they were performing with invisible riders aboard.

Each photo had the name, breed and sex of the horse on the back. When a model horse show was planned, a class list would be created, and each friend would be notified of the class list, entry fee and date. The class numbers were written on the back of each photo in pencil so they could be erased and changed for the next show, and then the pictures, entry fee and return envelope were mailed to the person hosting the show. The horses were judged in each class, champions were named, and the photos, results and prizes would be returned to each entrant. Participation grew as other model horse collectors heard about the new hobby.

In 1969, Ellen founded the first club, the International Model Photo Horse Show Association, or IMPHSA, complete with a mimeographed newsletter that contained class lists for upcoming shows, show results, articles and ads. Simmie had printed a few pages of a fledgling newsletter as early as 1967, and a year or two later she created a midwestern club and a newsletter called Pony Express.

Both clubs registered model horses and kept records of show results. The models earned points in shows, and year-end awards were provided. Soon there were photo shows across the USA and western Canada and a national show was held each year. The first IMPHSA National Show was judged by well-known horseman and journalist Don Burt.

Meanwhile, a similar hobby was evolving in the United Kingdom. North Americans typically showed Hartland and Breyer plastic horses, ceramic Hagen-Renakers and "Made in Japan" china horses. The UK shows focused more on the British-made Julip toy horses. Julips looked more like toys than the North American models did, but they came with a huge selection of accessories, including model riders, so unlike North American show horses, the UK models were always presented with scale riders aboard.

While the first model horse shows were "live shows" in that the actual models were together at one location, the early ones were just play. This was to change quite dramatically as time passed.

The first organized “live show” where hobbyists brought their actual models instead of photos was held August 9, 1970, in California for IMPHSA members. Seventeen exhibitors took part, one from Arizona and the rest from California. Among the winners were Susie Figueira, Mary Ellen Hofmann and Laurie Jo Baier. Simmie came from Indiana to judge.

By this time, some hobbyists had began customizing models (repainting and remodeling them) and making tack and accessories both for themselves and  to sell to other hobbyists. Many of these young entrepreneurs were still in elementary school.

The next record of a live show was August 5, 1972, in Michigan. Two more were held in Chicago in 1973 and 1974, hosted by Chicago collector Marney Walerius. This would evolve into a much larger event, the Model Horse Congress. More large shows followed in California and elsewhere.

Today, there is a huge network of highly organized live shows around the world. Many exhibitors show in both photo and live shows, while others stick to one or the other. Today's shows include children as young as five and adults in their 70s and 80s, and many are divided into categories for children, novices and experienced exhibitors to give everyone a chance to have fun.

Live shows continued to push the envelope in realism to the point where today's entries use tack and accessories that are exact miniatures of the real thing, right down to every buckle on a harness and every spring on a show cart. There are even doll riders that are meticulously dressed exactly like real show exhibitors.

There is an entire network of official live shows where horses can qualify in various classes for the North American Nationals. The competition at NAN is fierce, and it takes an exceptional model horse and presentation to place in the Top 10 or win a title at the annual NAN final.

While the hobby was evolving, the original model horse showers were getting older. Most had started showing when they were between 10 and 15 years old. A lot of showers put their hobby on the back burner while going to college or university. But once they entered the work force, they had money to spend on models and tack, and they introduced the hobby to their adult friends.

By the 1980s, there were probably as many adults as children and teens involved in collecting and showing. Senior citizens who loved horses also found the hobby was ideal for them. The next step was inevitable. Adult showers introduced spouses, children and grandchildren to the hobby. Now some families actually have three generations involved in collecting, photo showing and live showing. Model horse shows also have led to lasting friendships amongst collectors, with some friendships dating back decades. It's also not just girls. Some of the top customizers, sculptors and vehicle makers are guys.

While the hobby has changed and expanded, photo showing remains popular, especially amongst newcomers to the hobby, and there are many clubs around the world devoted to it. Best of all, the model horse hobby still includes children playing with their toy horses and adults who simply love to see beautiful figurines of horses decorating their homes.

Want to know more? Model Horses 101 has plenty of information and links about the hobby, model horse manufacturers, photo showing, live showing and much more.

Thanks go to model horse sculptor and exhibitor Laurie Jo Jensen (nee Baier) for graciously providing additional information for this article. She was there from the beginning!

(This article is dedicated to the memory of the late Ellen Hitchins and the late Marney Walerius. Without them, the hobby would not be what it is today.)

Here are some books about the different model horse manufacturers and information about showing, customizing models and making your own miniature saddles. There is also a lot of additional information on-line.

Fun to read about! 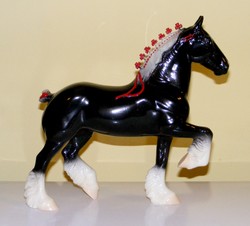