Dragons of mythology are just stories, but there are real dragons in the world today. They are quite small, and they don't breathe fire, but some really do have wings.

The phrase “Here Be Dragons” conjures up thoughts of monsters, but the word “dragon” means different things to different people. Some think of the fierce, fire-breathing monsters slain by St. George and other knights of chivalry. Others think of the dragons of the Far East, which are friendlier and represent good luck. Modern-day stories of dragons include supernatural creatures to the benevolent, genetically engineered dragons of the fictional planet of Pern as envisioned by author Anne McCaffery. What they all have in common is a reptilian appearance, a mouth full of big teeth and, in many legends, an ability to fly and to breathe fire.

Where did these dragon legends come from? Some of the possible candidates are the bones and fossils of extinct flying reptiles called pterosaurs. There are several different kinds of pterosaurs, which lived from the late Triassic period (about 230 million years ago) until the end of the Cretaceous period. They became extinct at the same time as the dinosaurs and the ancient marine reptiles about 65 million years ago, long before mankind walked the earth.

A mounted skeleton of a Quetzalcoatlus

The earliest of these flying reptiles ranged from barely the size of a sparrow to a few pounds in weight. The bigger ones had a wingspan of about two feet, a bit less than the wingspan of a modern crow. Their wings were something like those of modern bats, developed from what would have been one front finger (bats' wings use several fingers, not one) with thin skin membranes reinforced with fibres rather than feathers to create the wing surface. As they evolved, larger pterosaurs appeared, weighing up to 10 pounds and with a wingspan of three feet, similar to that of a raven.

But during the Cretaceous, which was an age of giant creatures, the flying reptiles also grew. While there were still small ones, the biggest had huge wings measuring 16 or more feet across, nearly double the biggest eagle wingspan ever measured. Even these seemed small compared to the pterosaurs of the Late Cretaceous, which were so large they may not even have been able to fly except by letting the wind catch their wings to send them soaring into the sky. The wings of Quetzalcoatlus and Zhejiangopterus stretched an incredible 30 feet across, as wide as the wingspan of a small airplane.

Pterosaurs had lightweight skeletons with hollow bones like those of birds, combined with large brains and well developed eyes. Even the biggest of the giants may have weighed only a few pounds, and their huge wings would have caught the slightest breeze to lift them into the air. They all had birdlike beaks, some of which included impressive teeth. Many had large bony crests on their beaks or heads. They were found in all parts of the world and would have been very common soaring through the ancient sky and skimming the surfaces of lakes and oceans for fish. Modern research suggests that the pterosaurs must have been warm-blooded, like birds, in order to sustain flight.

So there were large flying reptiles, big enough to terrify even the bravest knight, and with beaks (and sometimes sharp teeth) big enough to gobble up a human being. The only problem is that they died out millions of years before mankind arrived.

Fossils could have been the source of the tales of these winged reptiles, but where do the other elements of the stories come from?

The earliest stories of dragons in western Europe date back some 5,000 years and resemble the traditional dragons of the Far East, except for the addition of wings on the back. Early Greek myths included several large serpent-like reptiles, some of which were called dragons as if the two terms were interchangeable. Some dwelt in water, like the wingless Asian dragons. They resembled snakes, but had four short legs and long, toothed jaws, but did not resemble crocodiles, which the Greeks already knew about.

While eastern dragons were generally considered to be benevolent, those of the west were anything but. Over the centuries, western dragons later were depicted as huge scaled lizards with wings, long tails and big jaws. Some had only hind limbs and wings instead of front legs, while others had normal front legs and wings that were attached to their backs. All had clawed feet. They were thought to live underground in caves, rather like snakes and some other reptiles.

The fire-breathing part of the legend may have come from confusion in translation at some point in history. A Finnish term louhi, meaning rock or crag, could have been confused with logi, which meant fire. Thus a Finnish mythological rock snake (lohikäärme) became a fire snake, and when legends from various countries became intermingled, a fire-breathing dragon may have been the result.

European myths from the Middle Ages are filled with dragons, many of them guarding troves of ancient treasure. Many were depicted as serpent-like rather than lizard-like, with or without wings. Apparently the Eastern influence in the west was slow to die out. Most, but not all, were seen as evil, hence the popular depiction of knights and saints fighting them, but dragons also had positive qualities: strength, courage, ferocity and perseverance. This made them popular as heraldic emblems, and their likenesses were used on crests, flags and coats of arms of individuals, families, monarchs and even entire countries.

There are actually several types of reptiles living today in Africa and Asia that resemble the dragons of mythology in one way or another, and could have served as the source of the dragon legends in the west. First are the giant constrictor snakes such pythons, named for the Greek god Pytho or Python, who is described as variously as a dragon or as a snake. Very large pythons can reach as much as 33 feet in length. Boa constrictors are not nearly as big, but with the largest reaching 18 feet, they certainly aren't tiny! The next largest snake is the King Cobra, which can reach 14 to 18 feet and is one of the deadliest of the world's venomous snakes. King Cobras are found from India to southeast Asia, Malaysia and the Philippines.

Another candidate is the now-endangered Komodo Dragon, the world's largest and most dangerous monitor lizard. At 10 feet long and 300 pounds, these huge lizards of southeast Asia can easily kill a man. They are quite dragon-like in appearance, having long heads with strong jaws, long bodies, long thick tails and heavily clawed feet. All they lack are wings. Although they live on land, they are extremely good swimmers. Their bite is deadly, since their jaws are heavily saturated with many strains of bacteria. A Komodo dragon can eat 80 per cent of its body weight in one feeding.

But there actually is a lizard that flies — well, glides. Tiny draco lizards have special ribs with skin membranes that can be stretched out like wings from their backs, enabling them to glide up to 30 feet from tree to tree. Found in Southeast Asia from India to Indonesia, these little dragons include 45 different species and range from about two and a half to eight inches long. They come in many colours and patterns, just like the dragons of mythology.

Perhaps travellers in ancient times told stories of these little lizards, with the size of the dragons increasing with every retelling of the tale. Except for their size, the dracos would be a pretty close match for the European dragons of mythology. It could be that these tiny gliding lizards were the real inspiration for the magical tales of flying dragons that have endured for so many millennia.

Fascinating post! The miniature dragon is fantastic, you only have to imagine it around 100 times bigger than it is and you have a real dragon!

The Faery Folk of the British Isles include a wide assortment of beings. Hobs...

Like the ancient gods, mystical beings like unicorns might only exist as long as people believe in them. But were they ever living, breathing creatures?
50%  2   6 TerryMcNamee
Fairy Folklore 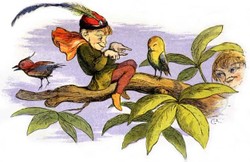 The Faery Folk of the British Isles include a wide assortment of beings. Hobs, boggards, elves, piskies and brownies are but a few of the unusual creature based on ancient legends.
Loading ...
Error!