Christmas Pudding - With Brandy Butter, Holly and Ablaze with Alcohol

Celebrated by Charles Dickens and Queen Victoria, but once banned by the Puritan Oliver Cromwell, the Christmas Pudding has its origins in a misty Celtic past.

Christmas crackers, Christmas cards, tinsel, turkey or goose, Christmas seems to need the traditional trappings and rituals we've grown used to, even if nowadays most people opt for capon or chicken. But the glorious end of the meal is always the dark brown Christmas pudding, sticky with fruit, topped off with a sprig of holly and carried to the table ablaze with ignited brandy.

Christmas is coming, the goose is getting fat, please put a penny in the old man’s hat.

Once baked in a cloth dusted with flour which gave the pudding the traditional round ball shape, a recent survey  found that more than half the puddings bought in the UK were bought ready-made, to be steamed for an hour or so in its foil basin before serving with brandy butter or custard.

Why did we traditionally finish our Christmas meal with such a spectacularly rich dessert?  After eating a richer meal than we do on most days of the year, and having stuffed ourselves with mince-pies all morning, we then proceed to overload our stomachs with this concoction of suet, fruit, flour, candied peel and whiskey, topped off with a large helping of brandy butter and sometimes cream as well.

Some say our Christmas pudding derives from Celtic traditions where round about a thousand years ago a huge cauldron of porridge was made from the good things brought in by the recent harvest.  This mushy concoction was known as frumenty and consisted of hulled wheat boiled in milk and flavoured with spices and honey.  As stirring the concoction was credited with ensuring a good harvest in the coming year, everyone in the household from the youngest to the oldest - including servants - was required to stir the pot: so the people stirred and overate at this time of celebration to ensure a good year ahead.

Later on the mixture was improved by the addition of meat, dried fruits, lemon juice and alcohol – usual eau de vie and wine.  The Elizabethans added dried plums (prunes) and thus was born plum porridge.  Although it is known that throughout the 18th century the porridge was a favourite Christmas dish, no one can say for certain when porridge became pudding.  The French ridiculed it, de Saussure writing in 1728, “Everyone from the King to the peasant eats soup and Christmas pies.  The soup is called Christmas porridge…a dish few foreigners find to their taste.”

By the early 1800s meat had been dropped from the recipe and when the dish made its appearance at the royal table of Queen Victoria and her Consort, Prince Albert, half a century later, its future was assured.

Rituals Associated with the Making of Christmas Pudding

There are rituals associated with making the pudding which purists insist on following, i.e. it must be made on a certain day, each member of the family must stir it, it must be stirred from east to west in memory of the journey of the Magi (pagans stir from west to west to commemorate the passage of the sun once worshipped as a god), it must have silver hidden inside it (money or charms) to bring worldly wealth, it must have a ring hidden inside it to betoken marriage, it must be decorated with greenery and finally, it must be drenched in alcohol, set ablaze and carried to the table still flaming.

Traditionally, puddings are made on the Sunday before Advent (December 1st) on what is commonly called Stir-up Sunday.  As the act of stirring brings good luck, or so it is said, each and every menber of the family must take their turn with the spoon.

Some who Hated it, Some who Love it

Oliver Cromwell, the revolutionary English puritan, saw a pagan connection in the pudding and banned the production and consumption of Christmas puddings in 1644.  “…. Idolotrous things which are to be avoided by all good Christians” he decreed.  He would have thrown all the members of the Gloucestershire-based Pudding Club into jail, for the pudding served at their Christmas gathering is 30 centimetres in diameter and serves around 30 people.  As the huge Christmas pudding is carried in high and flaming, napkins are waved about and cheers break out.

Along with tinsel, Christmas cards, crackers and bright shiny baubles, the Christmas pudding is part of a tradition that seems to go from strength to strength each year.  Queen Victoria and Albert loved it, Charles Dickens loved it and immortalised it in A Christmas Carol but the Puritan, Oliver Cromwell, was definitely not amused. 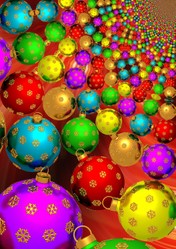