Cinnabar red chanterelle mushrooms flash flamboyantly across North American landscapes east of the Rocky Mountains from July to October. Their enticing exterior mirrors a deliciously healthy interior that may be appreciated in a parade of recipes. Chanterelles may be enjoyed in a variety of culinary formats, including:
• fresh;
• baking;
• boiled;
• grilled;
• sautéed;
• steamed.

Culinary appreciation: the flavor and visual impact of red chanterelle mushrooms in cuisine

While red chanterelles shrink somewhat during cooking, their vivid color does not fade but instead adds tantalizing brightness to the menu.

Their flavor, which slightly intensifies with cooking, imparts an enticing pepperiness to the menu. This pepperiness blends well with other flavors.

Red chanterelles should never be blasted with high heat, which toughens them.

Red chanterelles release liquids during cooking, so, especially in sautés, only a judicious amount of lemon juice or butter is necessary. For example, half a lemon's worth of juice suffices for each half pound of red chanterelles.

Casseroles, quiches, and risottos welcome red chanterelles as an ingredient.

This delicacy also enlivens meat, poultry, and seafood recipes visually while regaling the senses of smell and taste as well.

Harvest cinnabar red chanterelle mushrooms either by slicing with a knife or by plucking out of the ground:

A 13-year study in Pacific Northwest forest in Oregon gave an edge for future growth to the plucking method.

If unable to clean immediately, place uncleaned red chanterelles in a waxed paper or brown paper bag and store in vegetable crisper for up to three to five days.

Use water sparingly while cleaning red chanterelles as they quickly become waterlogged. Therefore, washing under running water or soaking the freshly gathered red treasures is not ever recommended.

Remove as much debris as possible without water.

Place for airing on paper towels or soft, fluffy cloths.

Note on storage after cleaning:

After cleaning, red chanterelles respond well to a few days of refrigeration.

Most chanterelles, including reds, do not respond well to preservation through dehydration, which emphasizes a disagreeably tough, chewy texture even after rehydrating.

For manual drying, thinly slice after cleaning and nestle slices on paper towels atop screens or trays in a sunny, ventilated location for one to two days.

To rehydrate, barely cover with warm water. Allow to sit for at least 15 minutes.

Reserve this soaking liquid afterwards as flavors from the dried reds are released into it. This flavored liquid may be added to gravy, rice, stews, etc.

Red chanterelles emerge unscathed from proper freezing. It is important firstly to dry sauté reds in a pan over medium heat. Heat causes them to release stored liquid. This moisture then evaporates.

Sealed in freezer bags, reds rest nonchalantly in freezers. Removed for thawing, even a year or longer afterwards, reds awaken with gusto with their color, flavor, and texture all virtually intact and ready to please.

The addition of oil -- of which my favorites are olive and sunflower -- at the beginning and at the end captures the above-mentioned, fat-soluble virtues of red chanterelles.

1. Deposit red chanterelles in a pot and add a bottle of white wine (my preference is for Riesling or Sauvignon Blanc), along with several teaspoons of oil.

2. Squeeze one lemon -- or splash 2 to 3 tablespoons of lemon juice -- over the mushrooms after cooking and then toss several times.

3. Set a sufficiently-sized colander into another pot and empty the mushrooms and their cooking liquid into it.

4. After the liquid has mostly drained from the colander, pack red chanterelles into sterile jars, leaving at least one inch of headroom, that is, clearance from the jar lip.

Store in the refrigerator, where these pickled treasures await their next command performance, lasting easily for one or two years!

Conclusion: From nature to the table with cinnabar red chanterelle mushrooms

The lengthy fruiting season for cinnabar red chanterelle (Cantharellus cinnabarinus) mushrooms, a New World native species, runs from June or July to October, in wooded landscapes of southern Canada and of the United States east of the Rocky Mountains.

Harvest cinnabar red chanterelle mushrooms either by slicing with a knife or by plucking out of the ground:
A 13-year study in Pacific Northwest forest in Oregon gave an edge for future growth to the plucking method.
Mushroom Observer image 51658: Dan Molter, CC BY SA 3.0, via Encyclopedia of Life @ https://eol.org/pages/1008137/media?page=2freshly picked cinnabar chanterelles

Chanterelle Mushroom Fairy: each mushroom, especially the resplendent chanterelles, appears magically, sprouting beautifully above ground, as though fairies had waved their magic wands

Chanterelle Dreams, Amanita Nightmares: The Love, Lore, and Mystique of Mushrooms by Greg A. Marley

We are acquainted with zucchini thanks to Italian cuisine. An easy recipe fea...

UGLI fruits are native to the Caribbean island of Jamaica. Seemingly unattrac... 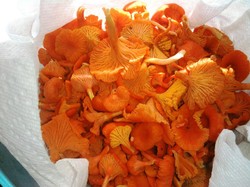 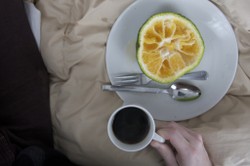 UGLI fruits are native to the Caribbean island of Jamaica. Seemingly unattractive exteriors give no hint of their delicious, luscious, nutritious interior.
Loading ...
Error!