Civil Society: an option besides state and private

Civil society is the voluntary sector distinct from the state and from free enterprise.

At his election David Cameron, The United Kingdom's prime minister, advocated the development of "The Big Society" in which individuals and communities would band together for collective purposes. Poor Dave! It was a non-starter on the scale that he wanted, and his Labour Party opponents caricatured it as a means of cutting down state expenditure, which it wasn't. Yet while the term is inadequate, the idea has worth. Cameron was talking about civil society, and this needs to be developed as complementary to state and private enterprise.

Examples of Civil Society in Operation

The United Kingdom is suffering a major housing shortage. As one of Europe's most successful economies it attracts migrants seeking work, mainly from other European countries. In parts of the land, the South East notably, but also other wealthy areas, the pressures on housing consequent upon the situation are enormous, and prices are soaring, now to the point that purchasing a property is beyond the reach of many. But renting is increasingly  expensive, and rents are soaring in places, as rent controls are anathema to the present government. The anti-European United Kingdom Independence Party is making inroads as voters feeling immigration pressures, notably in  the South East move to them. They offer a quick, unintelligent fix, but as the system fails, what is to be done?

In the Independent newspaper today, 2 March 2015, we saw a possible solution: In the village of Beer, in Devon, an idyllic area of South West England, local families established a community land trust. In such pretty English villages houses are snapped up by rich people keen to be country dwellers, and many keep second homes while villagers cannot get a first one.  The villagers asked the council to let them purchase building land and commissioned a design of seven homes, one for each of the member families, then they managed the project themselves. This is an example of civil society at work. It is community enterprise, not primarily for profit, but not opposed to it.

Another form of civil society in action is the Landshare project established by the successful celebrity chef and restauranteur Hugh Fearnley-Whittingstall. Hugh is concerned that food security in Britain is limited, so he wants to encourage communities and individuals and communities to grow their own. To achieve his goal his project seeks spare land to turn into allotments and smallholdings [in US parlance, community gardens and small farms.] Some councils have co-operated by providing land,  while generous landowners have sometimes provided an acre or two. As a result families have land for cultivation.

Civil society also includes charities, such as churches, trade unions  and food banks, along with a range of voluntary, non-profit organizations. There has been in Britain a long history of generous voluntary action, but in recent years it has become extended to self help activities of the kind outlined above. This is because people are seeing the inadequacy of the state to help them and the unwillingness and incapacity of capitalist institutions to assist on their own.Something else was needed, and the rebirth of civil society was an answer to the problem.

Civil Society: an option besides state and private

A combination of strategies

The West has still not recovered from the sterile capitalist versus socialist conflict that peaked in the nineteen eighties. The left favoured state action,  and the more strongly left wing characters opposed even self-employment, for their vision was that everyone would be an employee of the state, which would make all the important economic decisions. That communist states were a complete economic mess was dismissed with the claim that communism had never been really tried and that their defects were down to the fact that these societies were really state capitalism, a nonsensical excuse to underpin the ever-receding dream of the happy, successful socialist society.

Unfortunately, in 1979 Britain reacted by electing Thatcher, an arch-exponent of capitalist individualism, and she unleashed a strategy of high interest rates, withdrawal of the state and privatization that produced massive economic and social misery.Thatcher was a plutocrat who regarded working people as dispensable and ran an unjust society, for whose errors and misgovernment many are still paying.  Wiser, moderate thinkers were caught between two extremes neither of whom was disposed to change its ideological stance.

But the moderates were correct. What is needed is a  balance, and this must be fine-tuned to achieve maximum results. Just as a physical object has three spatial dimensions, a society has the following dimensions: a state, private enterprise and civil society, a network of voluntary charitable and self-help institutions. The old right-left model saw the different dimensions as competing alternatives, but the model above sees them as complementary aspects of social and political life.

Let's take the example of the community housing project cited above. It started with a self-help initiative, but alone that was not enough. The local  council got aboard the scheme and backed it. While they took no  responsibility they made land available and cleared the way,using the strength that the state possesses to make decisions. But private services were hired to perform some of the jobs, where necessary.  This is an instance of the three sectors working together to the public good. It is a win-win situation. While the big builders might have been able to get a project done, would the successful families have been able to afford the homes? Not necessarily.

Key to the success of this strategy is that the three sectors need to be strong. If one is weak, then the others do not benefit. Just as we do not necessarily lose width if we increase length, so a stronger civil sector does not imply a weaker state or private sector. Furthermore, in this country, the UK, where there is an issue of the privatization of public services by tendering out to profit making organizations, the civil sector could fulfill a role of managing state services without the drain on the public purse to private profit. This must be an attractive option.

In the Mediaeval period there was a thriving civil sector, and the Catholic Church was a major part of it. There were also craft guilds that supported their members. Much of this civil sector was centred on monasteries and parishes; sadly, England's worst king, Henry the Eighth, closed the monasteries and all the services that they provided to fund his lavish lifestyle and war debts, and in the process set English society socially and politically back for centuries.

In the nineteenth century self help organizations thrived. During the Victorian period friendly societies that provided benefits for members developed, trades unions began to rise to replace the old craft guilds, and note that the church never opposed craft guilds, whereas capitalists tried to stifle trades unions. Co-operatives began to develop. Certain churches were strongly involved. While the Catholics were still recovering from centuries of persecution, the Methodists and the Quakers were at the forefront of social reform and were behind much self help.

In our day churches are involved in food banks, and there are encouraging examples of mosque and church working together, a case in Lancashire, England being a good example, where Muslims decided to help the poor by co-operating in a Christian-run food bank that provides food for those who cannot afford to buy it. Yes, folks, there is hunger in our supposedly advanced society that is due to benefit problems and disgustingly low wages paid by companies whose chief executives can often command huge salaries. Churches also are involved in credit unions that help the poor avoid excessive debt and unscrupulous lenders. The Church of England under Archbishop Justin Welby is a major player in this project to squeeze out the payday loan companies that are exploiting the poor.

Religious organizations are good at civil projects. Their members have energy due to their spiritual enthusiasm, and they have the organization to get things done that individuals alone do not have or would have to spend time developing. Their members also have a high level of altruism. This is not to say that non-religious people do not have these, but that religions, particularly Judaism, Christianity, Islam and Sikhism, have much of these qualities in abundance.

Most people nowadays are aware that the issue is not between state and free enterprise, with the exception of a few extremists, but the best way to run a society is to ensure that its various dimensions are strong and able to thrive. A state strong at local and national level allied with well run businesses and a well organized and responsive civil sector is the recipe for successful, happy society.

Thanks, after the political misery of the general election in the last week I could do with some positive comments. The party to which I belong was heavily defeated.

Your conclusion is a sound one!

What you are saying is what I said in my article on John Stuart Mill.

No matter what country we live in, government needs to back off and stop trying to control our lives. We do need some government services, but just like children must leave their parents and live their own lives, we citizens need the opportunity to live our own lives freely as long as we do no harm to others.

Read the book, Small is Beautiful, by Schumacher. It is an enlightenment about how society should be run.

I see many ideas here that can also meet the requirements of third world nations. While the problems of these countries are many and multi-fold, the issues are universal. Homelessness, poverty, jobs, medical facilities, population explosion are some of the grave problems haunting them. The civil society can be a step towards solving these acute problems which have become difficult to manage with conventional means. 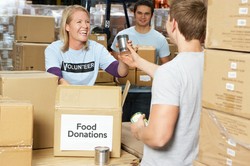