The Clovis to Republic coin series honors those who shaped modern France through their leadership.

In 2011 the Paris Mint started minting those who had a significant part in forming
current day France. These coins have come out at a rate of three each year
honoring three people each year, and as the name indicates, the series starts with
Clovis. These coins are available in both silver and gold, and the ten euro silver
coin is the most economical way to own one. They are still at reasonable prices,
and the mint even continues to have some.

The introduction image is allowed by the Amazon affiliate program. The book shown is included below.

Coins Honoring the Past Leaders for Many

These coins go much further back than France as a country in honoring leaders.  Clovis was the man who united the Franks, but the Franks were a Germanic people.  They formed a power in the world that would evolve into present day Europe.  In fact, many countries in Europe have populations that come from the Franks.

Clovis is also credited with bringing Christianity to Europe in a major way.  His wife led him to conversion, and when the leader converted his people soon followed.

Even the monarchy of the United Kingdom can claim Charlemagne in their line, which means so was Clovis, since Charlemagne is a direct descendant of Clovis.

Charlemagne was crowned the first Emperor of the Holy Roman Empire in the year 800 during Christmas Mass.  His claim was that it was totally unexpected.  He ruled over a vast empire consisting of much of Europe.  Over the years the empire was divided by heirs until it fragmented into small units, no longer one great nation.

Coin of the Year

Keepsakes of Our Ancestors

If you can trace your linage to a royal family of any fragment of the Holy Roman Empire you probably descend directly from both Clovis and Charlemagne.  Actual coins from their reigns are rare and expensive, but a coin from this series can be a great heritage coin for many.  Even if none of your ancestors can be traced to royalty, these men probably led your ancestors, so why not celebrate your heritage with an effigy of a forefather?

A Rich Heritage for the French

This entire series is a tribute to the formation of present day France.  So, while the French heritage diverges from the heritage of other countries, you can celebrate the series as depicting these who gave the world French culture, even if you only celebrate some of these men.

In looking through my genealogy I can get back to Charlemagne and Clovis.  The branch that gets me to these men goes through England.  But, other ancestors came to the United States from France via Nova Scotia and Quebec.

I have little memory of the event, but in my childhood I was taken to a parade.  This parade was to honor Charles de Gaulle who was visiting the city of New Orleans, where I then lived.  Charles de Gaulle was a personal participant in the parade.

So, much of this collection has some personal meaning to me.

This article contains links to affiliate programs from some or all of Viglink, and Ebay through Viglink, and Adsense advertising.  These must use cookies to allow for proper crediting.

In our country we mint only two special coins per year - in four kinds of prints (apart from official series of all coins, which is also aimed at collectors only) and it's a pity to see how many opportunities are lost because there is no clear vision of goals to achieve. They also abandoned the existing plan for subscribers and it looks they sell less and less coins each year. In France apparently have a better plan.

I started about 50 years ago, but now mostly buy and sell on my website, and pass along information like this. It is never too old to start. what most people do is pick one kind of coin to start with, and look through change. It is the least expensive way. Get a folder and tr to fill it, then add other kinds of coins when you are ready. If it is of interest, then you can start buying.

Since how many years are you collecting coins? I am just curious - I want to know if I am too old to start collecting.

It must be amazing to collect coins. Not only is it so satisfying, it increases one's knowledge and financial status as well. 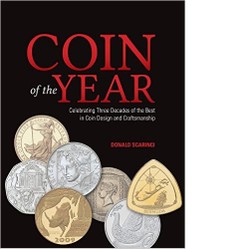 Coin of the Year: Celebrating Three Decades of the Best in Coi...
69%  9   6 blackspanielgallery
Coin Collecting