Coffee can be hit or miss

New studies indicate that taking a small amount of caffeine just before a Power Nap may have huge benefits in alertness.

Caffeine is by far the most widely used drug in the country. It’s engrained into the culture of most nations on the planet, and is widely accepted as a reasonable way to wake up,  kick and pump up your mood. Were it not for that morning cup of coffee,, no doubt you and your co-workers would be a… less than pleasant presence around the workplace.

As common consumers of caffeine will know well, there are some significant drawbacks to caffeine:

Of course there are also some terrific benefits of caffeine:

The most effective way to beat your afternoon fatigue is a power nap. If you are one of the millions of people who cannot choose to take a quick power nap rather than frequent trips to the coffee machine I’ve got great news for you, they are not mutually exclusive.

Get Excited! I know it sounds strange but, new studies has shown that caffeine and a power nap can live in harmony, when done correctly.

It goes by the name of the caffeine power nap, and here’s how it works:

As it turns out, It’s a little known fact that caffeine takes at least 20 minutes to work into your body. The immediate feeling of elation you feel after your first sip is for the most part a creation of your brain in anticipation of the drug

Research from the Sleep Research Laboratory of Loughborough University in the United Kingdom suggest that drinking a cup of coffee and then immediately taking a power nap combining the nap with caffeine is much more effective than either of them used separately. The study was interested in graduate students, and watched them while they did a driving simulator to measure their likelihood for accidents. They limited the participants to 5 hours of sleep the night before, and during the study the participants take 30 minute breaks in the middle. A percentage of the participants  were allowed a regular nap, some just sat and took no nap, still others combined caffeine and a nap. The researchers found that combining caffeine with a nap was by far the most effective.

Twenty minutes is the most suitable amount of time for a quick power nap to increase  and alertness. A cup of coffee  if taken just before  a 20 minute Power Nap is kind of like spring loading your brain. The result? A kind of super nap, where you wake up at the end of your nap not just refreshed, but energized and motivated with the extra power that caffeine normally gives you.

Coffee drinkers rejoice, you can still have your coffee. In fact, you might be better off if you do! The caffeine power nap may just be the most effective, the safest, and most productive way to take a break during your workday. As always Stay Awake! Stay Alert! Happy Napping!

The length of the perfect power nap

Why most people don't nap

The Pitfalls of power naps

I had no idea it took 20 minutes for caffeine to have an effect! 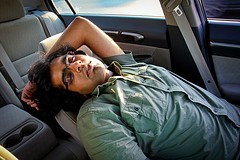