The introduction image is a Perth Mint image, which is allowed for Black Spaniel Gallery to display.

How the Mints of Australia Have Been Located

In this piece I will concentrate on the decimal pieces, and include both commemorative and bullion coins from the Perth Mint.  The series below offer a good view into the quality and variety of coins produced by the Perth Mint.  Others also exist, but these are perhaps among the more significant series of Perth Mint coinage.

The Perth Mint produces bullion coins in silver, gold, and platinum.  The silver coins include several long running series, the Lunar Series which is now in its second version, the Koala, and the Kookaburra.  Recently, a Kangaroo Silver Bullion Coin has been added.  Yes, silver kangaroo coins have been around for a long time but until now the kangaroo has been associated with the Royal Australian Mint.  Perth has produced some higher quality proof kangaroo coins over the years, but the basic, annual silver kangaroo coin has traditionally been associated with the Royal Australian Mint.  Other silver coins have been introduced by the Perth Mint, including the Funnel-Web spider and a couple of other coins.  Whether these survive is yet to be determined.

Gold bullion coins in both series of the Lunar coins exist, and so do gold kangaroos.  Earlier gold nuggets, coins featuring the image of a gold nugget, are also Perth Mint products.

The Perth Mint platinum bullion series is the Platypus.

The bullion coins come in a multitude of sizes, including fractions of a Troy ounce up to ten kilograms.  Not every size is minted every year for each of the variety of issues, but the popular one ounce coin is available for all silver bullion coin types.

One carry over from the time when British coin denominations were popular is the Gold Sovereign.  It is unlikely this popular gold coin will be discontinued in the near future.  This coin signifies too much of Australian history to be discontinued.  Actually, multiple gold sovereigns exist, including half sovereigns.

The Perth Mint has issued some tributes to the Holey Dollar.  The history of the holey dollar is that when Governor Lachlin Macquarie arrived in Australia he had Spanish dollars punched so as to make a hole in them.  This gave the people two coins from one, the holey dollar and the dump, or inner part.  This was done to alleviate a coin shortage.

The Australian Antarctic Territory coin series is an incredible, long running coin series containing some of the beautiful enamel coloring that the Perth Mint is known for.  And, there has even been glow in the dark enhancement applied to the Aurora coin.  Then, it also has the advantage that the subject matter for these coins lends itself to depicting the great beauty of nature.

Treasures of the World

The Treasures of Australia coins series had a unique design where coins had windows in which a few small precious stones, gold flakes, or pearls were placed.  These were issued in a five coin series, and available in both silver and gold.

The Perth Mint has introduced coins shaped like the map of Australia.  These unique coins make quite a visual impact, and should be considered for a collection.  They are, in addition to their unique shape, quite colorful as well.

The Mint on Demand Silver and Gold Coins

The Perth Mint experimented with rectangular gold and silver coins that had their mintages declared after the coins finished their year long run.  These were coins that had the collector uncertain of the final mintage numbers until after the coins were declared finished at the mint.  It made an interesting question for a collector, will the coin have a high or a low mintage when the run ends?

If it is unique precious metal ingots that gets your attention consider the Argyle Pink Diamond bars.  These are minted in gold and in platinum.  Each bar has seven pink diamonds inset into it, producing an incredible appearance.  Of course these come with a price that precludes most people from owning one, so the mintage is low.  They are numbered right on the bar, and the total mintage is also stamped on each bar.  They contain one Troy ounce of precious metal per ingot.  They have apparently become an annual addition to the minted products of the Perth Mint.

The only negative here is that the ingots have no denomination associated with them, so they cannot be called coins.  But, the good news is the ingots are now joined by a gold coin.  It is also described on the page brought up using the link above.

New Releases by the Perth Mint

New Releases by the Perth Mint 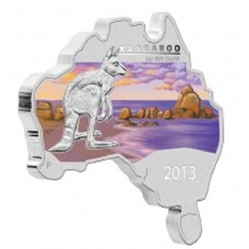