Choosing the right client to play Salem can mean the difference between life and death of a character.

To be able to play the crafting MMO Salem, one of the things you need is a game client. There are a few clients available that are based on the default client, but with added features to improve gameplay. Some may say it is cheating to use modifications (mods) like this, but when comparing the default client, or Vanilla – as it is called, to the most popular modified client, Ender’s client, many will say it is a necessity more than cheating.

Before we get started I would like to recommend reading up on what kind of game Salem is - unless you know already.

Visible options menu
This menu is visible at all times making it much easier to access the somewhat hidden logout button. Ender’s client can hide and show this menu, but the button for it is very small and often causes clicking outside the window (PC).

Action bar
Only one bar available made for numeric keys. It is slim and doesn’t take up much space.

No clutter
The overall placement of menus and bars are tidy and neat.

Camera motion
There is only one camera option available and it currently distorts the proportions completely, giving players headaches and seasickness when moving around. The developers have announced that the camera is “subject to change”.

Ender is a player and user of the Salem forum who has taken on the project of supplying the Salem players with a reliable client that, unlike Vanilla, doesn’t work against you. There are those who have suggested that the developers at Seatribe should hire Ender as a UI (User Interface) developer.

The most notable improvements are:

Improved mini map
The mini map shows not only items that can be foraged, such as berries and mushrooms, it also shows enemies – both humans and animals. Snakes are quite difficult to see on the ground and since they are venomous they can be quite the nuisances.

Camera options
There are several camera options to choose from. Some are fixed in one place and others follow the character in a smooth motion.

Storing mini map
The client has the option to store 100x100 pixel images that, coupled with a separate program, can be put together to create maps - a small feature that makes such a difference in the long run.

The mini map can also be moved and resized, which is needed to properly access the shown options menu. It appears underneath the mini map when shown.

Action bars
Ender’s client has 2 action bars - one for numeric keys and one for F-keys. The bars can be moved, rotated (vertical and horizontal) and locked into place. Each bar also has “sub-bars” that can be accessed with key combinations.

The only downside is that these bars are slightly wider due to the lock and rotate options. Mac users also can’t use the F-key bar effectively as it requires the use of the FN key to activate the keys.

Dig tool
In my opinion, this is the most important feature of the Ender’s client. Activating it and selecting an area on the ground shows the elevation of each tile. Many buildings and structures require flat land to be built and it can be quite difficult to tell if a tile is really flat or not by just looking at the ground.

There are lots of other, minor, features that reduce irritation when playing. For example, the position of all windows is remembered between closing and opening them. The default client returns all windows to their original starting position.

Detailed video on the user interface of Ender's client - by Eegorevids

Using the default Salem client may be the way the game was supposed to be played, but in my opinion, it wastes valuable time on focusing on “the little things” – time that could be better spent scouting the surrounding area for enemies.

The only downside with Ender’s client is that Mac users with older OSX versions may experience performance issues when using the dig tool while running iTunes 10, coupled with one or more applications.

The Ender’s client can be downloaded here.

Poll: which client do you use?

Review of Salem (Beta, Dec 2012 – Jan 2013)
Ever wondered what it might’ve been like for the Pilgrims that set foot in the New World? Salem, the game, might shed some light on that.
Salem (Beta, Feb 2013) – What are ‘inspirationals’, proficiencies and skills?
To survive, and perhaps even be successful in Salem, a character needs to learn skills by studying inspirational items to gain proficiency points.
Salem (Beta, Feb 2013) – The temptation of Gluttony
Gluttony is viewed as a deadly sin – but not in Salem. Instead, it is a means to develop a character’s capabilities. Time to look into the very basics of fine dining.
Salem (Beta, Feb 2013) – Settling down on a personal claim
Building your own property in Salem can turn into a massive migraine without proper planning. This article brings up most of the things to think about.
Updated: 03/16/2013, Wournos
Thank you! Would you like to post a comment now?
5

Jo, I can't play without it. I started using it right away after learning about it and when I switched back to default for a temporary session after an update, while waiting for Ender to update his client, all the little things that I had gotten used to were nowhere to be found. *fidget fidget*

If both of you are recommending the Ender client, then that's for me too. :)

The good thing with the developers are they are only 2(!) and they take in a lot of feedback from the community while still trying to keep the game to their liking. But they could use a little help on the UI front. ;)

Definitely will be going with Ender's client - especially since it's developed by someone playing the game. Companies are great at building the core of a game, but additional wants are only known by the players themselves.

Ever wondered what it might’ve been like for the Pilgrims that set foot in th...

So you have signed up to play Salem and have, or are about to, create your ch... 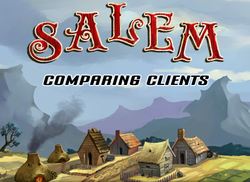 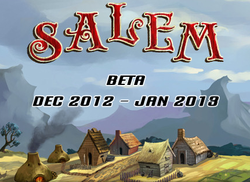 Ever wondered what it might’ve been like for the Pilgrims that set foot in the New World? Salem, the game, might shed some light on that.
54%  7   5 Wournos
PC Games 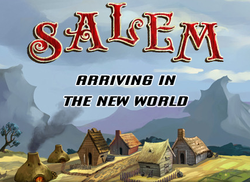 So you have signed up to play Salem and have, or are about to, create your character. Now what? This article sheds some light on the first steps in the New World.
Loading ...
Error!