Watch out...horrible little rubber "things" from the late 80s have been released from their cages and are coming after you...introducing...The Boglins!

Mattel has long been a steady force of creativity and craftsmanship when it comes to creating original and interesting toys.

In 1988 they introduced a new line of strange, ugly and unpleasant creatures with warty skin and bulbous, realistic looking eyes that "came alive in your hands." These were the "Boglins," repulsive rubber rejects from the sewers that delighted kids of all ages and continue to have a cult following to this day.

Come along with me as I track down the history of these wretched abominations and reminisce about the relationship I've had with MY Boglin over the years...

The 1980s saw a boom in "latex" creature effects in movies.  Make-up legend Dick Smith ("The Exorcist," "The Godfather") had popularized the use of liquid latex, an adhesive chemical compound that dried quickly and created a flesh-like "skin" around anything that was treated with it.

Movies like 1980's "Altered States" and 1981's "American Werewolf In London" displayed the potential uses of latex skins as a powerful, fleshy effects and creature tool.  By the late 80s latex use was so widespread the appearance of it in a fantasy film became something almost unto fetish, and often unto overkill.

In the middle of this era was born the "80s rubber monster" movie subgenre.  While technically most of the credit belongs to Joe Dante's 1984 film "Gremlins," it was the many copycat films that really popularized the genre.  Films like "Critters," "Ghoulies," "Munchies" and "Spookies" playing in heavy rotation on pay-cable channels to wide-eyed audiences of all ages made these elastic beasts household familiars.  Similarly, the third film in the original Star Wars franchise, 1983's "Return Of The Jedi" opened with a sequence filled with wiggling, rubbery, Muppet-like organisms that brought delight to the hearts of young effects enthusiasts everywhere.

The time was ripe for a mass-marketed "home" version of a rubber effects-film-type monster toy.

There is suspiciously little information available as to who (or WHAT) designed the original Boglin toy line--they have a remarkable amount of character for a kids' toy and it's possible their creation may have been a team effort--but whether the team was actually earth-bound or not remains a dark mystery.

At any rate, the first Boglins (and in case somehow you hadn't figured it out, the name is a take on the word "goblin") were wrinkly, lizard-like, two-limbed rubber beings with big bulging eyes and sardonic, knowing smiles.

"Dwork" was a standardized Boglin that came in different colors (green, blue, red and yellow) and had an eerily realistic and intelligent looking face.  Each Boglin came in a box designed to look like a wooden crate with plastic faux-metal bars (slightly bent, as if the Boglin were trying to escape and not far from succeeding...brrr!).

If you happened to walk through a Toys R Us before Christmas 1988 you might have been alarmed to see these hideous things leering at you, but it got even worse--or better, depending on your take on things...

There was a hole carved into the underside of the Boglin "crate," and the Boglin itself, and the box cover urged you to "Handle through bottom only."  If you were brave (or disturbed) enough to do this, if you stuck your hand up inside a Boglin body, it proved the statement on the box title quite true:  Boglins really were "outrageous creatures that come alive in your hands!"

3) Benchmark moments in our lives

I was in college when I discovered Boglins.  I was either bored or thinking about Christmas gifts for my nephews when I found myself wandering the aisles of the local toy store.  Being quite interested in special effects and creature make-up I was instantly taken with the sight of the obnoxious, green "thing" in the crate on the shelf in front of me, almost as if it "called" to me!  I followed the instructions, stuck my hand into the clammy, yucky, rubber body of the mold-colored, warty thing and...

My hand brushed a plastic mechanism inside the creature; this was the eye control and by tapping it gently it made the puppet's eerily realistic eyes shift!  The thing was...looking at me!

In seconds I figured out how to work the inner controls of the beast, although Boglins are definitely designed for smaller hands than an adult's.  With a little effort you could make the Boglin's eyes dart back and forth, raise and lower its eyelids, squish and pull its mouth into various realistic contortions and in general manipulate the thing's face in ways that were disturbingly "human."

Without another thought I raced to the counter, smuggling this sickening, elastic specimen under my arm as if I were doing something illegal or immoral, and got it home to my dorm room where I played with it for the next 2 hours, giggling like a mad scientist while thunder and lightning crashed outside my window.

4) More about the Boglins

On the back of the Boglin box was some scant, misleading information from an un-named, Pollyanna-like biologist.  The self-proclaimed "Bogologist" theorized that Boglins were the "missing link" to human personalities...though no mention of what the Boglins linked to is mentioned--human beings who had mated with things from a Louisiana swamp, perhaps?  While the location is never mentioned, and in fact could be extra-terrestrial, a picture on the back of the box shows Boglins lounging about in their "natural habitat," on logs, in the swamp and generally mucking about in some kind of fetid bog.

The Bogologist goes on to insist Boglins are affectionate and each have their own distinct personality.  One considers the same could be said of various demons and corporation magnates, too, of course.

Somewhere about halfway down the length of this diseased family tree a line branches limply off and ends with the vague proclamation, "Humans?"  I'm not sure what the implication is...either that our fearless Bogologist thinks we really are the offspring of these hell-spawned hollow-rubber mutations or that our fate was sealed the moment they arrived on the planet.

No matter, the Boglins were a lot of fun.  The bigger ones had those oddly realistic eyes, leering mouths and long, scorpion-like tails; the smaller ones had fixed eyes but great expressions and they all had floppy, thick arms.  Made out of a gooey, pliable but strong soft rubber they were disgusting enough to repel squeamish friends but interesting enough to keep most people entertained anyway.

Oh, and their eyes glowed in the dark! Many a night I woke up in my dorm room, saw my Boglin roommate staring at me from a nearby shelf with a soft green glow and felt compelled to turn the nasty thing the other way 'round so I couldn't see its face...or rather, it couldn't see MINE.

My Boglin was incredibly popular in my dorm hall.  All my friends eventually got brave enough to stick their hand up Dwork's...well...orifice...and manipulate its face.  If you worked at it you could really get some amazing animation out of the thing and I'd often sit and work expressions on it while my friends sat and watched in a state of silent hypnosis.

The fact that we were all inebriated probably had something to do with it, but that's beside the point.

"Dwork" was at least as, or maybe more, popular than I was and I was reminded of an 80s cult film called "Basket Case" about a young man who is born with a mutated "brother" attached to his side which is thusly amputated and carried around in a basket.  The sorry thing takes on a power over his more "normal" brother that makes the two inseparable, and homicidal.  Could this happen with my rubber companion, and me?

I'm afraid I may have terrorized my nephews to the point of being damaged for life but in time they warmed up to Dwork and even learned how to manipulate the puppet controls themselves.  I don't know that they ever completely fell under the sway of the ugly and unpleasant creature but certainly made their peace with it.

In time the Boglin became a well-accepted (or tolerated anyway) member of my household, at any rate, and even my cat felt unafraid of its presence.  Well, eventually anyway.

6) Where did the Boglins go?

The extinction of the "Boglin Peril" was probably treated by most with the same feelings as one has in the wake of a particularly bad case of the flu.

After I left college I stopped going to toy stores for any number of reasons so I don't know when Boglins disappeared from toy shelves, but it wasn't long after I first discovered them.

I kept my Boglin as a mascot on a shelf for a while when I first moved to LA but began to see the thing's presence as a sign of geek-dom I wasn't sure I wanted to display to any potential guests.

By this time the sticky "flesh" of the creature had collected a lot of dust and was now not just visibly gamey but literally so.  Some of the paint had worn away and it was turning a dull, nauseating gray color, as if it were molting into something even MORE terrible.  The eye mechanism broke (but I fixed it) and the eyelid mechanism popped out from the eyelids (but I could NOT fix it).  A hole appeared over one eyelid eventually and I was reminded of an earlier disappointment with a plasticine pal (see my article on "Stretch Armstrong).

In time I stuffed my Boglin into a plastic bag (and sealed it tight!) and tossed it into a box labeled "Old Things."  Every now and then I pull it out, stick my hand in it, spring it to life and "check in."

Boglins have continued to be mildly popular over the years, sell for modest prices on eBay and have even been revived a couple of times as new toys in smaller, cheaper versions (including--oh dear--a version that came encased in a small toilet filled with that disgusting 70s chemical-toy, "Slime!") but I've only ever known a couple people who actually owned one.

They were, and are still, one of the more unusual toys ever mass-produced by a major toy company that I know of and I still marvel at their detail, craftsmanship and simple, but effective life-like trickery.

In fact, a part of me often wonders if maybe I'm denying my Boglin a richer life in some other quarter and I worry sometimes that it actually might feel the same way...about me...! 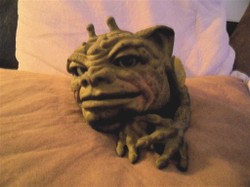