Grab some penicillin, and maybe some RAID! Horrible little rubber "things" from the late 80s have been released from their test tubes and are coming after you...introducing Germs!

In 1988 a line of toys was released by Worlds Of Wonder, the same company that brought Teddy Ruxpin to families everywhere, a phenomenon about which I will not speculate for the time being.

Ostensibly the germs were a "learning" toy, or perhaps, like the line of Nickolodeon chemical compound rejects, a "blecchy" toy. What they most certainly happened to be were *obscure* toys...there's very little information about them available. I've gleaned what info I can from friends and the Internet and have supplemented it with my own recollections...behold..the gooey, grotesque, googly-eyed germs!

I have covered the concept of the "rubber toy" at length in a companion article about the 70s classic "Stretch Armstrong" doll. Suffice to say, toys made of rubber have  been popular with kids as far back as the early 50s and are still in demand today.  There seems a sort of magic draw to small, wiggly things that children can paw and handle--a draw that is a combination of revulsion and fascination.  I suppose this does pave the way for these children to face a lot of things that they're going to have to deal with as grown-ups!

The Germs were 12 vinyl creatures sculpted as effigies of various diseases, though you are unlikely to find a "Winkyblinkyigoopiola", i.e. the germ that causes eyeball goo, in any medical journal.

Other disgusting specimens were the "Innyouttyitiis," a flaming red organism that was apparently responsible for belly button lint and the horn-nosed "Ahahchoosiosus," commonly known as the "sneeze."

Each germ was around 3 inches tall and had big, bulbous, crossed "cartoony" eyes.  The creatures were luridly colored in a way not often seen in the 80s...in fact, they looked very much like a toy Mattel might have produced in the "psychedelic 60s" (see my article on Kiddles for more info!)

Germs came with a "lab report," a small paper pamphlet that explained the details of each pestilence in a decidedly non-professional "street slang" way, and offered such useful information as, "You can sometimes coax the little creep out by leaving some garlic bubblegum near your sneakers overnight."

Each germ was housed in a test tube.  This might have been fine if you had a test tube holder to put them in but without one your only option was to turn the things over and display them upside down.  You could, of course, take your germ out of its test tube and "right" it so it would display right side up in its tube but those who did were assaulted with an unpleasant rubber scent that was hard to forget.  I read a vague story that the toys were considered dangerous but couldn't find out why.  I suppose a child might have tried to eat the creatures, though they are certainly ugly enough to have dissuaded, I would think, all but the most daring.

In fact, The Germs were designed in such a fleshy, anatomically suggestive way that they bordered on obscene; many were the times I had a dirty-minded friend over to examine them and speculate on what they were "really" modeled after.

3) Germs did not infect society

For whatever reason the Germ family never caught on.  I frequented toy stores at the time they were on the market in the late 80s and never saw them; I loved such things and would have surely grabbed them all had I known of their existence.

I didn't find out about them until the 90s when I saw them on a friends' desk at work.  I coveted them for a long time and eventually bought them from him when he had a moving sale.  Despite the things being the most popular items in my vintage toy case I never was quite as fascinated with them as I was with other things for reasons I can't explain (and don't probably matter).

Suffice to say, there's probably a "bar" for how popular disgusting toys can be--at the end of the day no one particularly wants to be reminded of things like ugly, gooey germs, even if they're brightly colored and have cute, funny faces.  They're still gross, no matter how you approach them!

I only knew one other person who had a set of germs--he had a complete set and was very catty in assuring me that my set was NOT complete.  It may have been about that time I started losing interest in the figures, as the man one-upping me was in his late 40s and I was in my 30s.  There had to be more to life, no?

As I mentioned the amount of information I found on the 'net for these lost artifacts of another yecchy age is woeful; aside from some fans and constant listings on eBay the Germs seem as elusive now as they were at the time.

Perhaps it's best that way; I sold my Germs on eBay not long ago for a pleasant sum to truly grateful buyers and find I don't miss them much at all.

Perhaps germs are "the gift that keeps on giving?"

If you have any information about these things or knowledge to share I'd be interested, let me know!

I have the set of twelve. Bought them in the 80's. I would like to sell.

Never heard of them too but they do seem very funny!

I think I would enjoy the germ toy.

Never knew these existed! Quite funny!! :) ~Hope you have a wonderful day~ 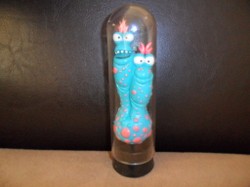