Before the Transformers...before Star Wars! Behold the Micronauts, Japanese import robot toys that invaded America in the 70s and almost took it over!

Effigies of iconic figures date back as far as man has been around (and that's a mighty long time!). Toy effigies for children have been around almost as long. Such representations, called dolls or "action figures," are considered important articles in the growth and development of children; they "inform" children about the world around them and also let parents know what interests a child is developing.

Science fiction toys are interesting because, being based on speculative fiction, they have no direct link to a child's present; they are "what if?" toys in the extreme. Unlike a doll based on a popular figure or a realistic model of how life is, such dolls present questions: if the doll is popular, what is this saying about both the children who love it and the people who created it?

How does one explain the popularity of dolls that represent a non-human future, one that seems increasingly likely in our modern society? Perhaps there's a clue in the phenomenon of the "Micronaut" toy line I'll explore a bit below.

1) Micronauts Are Made, Not Born

In 1974 Japan's "Takara" company introduced a line of toys labeled "Microman."  Eventually the line was bought out by the Mego Company in the US and the toys were re-named "Micronauts" and released in the States in 1976.  The change in name made clear that most of these tiny plastic robot "men" were explorers ("naut" meaning "sailor") by trade and toiling in the outer regions of some unknown system in "outer space"; they were more than simply "small, synthetic people" as the original name implied.

2) Who Were The Micronauts?

There's very little information as to the original "back story" of the Micronauts, and what news there is on the web is largely in Japanese as there still appears to be a steady cult for the toys in Japan.

A child of the 70s who either saw a Micronaut package in a store or received one as a gift was left to decide what he or she thought Micronauts "were," and what they did, and with which, and to whom.

The original line of Micronaut figures were small (under 4 inches/10 cm) figures of "men" (well, they LOOKED liked they were men to us as kids, who knows nowadays?) made of a clear-plastic pseudo-metal-type material.  They had reflective silver heads and plastic gloves and shoes.  There were four original Micronaut Men with body colors tinted clear, blue, red and yellow, each bearing a unique chest plate. The figures had a unique quality in that you could pull off their dainty hands, feet, head and chest plates and put them on again, or put them on one of their other limbs, or other toys.  Eventually the line became associated with a sort of "free for all" mentality where one could mix and match arms, legs and rocket-ship parts at will, creating hybrid man-machines that preceded the Tranformers by several years.

There seemed to be no malevolent forces at work in  Micronaut World, which was apparently the perfect attainment of a completely autonomous, self-perpetuating universe without race, sex or even, it seemed language.  Often, as kids are wont to do, certain toys were deemed villainous simply by being bigger or more menacing in appearance, but for the most part it seemed Micronaut World was a cold, sterile universe of industry and economics; there does not appear to have been even a hint of "culture" in this world--picture one of the Micronauts in drag playing Shakespeare's "Juliet" and you get my meaning!

In fact, "Micronaut World" looks something like the universe depicted at the end of Steven Spielberg's 2001 film, "AI: Artificial Intelligence" (see the film then let me know if you agree!).

4) WHY Were The Micronauts?

Micronauts seem to have stemmed from the same fountain of imagination in Japan that would eventually produce the Shogun Warriors (another line of toys in the 70s) and Power Rangers--there's a long history of obsession with  "mecha" in Japanese culture (other cultures too of course, but you don't see wildly popular lines of toys springing forth from all of them).

As for their purpose, again, Micronauts seemed to exist solely to toil at their business--there were Micronaut vehicles, accessories, additions and variations, a much-coveted space station and "Strata Station" that you could move a battery-operated vehicle around, a helicopter and eventually a line of "mutant" micros that could be mixed n' matched to give your old robots a face (or arm) lift.  Why this vision of the world was popular for children in the 70s remains a mystery, there seems to have been no precedent for it other than, "kids like robots!"

The toys ran through 5 series in as many years and, for a short time, coinciding with the release and success of the original "Star Wars" film and the mania that accompanied it in 1977 and beyond, were wildly popular.

As well as they did, the toys mysteriously disappeared in 1980.  Some cite small parts that were considered dangerous, that could choke a child that ate them.  Some parts that had "spring action" were thought dangerous too.  There were certainly many small parts and details, that was half the fun, and the toys were not meant for smaller children (it said so on the box)--it may also have been that the fad just died.

At any rate, to this day there are "Micronaut" leagues of fans who still remember these unique toys, and the name has been revived a number of times over the years in comic book and even toy form.  While they Micronaut invasion has never completely taken over the world, it's clear the toys invaded the hearts of those that remember them. 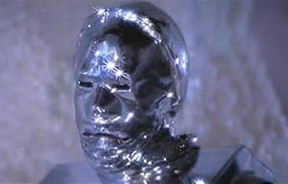 I remember coming across my first Micro when I was a little kid and being blown away.  For my money, the things resembled "Box," a beguiling, memorable character in the classic old sci-fi film "Logan's Run" from around the same time.

My friend had a Micronaut first and there was a bit of a competition between us for a short time, as to who had the "cooler" Micros.  I don't remember what the toys cost but they were considered expensive for their day--probably over a dollar at least!  Even now that would seem like a lot to pay for how tiny and uneventful they were.  They were similar to the first line of Star Wars dolls that appeared--small and cheap--but still compelling.  The "crystal" look of their plastic bodies was aesthetically pleasing and weird.  The associated vehicles and accoutrements were similarly attractive and the "space stations" were a kind of Micronaut "Valhalla" for a kid, as they were outrageously expensive but very interesting.  The problem was you wanted a whole MESS of Micronaut parts and toys and it was cost-prohibitive to get there; like Legos today, you didn't want just one play set, you wanted a whole BOX of stuff to create with.

My brother eventually became a bit of a Micronaut collector--he was younger than me (but never choked on any of the parts) and I was getting too old for "toys."  However, I made great use of the various pieces of his space station to create "authentic" props for all the backyard Star Wars Super-8 films I made.

The Micronaut dolls themselves proved fallible after all; they had elastic inside and once it frayed with age the dolls fell apart and were hard to repair--the modern petro-technology revolution was a bust.  The last time I saw a Micronaut--whether my brother's or mine I couldn't say--it was crumpled in a tiny ball, missing and arm and without shoes, hands or a head, in the toy graveyard in the basement of my parents' house when they moved out.  It made me take pause and think that there have been "robot revolutions" throughout history and may yet be one.  Animatronics have come a long way since "Pirates Of The Caribbean" and plastic pals are no longer just a fantasy; they're becoming an every day "inevitability."  Certainly the incredible success of the "Transformers" films proves there is a market ripe for artificial intelligence as a separate entity from the human race, whether working with us peacefully or not.

But WILL robots take over the world one day?  The Micronaut Mission obviously failed, but let's face it...robots can wait a long, long time...maybe it was just the beginning of a bigger and more elaborate plan!  The world will just have to wait, and see...

All kids love to play with toys.Because of being a soft plush toy, kids can throw this Angry Birds Plush Pig at each other without danger of anyone getting hurt.and serves as a good companion to your child.
http://liztoys.com This fantastic plush toy is simply adored by anyone who is an Angry Birds fan.

Yeah! Robots are cool! :) Thank you for commenting!

Love the micronauts, remind me of the robot movies which I fell in love with.

Here are three companions that may--or may not--have been related to the popu... 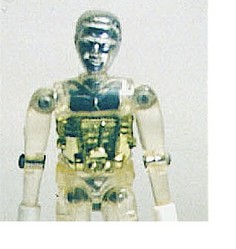 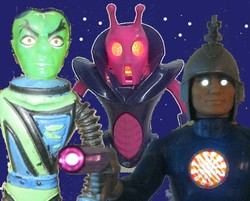