Long before "Beanie Babies" conquered the world there were the adorable, squeezable, jammie-clad tykes known as the "Baby Beans"

Mattel was a powerful force in the toy market of the 1960s and 70s and continues to be successful to this day. While Hasbro and Kenner toys could be counted on for engaging games and action, Mattel more or less had the "doll" market cornered and the best their competitors could do was try to catch up.

One of their popular, and intriguing, lines was a bouncy bounty of bean-filled babies known as the "Baby Beans" dolls. These 12" dolls were cuddly, cute and charismatic, their charms were simple: they were like a favorite pillow and "blankie" in one.

How they came into existence circa 1970 and why they left remains a mystery, however, while they reigned this sleepwear-uniformed army of infants ruled the toy market.

These dolls are instantly recognizable for two qualities:  their floppy, bean-stuffed, pajama-clad bodies and their agreeable, giggling, elfin faces.

Their bodies were simple enough:  Stitched from what felt like a cross between terry cloth and velvet, the Beanies were usually dressed in a one-piece, solid colored baby sleeper with a hoodie.  The jumper had pom-pom puffs on the front and often the hoodie was adorned with a pom-pom or lace as well.  The "beans" inside were actually a mass of tiny styrofoam ping-pong-shaped balls that were a nightmare to clean up if your Baby Beans happened to get a hole in its pajamas and start "leaking."

The hands were made of soft vinyl as were the heads; they had painted-on eyes and each had a small tuft of hair sticking out the front of its cap.  The original line had one "Beanie mold" for the faces; the countenance was a twinkle-eyed little girl's and named "Booful" (well, hey, that's more original than "Brittany," right?) and the only variation was the color of Booful's jumper--the standard yellow and the variant red, pink or perhaps polka-dotted.

Being full of "beans," the doll could be squished into place to sit or flopped comfortably across a chair and the dolls had a wonderful, tactile squeezability factor that was well-nigh irresistible.  And so the Baby Beans revolution was begun!

After the initial model of "Booful" was released variations were introduced...some versions of Booful had cloth stubs for hands instead of the detailed vinyl and one somewhat rude version had the ability to moon her owner with a removable back-flap to her jammies, this was "Bare Bottom Booful Beans."

A brother, the non-alliterative named "Punky", soon joined Booful.  He had dark eyes and hair and blue pajamas but was otherwise Booful's twin.

"Bitty" Beans was the first real variation on Booful.  Although she was technically supposed to be Booful and Punky's sister she didn’t look anything like them, being more cartoon-stylized than realistic.  She was dressed in a bright pink jumper and had lace frills around her bonnet.

She was joined by an African American version (same face, just darker pigment) and had her OWN brother, "Biffy," who was dressed something like a miniature train conductor in navy overalls and cap.

From here the "Beans" family spread almost unto infestation levels:  there was the perpetually tired-faced "Bedsie" beans, the 70's-attired "Jeans Beans," a Beanie that cried and one that talked.  There were "storybook" Beanies in the guise of beloved children's story characters like Little Red Riding Hood, and puppet versions of the Beanies where you could stick your hand up the back of their shirt and make them wiggle around.  Along with these new versions came tie ins like story books and paper dolls.  The "Beans Revolution" was underway!

As Baby Beans seemed set to invade and over-run the planet, the last, and weirdest, variations appeared:  Babies that could procreate!  There was "Mama Beans and Baby," a demure, respectful looking toddler holding her 2" spawn, "Daddy Beans and Baby" (a baby with a moustache!) and Mama Beans...with twins!

Things seemed to finally be "contained" as it were with the arrival of the "Canned Beans," the original variants on the model but stuffed into a can-shaped package and labeled "Pork-n-Beans," "Green" and "Navy" beans.  Each one came with a cloying "recipe" on the back suggesting one add to your doll lots of hugs, kisses and love.

The last variations on the Beans were the "Shoebox" beans dolls in 1978.  The dolls were tiny (2-3 inch) versions of their fore-sisters and forefathers and encased in little shoeboxes.

Around the end of the 1970s the "Baby Beans" and their relations seemed to completely disappear from toy shelves and catalogs with little fanfare, and thus, the Beanie revolution came to a quiet close!

6) What have we learned?

As with any toy line, children grow up and abandon their playthings and new generations appear with their own unique toys, games and interests.  Some toys never seem to fall out of favor (last I saw "Candyland" was still hanging on) and some return in different forms.  The Beanies had a great run and don't look nearly as dated, in retrospect, as a lot of toys from the era.  The appeal of the toys was simple and, like most Mattel product they were high quality and loaded with character.  Just about every child I knew in the early 70s had one of these floppy, squishy things.  They were inexpensive, durable and unobtrusive.  I had one of the "puppet" boys and it retained its comforting "fluffy towel" scent for years after it outlived its playability, becoming scuffed, dirty and losing its stuffing.

Today "Baby Beans" sell modestly well on eBay and if they're not remembered by anyone outside of those around the age of the "Baby Boomer" generation their influence can be felt in similar toys that appear from time to time, including the mega-successful, seemingly endless line of "Beanie Babies" that manufacturing company Ty continues to cash in on even today.

But for all intents and purposes, the bean-filled toy revolution that continues in different forms to this day began with Mattel's humble, giggle-faced little doll in yellow pajamas over 40 years ago; long may the Baby Beans reign in toy history!

Ha ha, yeah, funny how memory works, huh! Somewhere there's an "Island Of Lost Toys," I'm sure of it! :)

Wow, I had forgotten all about these! I actually bought the pink version for my niece many, many years ago. And you are so right, they were that perfect cross between a doll and a fuzzy blanket. She carried it everywhere! 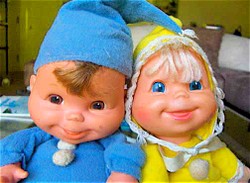