The late 1960s were a remarkable time of changing ideals and technologies. One of the more memorable events that came out of this time period was, of course, the first moonwalk. But BEFORE man walked on the moon, people imagined men CAME from the moon, and elsewhere.

In 1967 a toy designer named Mel Birnkrant was hired by the famous and popular Colorforms Company to develop a line of toys to compliment (and cash in on) another popular toy line, the "Matt Mason" astronauts.

The original plan was to create a force of "men" representing each of the planets in our system, and eventually planets NOT in our system. While the toys themselves never truly caught on for a variety of reasons (one being that, a year after they came out, we actually made it to the moon and realized no bug-eyed monsters lived there), these wildly inventive and beguiling creations still captivate today and the figures, and the story behind them, have spawned cult groups of collectors, web sites and conventions.

1) First there was "Matt Mason"

Matt and his rugged buddies were "dolls for boys;" small cousins of the popular G. I. Joe line.  The Matt Mason team was composed of 6' tall, strong-jawed  "All American" male spacemen "bendies," i.e., rubber figures with wire skeletons designed to be bent into "action poses."  They had accordion joints based on early space-suit photographs released by Nasa.

Matt and his macho pals were based in a world of "speculative" fiction; their "Tom Swift"-ian world was considered a possible one.  They came with crafts made to navigate and possibly mine the moon but you could upgrade to bigger and better vehicles and the "Valhalla" of the Mason line was a large, "working" space station (it lit up if you inserted batteries).  The goal, aside from separating parents from their cash at Christmas, was to create a toy a boy could be proud to play with, explore with and learn from that was also a "doll" (or, rather, an action figure).  They were affordable and "dignified" and sold like hot cakes.

2) Then there was the "Colorforms Play Set"

Any child of the 60s, 70s or even 80s probably remembers colorforms. These were 12" flat play sets with popular cartoon characters on them.  They had plastic semi-adhesive pieces you could place, and re-place, on a background to create amusing images to your heart's content.  Colorforms had been going a long time by the 60s; sets had appeared as early as the 1940s with a "Popeye" dress-up kit and reached a peak in the early 70s.  After Matt and his buddies conquered the earth (and perhaps even the moon) in the mid-to-late 60s, the committees at Colorforms decided to try to cash in by entering the doll market and creating their own "Matt Mason" spin-off.

Enter the humble and amazingly talented Mel Birnkrant, a toy designer who was just beginning to make a name for himself.

3) And the "Spacemen" are born

It seems the Colorforms Company gave Mr. Birnkrant free reign to let his imagination run wild and so he did. Pulling inspiration from the animated creatures in Ray Harryhausen movies, Twilight Zone episodes and schlocky 50's "atomic monster" films and the respective images in "Famous Monsters Magazine,"  Birnkrant's first line of "men" was only exceeded in creativity by the aborted second line.

The idea was that each "man" represented a planet and the troop, together, were considered benevolent, science-loving friends to their space-suited pals, the "Masons"; they even  had the same accordian-jointed suits.

There were seven "men" in the original line:  Diminutive, green, antennaed Martian "Alpha 7," "Astro-Nautilus", the purple octopus man from Neptune, "Commander Comet," the angelic winged hero from Venus, "Colossus Rex," the stern, lizard-like warrior from Jupiter, the wise, gray-faced "Electron+" from Pluto, Orbitron, who looked like he'd escaped from the set of "This Island Earth" but was actually from Uranus and fiery-faced "Zodiac" from Saturn.

Each figure came enclosed in bubble plastic on a card, had his own tool or weapon and sold for about $2.  The card showed gorgeous photographs of the "men" going about their business and gave a brief description of who the men were and what talents and skills they had

The original line was popular--boys picked up on the inventive, appealing Birnkrant designs, the toys were affordable and fit well with the Matt Mason gang.

All was going well and another line of "men" was developed, this one more spectacular than the last.

For a variety of reasons, most probably involving money, the second line of "men" was shut down just as the toys were being prepared for mass production.  To the best of my knowledge only two complete sets exist anywhere in the world and are wildly sought out by collectors.  I've seen "carded" originals of some of these figures and they're stunning.

It may have been that they were too costly to produce, perhaps things changed after we landed on the moon and "2001: A Space Odyssey" arrived, signaling the end of the "bug-eyed monster" image most people had of outer space.

For whatever reason, The Outer Space Men quickly disappeared into the ether and were not heard from again for a long time.

Like many boys raised in the 70s I was fascinated with the whole "Star Wars" phenomenon.  I didn't collect any of the tie-in toys but had friends who did.  My younger brother had to get his tonsils out and got a gift from my parents, intended to cheer him up. It was a big (17" square) Colorforms play set with the Star-Wars-influenced title "Space Warriors" on the front.  The picture on the cover showed nine colorful, 1960s-looking toy spaceman figures and it was quite a disappointment to open the box and find only the usual thin-plastic play pieces of a typical Colorforms playset inside.

My imagination was sparked...I had a vague recollection of having maybe seen these "Space Warriors" at some point when I was little...had they really existed as toys once?  If so, I determined they must have been the *coolest* toys that ever existed!

Many years later I got into toy collecting a little and started perusing consignment shops that had cropped up to cash in on Baby Boomers' sentiments...and wallets.  In one such shop in Los Angeles I found an old, rotting, peculiar little rubber figure that was on offer for an exorbitant price.  Seeing this artifact sparked further memories...was this one of the "Space Warriors" I'd seen on the box of the Colorforms play set my brother had gotten in the 70s?

Eventually I would go on a long and wild chase to track down the "Space Warriors," aka, "Outer Space Men" and learn their story.  The Internet and eBay had just become more widely accessible and I found I wasn't alone; lots of people were collecting these wonderful toys and trying to figure out what they were all about.

6) The "Outer Space Men" are a success

It didn't take much delving to see these figures were cconsidered rare and valuable.  Some of the "men" were more rare than others and went for upwards of $500 for a figure that wasn't even complete.  Finding one that was clean, not damaged and had no broken inner wires made it even more valuable.

Most valuable of all were the figures that had their accessories intact; it seemed that the rubber these toys were made from had a mysterious, un-predictable quality; over time...they melted plastic!  If you happened to keep your space man's plastic helmet or staff connected to the figure (and this was true of Matt Mason and his friends as well) you might open the "old toy box" 30 years later to find the plastic  parts of your vintage toy had melted and perhaps even fused to the rubber of the figure, rendering it worthless.

Naturally this just made collecting these figures more of a challenge and more satisfying when you tracked one down that was "mint."

There were other toys in the line as well; aside from the 1977 Colorforms play set featuring the OSM cast on the cover, there was a line of puzzles and even some promotional artwork released and their popularity continues to this day.

I spent the late 90s (and a considerable amount of my then-disposable income) tracking down and acquiring my own complete set of Outer Space Men.  I also found someone who made reproductions of the accessories to replace the damaged original ones.

I was so besotted with these strange things I ended up contacting a special effects house to help me figure out how to restore the original shiny-paint look to my figures without destroying them (I ended up using a "non-corrosive polymer fixative spray" if you really want to know).

Thankfully, though the Outer Space Men didn't quite catch on enough to make Birnkrant and his inventions a household name (or a lot of money) they were enough to secure him as a toy designer for an entire career and he still works today.  In fact, there's been renewed interest in Birnkrant and his space men, including new versions of the original toys, comic books, related toys and a greater appreciation for the ones already in existence.

Today there are several websites featuring news and information about what the Outer Space Men were and continue to be and there was even a fan-book written about the subject.

Mel Birnkrant continues to draw and design with his unique style and seems to be enjoying the recent resurgence of interest in his great toys (he was also behind the success of the Galoob line of charismatic "Baby Face" dolls in the 80s).  Either he or his work makes regular appearances at sci-fi and toy conventions like the epic annual "Comic-Con" in San Diego.

The full story of the "Outer Space Men" is a mixture of heartbreak and triumph of the spirit and worth checking out if you have any interest in dolls, the toy-making business or even recent pop-history.  I've included links for further exploration below.

Meanwhile, I think I'll go grab my "Commander Comet" figure, pretend I'm on Venus and sail him around my room one more time...thanks to Mel, and Colorforms!

Mel Birnkrant's website with tons of pictures and info

The definitive site for all things "Outer Space Men"

Thanks! They're definitely "different" huh! :)

Very cool vintage treasures for sure. 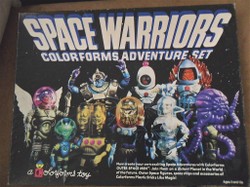 To make your own paper dolls or buy ready ones has always been a passion of mine. Now I am teaching my grand daughter to do the same.
73%  0   11 DerdriuMarriner
Vintage Dolls