Take your favorite dessert, a cupcake of course, and combine it with your favorite holiday and what do you get? A Christmas cupcake!
Although the modern age has dramatically decreased our use of traditional "snail" mail, Christmas is one time that we stick with the old ways. Nothing can compare with a physical Christmas card, mailed in an envelope and stamped with holiday postage.

Christmas Cards with a Cupcake Theme

Look at these cupcake Christmas cards! They look delicious enough to eat. Don't you want to take a nibble and lick off a big scoop of the luscious frosting?

When your friends get a cupcake Christmas card, they are taken back to their childhood when cupcakes were the standard fare of birthday parties and special holiday celebrations.

Christmas is the celebration of Jesus' birthday. Instead of a big cake, I'm sure He'd love cupcakes.

Christmas Cards with Photos of Cupcakes

Postage for Your Christmas Cards

Make Your Mail Stand Out With Unique Stamps

I love Christmas stamps, but let's be honest, the post office only has so many different styles. If you want your Christmas cards to stand out among the rest in the mail box, choose stamps from Zazzle. There are hundreds of individualized options for Christmas postage.

Each design comes in your choice of value: 29¢ postcard, 44¢ first class mail, and so on. You can even choose stamps in three sizes:

Zazzle also offers discounts when you buy more than one sheet of stamps. And those sheets don't even have to be the same style.

A Disaster That Turned Into Inspiration

By Sprite and Jimmie

Kitty was not allowed in the kitchen, but she wanted to see the Christmas cupcakes, so she was spying on them from the living room. She saw cupcakes with Christmas trees of frosting, cupcakes with green frostings wreaths, and. cupcakes with red and white peppermint swirls. She saw Grandma and Grandpa eat a few of the cupcakes that didn't turn out perfect.

Kitty really wanted to try her first cupcake, so she waited patiently for the right opportunity.

It was Saturday, so she knew the whole family would be at a family Christmas party that night. When they were all gone, she tiptoed into the kitchen, pounced up to the countertop, and looked at all the different cupcakes. She chose to try the one with the red and white peppermint swirl.

Kitty was thinking about exactly how to eat the cupcake. Finally she decided to stick her nose into the cupcake icing and lick it off. Just then, the dog barked. Kitty was terrified, and in her escape, ran across the entire batch of cupcakes, leaving a trail of pawprints and kitten hair in the frosting.

Kitty knew that she was in big trouble because her pawprints were far smaller than the dog's. There was no way to avoid the blame for destroying the beautiful Christmas cupcakes.

Once Kitty got safety, she saw that her paws were stained with red, white, and green frosting. Behind her was a trail of globs of frosting all along the white carpet. Instead of trailing the mess any farther, Kitty sat down, exhausted, resigned to her punishment.

Kitty heard the car pull into the driveway, but she remained firm in her resolve to accept what came her way as a result of her bad behavior.

The first ones in were Grandma and Grandpa. They walked in through the kitchen door and saw the ruined cupcakes. "Oh no!" they cried in dismay.

Mom and Dad came in through the front door and saw the trail of frosting globs along the white carpet. They were furious at Kitty and sent her outdoors until after Christmas was over.

But Judy begged for the pardon of Kitty, saying, "But Christmas should be a time of love and forgiveness. Let Kitty stay inside and celebrate with us. You can't blame her for wanting to taste those amazing cupcakes."

Bo suddenly lit up with an idea, "Didn't you say that we needed a creative idea for our Christmas cards this year?"

Mom answered, "Yes, but this is not the time for talking about Christmas cards. Look at this mess!"

"Wait, Mom," Bo said, "where is the camera? Judy, bring Kitty into the kitchen"

The adults peered around the kitchen door to see Bo staging the accident so he could capture it in a photograph. The scene was pretty ridiculous, and soon the entire was in tears because they were laughing so hard.

The photos turned out so well that Mom used one for the family Christmas cards. Kitty's frosting stained nose and paws alongside the mangled Christmas cupcakes made for a one of a kind Christmas card that no one else had ever seen.

In the Christmas Spirit?

Christmas Centerpieces that Children Can Make
Let the children decorate for Christmas with these crafty centerpiece ideas that are easy and inexpensive. Make it a family tradition to create rather than buy your centerpiece.

Happy Birthday Jesus Ornaments
Decorate your Christmas tree with ornaments that tell the real reason for the holy day -- the birth of the Savior, Jesus Christ.

A Cupcake Christmas Tree
Make a sweet Christmas with a cupcake themed tree this year. Cupcake ornaments are pretty and make appropriate gifts for the sweeties in your life.

Peppermint Christmas Ornaments
Decorate your Christmas tree in traditional red and white with peppermint themed ornaments.
Updated: 02/27/2012, Jimmie
Thank you! Would you like to post a comment now?
9

I love your story! Bad kitty! 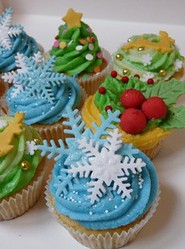