Pork Goulash with Noodles is a popular variation of this hearty comfort food favorite in the Czech Republic.

While goulash (guláš) may have originated in the medieval Kingdom of Hungary, it is integral to the culinary history of the Czech Republic and has the comfortable feel and appeal of a traditional Czech dish.

Interesting effects are achieved in Czech goulashes by the addition of:
• beer, especially the pale lager known as Pilsner, named for its place of origin, the city of Plzeň (Pilsen) in western Bohemia;
• grated horseradish (křen strouhaný) as garnish.

Pork goulash with noodles (vepřový guláš, těstoviny) is a popular Czech variation of this hearty stew.

This goulash is easy to prepare and supremely satisfying to consume.

1. In a large skillet or pot, heat lard (or oil) over medium-to-high heat.

2. Pour in water, and add caraway and paprika.

3. Reduce heat to medium, cover with lid, and allow to simmer for 1.5 to 2 hours. Sauce will thicken somewhat.

4. Before removing from burner, sprinkle with marjoram and stir to blend.

5. Remove from burner and serve hot.

Coffee pudding (Kávový pudink) is a popular dessert in the Czech Republic. Ea... 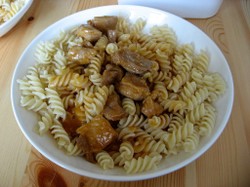