An intimate, small-scale drama about two ordinary married people who fall in love. Wonderful acting and cinematography. No specific spoilers.

You may recognize David Lean’s name from famous movies such as Lawrence of Arabia (1962), Doctor Zhivago (1965), and A Passage to India (1984), as well as Great Expectations (1946) and Oliver Twist (1948). You are also probably familiar with Noël Coward, one of the most famous English playwrights of the 20th century.

Brief Encounter (1945) is based on a one-act, half-hour play of 1936 by Noël Coward, titled Still Life. It’s a story about love and convention in 1938 suburban London, filmed at a time when, post-WWII, women’s participation in the war effort was leading to a change in how women were seen and how they saw themselves. As a result, social mores were beginning to change. In fact, at a showing of the Brief Encounter in one suburban British cinema in 1945, one woman in the front row laughed at the restraint the lovers were showing, and other women further back in the cinema hall echoed her laugh. The producers worried that maybe the tone of Brief Encounter was outdated, already a thing of the past.

In fact, there’s such delicacy in the acting of the two protagonists that this movie will never get outdated. Celia Johnson’s facial expressions, redolent of silent movies (an observation that she herself made at the time the movie was shot), and the whole cinematic vocabulary of suppressed passion and doomed love turn Brief Encounter into a classic.

I won’t spoil the details of the story for you. I’ll just say that it’s about a romance between a married housewife (Laura Jesson, played by Celia Johnson) and a married doctor (Alec Harvey, played by Trevor Howard) that grows out of “brief encounters” at a railway station and in the countryside.

In terms of film technique, the direction and choice of symbols here are truly wonderful, even as they are rather clichéd by now in cinema: steam trains puffing out of the train station and intense, dramatic music (Rachmaninoff’s Piano Concerto No. 2) for sexual passion; the lying other seen in a mirror; Laura’s interest in Rachmaninoff, which suggests she was more than a colorless, sedate housewife; the text frames in the films they see at the cinema, reading “Flames of Passion” in blaring letters; the lightning that brings out, subtly or forcefully, Laura’s emotions; the lackluster backdrop of a railway station that fits the story of repressed emotion; the stir around the counter in the refreshment area (manned by Myrtle Bagot as Joyce Carey), where, in the manner of literature and films on social class manners there’s a foil to the main romance; dark, rainy streets that echo the mood of the story . . . all this makes for memorable cinema.

The commentary track allows you, for instance, see the movie again under the guidance of a film expert. It's a fabulous ride, teaching you so much about moviemaking with reference to specific scenes -- much better than reading about all that in a book.

From what I'm reading online on the Criterion Collection Web site, I gather all their releases except for their Essential Art House selection and the Eclipse box sets, which are movie-only, offer an audio commentary and possibly other extra features as well.

The film wasn’t especially successful when it was released. Director David Lean attributed this to not having used star actors. David Lean and the producers, however, couldn’t have been more happy with Celia Johnson and Alec Harvey. While not particularly beautiful, Celia Johnson, 37 at the time, is terribly expressive. Indeed, I will watch the movie again only to see her act. (Then again to pay increased attention to the lighting, which I have really enjoyed.) Trevor Howard, as Dr. Alec Harvey, 32 at the time, was not very known at all, having only one credited movie role to his name. He’s not especially handsome either, but performs his part beautifully. I believe the film was so much more powerful for David Lean’s choice of these two actors. Star charisma would have added glamour that I think would have ruined the movie, which is an intimate, realistic drama about two ordinary people.

What I notice, thinking some more of the movie, is that, while the woman is certainly fighting emotional turmoil, the man, Dr. Alec Harvey, is no less tormented. There is no male/female divide here, no gender roles turning the man into a person led by reason and the woman into a creature led by emotion. True, there is also Laura’s husband, Fred, an outwardly staid guy who enjoys his crossword puzzle and dismisses his wife’s feelings. But Fred is not an emotionless git – on the contrary. Which is why Laura talks to him in her head, feeling he would understand her best. And, judging by the ending, he probably does understand her a little bit.

But back to emotion and reason, I feel they are equally important in both Laura’s and Alec’s lives, drawing them together and pulling them apart, and affecting their romance in a way that moves the affair beyond the plane of middle-class values and expectations to that of a poignant and important struggle between these two driving forces of our actions. Speaking of poignant, there’s so much power in their parting scene, in that last gesture between them.

Also powerfully affecting the reception of this film is, I think, the way Laura expresses herself in the voice-over. She says things like “so utterly humiliated and defeated, and so dreadfully, dreadfully ashamed," which is middle-class British English way to cope with feelings outside the bounds of decorum. It makes for quite an experience!

Do watch this movie! It’s a gem.

I wish there was a way to borrow more films from the Criterion Collection. This one I found at the British Council Library.

Mira, Nice review! It's always a good bet to go through the Criterion Collection, where one of my all-time favorite films is Peter Weir's "The Last Wave" with Richard Chamberlain.
P.S. Good use of the word "git," one of those great slang words that Brits use to perfection and that don't get used near enough on this side of the pond.

Well, the video was fun, I have to say :), but somehow it only made me want to watch the movie again! :)

A real classic! You're right, it shows that a captivating story doesn't have to be flashy or large scale. However, I must admit, I struggle to watch it with a straight face after it was parodied by a British comedian called Victoria Wood. I believe the sketch can be found on YouTube, here: http://www.youtube.com/watch?v=ajC4Az...

Yes, the more I think about it, the more I like it. It's amazing what a director, several actors, and a small film crew a film crew can make with a minimal story. 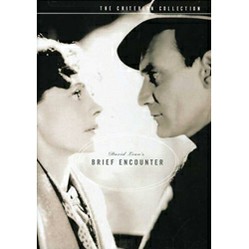