Dealing With Dogs When Running and Cycling

I've seen the leg wounds of people who have gotten stitches after a dog bite. Those barking dogs? Yes, they do want to eat you. Here's how to avoid being bit.

There was this excellent, long country road that we used to train on. Near the top of the hill, when you were most exhausted from the long climb, there was a house with two aggressive dogs.

Typically, you could ride quietly past unnoticed, but more than once I found myself finding a surprising amount of reserve energy as I sprinted away for my life.

Other riders were not always as informed or as lucky. In my time riding, I met two riders who had been bitten, and one of those had to get stitches for the wounds.

Here's how to confront those menancing dogs.

It's not the dog's fault that its about to hurt you.  These dogs should be kept in safe quarters where they can't hurt you or be hurt by you -- and its their owner's fault for not taking better care of them.

However, when its your life on the line, you need to take some defensive measures to keep yourself safe.

So when using these measures, remember to maintain a healthy respect for your confused opponent.  After all, he is likely someone else's best friend.

When Fido Doesn't Want To Play

This is the foundation of dealing with dogs.  Stand straight. Talk deep and controlled and forcefully.  I typically shout “go home” as deeply as I can.  It stops the dogs and makes them realize “This thing talks”.

And sure, the dog doesn’t know English, but it does understand the tone.  Also, the phrase “Go Home” allows you more control than trying to shout an emotionally-charged word like “NO”.  The last thing you want to do is scream or act terrified.

Often, a verbal command is all that it takes.

Whatever you do, never bend down before a dog. Bending or kneeling before a dog can make you appear subservient and vulnerable, and may incite an aggressive dog to attack.

This may sound cliche, but if you can rapidly outdistance the dog, or get outside of its territory, than you may stand a better chance of being able to avoid a confrontation with a menancing or territorial dog.

Of course, this is much harder to do if you are on foot. I find that I try to steer to the far side of the road.  In most cases dogs won’t aggressively come after you if there is some distance.

But, there are no guarantees when it comes to dogs you don’t know.

Pepper spray is my #1 favorite weapon to carry for dogs.  However, as much as I’ve carried it, I’ve never once used it.  There are a few reasons for this:

I normally carry pepper spray when running, not when riding.  Dogs tend to attack bikes more than joggers because, well, dogs tend to chase bikes more than runners and I’m not sure why.   Most of my confrontations with the furry un-friend has been when cycling.

Pepper spray can carry with the wind and come back and hit you (That would suck. Majorly.)  I’ve pulled it out before while jogging, but because of the way wind can carry it, I’ve always waited until the last minute to hit the trigger -- and that moment never came.

And, Finally, Pepper spray does not spray as far as we would like to think.  Even the brands of pepper spray that they sell specifically for joggers is not really effective more than about 5 feet away. And most dogs will stay back when they see that you’ve stopped and have taken an authoritative and defensive position

They are everywhere.  I especially like them when running since they are so easy to get.

However, it’s important to not bow before a dog.  If you are in a standoff with a dog and you bend over to get a rock, the dog will interpret the body language as being submissive and will likely attack.

Unless you are a professional baseball pitcher, it’s unlikely that you could actually use the rock as a defensive weapon.  However, by skipping them along the ground at the dog, you can often create enough noise and disturbance that the dog will leave.

I often combine it with a deep “go home” command.  More stubborn dogs can sometimes be dissuaded to leave by chucking handfuls of gravel at them.

I have used the water bottle with limited effectiveness when dogs are coming right up next the bike. I just squirt it in their face.  Its simple, but it tends to startle them.

Unfortunately this requires you to both take your attention from the road and take one hand off of the handlebar. Because of that, I’ve switched more to the method below.

Read more about choosing your next water bottle!

The Top 3 Best Cycling Water Bottles
Choose the right bike bottle!Besides your helmet, this is the most important part of your bicycle. Preventing heat stroke and getting enough fluid should be your biggest concern.

When bike riding, I’ve switched to kicking as my primary weapon.  This allows me to keep both hands on the handlebar.  The last thing I want to do is wreck while defending against a dog.

The key here is that I try to sprint away before the dog is close enough to attack. In order to unclip my pedal and kick, I have to realize that the dog is too close.

And then, remember to retract your leg after each kick.  You don’t want the dog getting a mouthful of your ankle.

Above all, don’t forget the verbal command to “Go Home”.  Kicking isn’t that great in and of itself.  But its really effective when combined with the command.

Remember the dogs on the hill I mentioned earlier?  I have used that method against them twice, now.

When the Dog is In Front

Sometimes you find yourself in that odd situation where the dog is ahead of you on the road. These situations require special care.  If the dog gets in front of you it can catch your wheel and flip you.  Not cool.

If you are a runner, this scenario gives the dog the upper-hand in the confrontation.

I typically slow my speed and use my verbal commands.  This make my bike less of a target to the dog. Often you can get past them, and if they start to chase, you can, at that point sprint quickly out of their reach .

However, if the dog is too aggressive, I will dismount and walk past the dog, using the bike as a shield between me and the dog.

I will typically start the confrontation by picking up some rocks a good distance back, or prepping my pepper spray.  Then, when I enter the dog’s territory I use my verbal commands and stay ready.  If the dog doesn’t move, I start skipping rocks at it.

However, if the dog still does not seem phased, I typically turn around at this point and choose a different route.  Its not the dogs fault that he’s where he doesn’t belong, and there’s no reason for either of us to get hurt if I can help it.

The LostCyclingDude Swears by His Asics GT-2160

What makes you faster?

Good point, JaneG. I can't believe I forgot that one. It's amazing how they wait until they don't think you are looking and then "go for the kill".

I hope you got to buy a fun pair of pants to replace the bit ones!

I don't cycle much, but I do like to walk for exercise. In my experience most dogs are cowards and they are less likely to bite if you are looking at them. So when you are moving away from one, back away don't turn. I have lost a perfectly good pair of pants walking away from a dog. 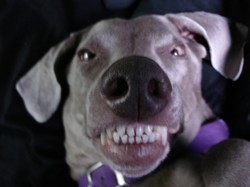 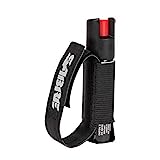 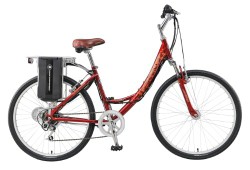 Find a selection of the best electric bikes for women. There are electric bikes available with a women's style step-thru frame.
32%  4   3 Ragtimelil
Cycling 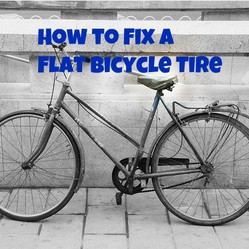 It always happens. You are miles from home, enjoying a wonderful bike ride, when the darn wheel goes flat. What do you do now?
Loading ...
Error!