Doctor Who 50th Anniversary: Day of the Doctor with Billie Piper, Matt Smith and David Tennant

Day of the Doctor lived up to all of its promises: Surprising, heart-wrenching, joyful and nostalgic. We see a turn in The Doctor's fate. Warning: Spoilers.

In the Day of the Doctor, the Doctor Who 50th Anniversary Special, we see the return of David Tennant and Billie Piper, the introduction of legendary actor John Hurt as The War Doctor and, of course, our current Doctor and companion, Matt Smith and Jenna-Louise Coleman. And, what we see, is a turn in The Doctor's fate; a release of sorts, something lifted that had been keeping him held down for centuries, for most of his long and adventurous life. Read on.

The Day of The Doctor Changes

We find the 11th Doctor, now the 12th Doctor because of the addition of The War Doctor John Hurt, as usual with his lovely and beautiful companion Clara Oswald, The Impossible Girl who has always been there for The Doctor saving him through the centuries of his long regenerative lives; the duo are brought in, literally, by UNIT, British government agency in charge of dealing with extraterrestrial and unusual threats: The Doctor's Tardis, his time travel machine, along with him and Clara, are brought to UNIT headquarters by way of crane.

To The Doctor's dismay, he finds a 3-D painting, at UNIT headquarters, of his last days on his home planet of Gallifrey: The day he had to destroy his home to save the Universe. Turns out live beings escape the interiors of UNIT's collection of paintings, paintings that are caught in time and that are real, creations of the Time Lords of Gallifrey.

Meanwhile a rift in time appears above The Doctor's, Clara's and UNIT officials' heads, a rift The Doctor jumps right into, in his usual and seemingly impulsive way: Of course, by now, we know there's a sort of method to his madness; or, at least, he sort of seems to know what he's doing.

Eleventh Doctor Matt Smith meets 10th Doctor David Tennant in 16th century England, just as the 10th is romancing the Queen of England. Well, it was the Queen who'd ordered the Doctor to help UNIT out on this case, anyway.

Point is, now we have two Doctors in one place.

Meantime, the Doctor of ancient, by our standards, Gallifrey is still trying to decide whether to destroy his home planet, while villainous Daleks are attacking the planet and threatening to take over the Universe to institute their treachery and brutality. This Doctor of the centuries past is The War Doctor, The Doctor that all subsequent Doctors have tried to forget.

The War Doctor gets his hands on the Time Lords' sentient computer that is supposed to only be used in the most dire of circumstances. And those circumstances have arisen. The machine presents him with the beloved companion of his future incarnation, Rose Tyler, who directs him on his difficult choice of destroying Gallifrey or letting the Daleks destroy the rest of the Universe.

But is it his only choice?

There's been a weight on The Doctor's shoulders for centuries. He's been responsible for the death of a whole planet, men, women and children; The Doctor's own home planet of Gallifrey, the home of the Time Lords. He was trapped, painted into a corner, it was either destroy Gallifrey and the invading Daleks along with it, or let the Daleks take over and commit atrocities across the Universe.

He had to make a choice. It seemed to be his only choice.

The choice was responsible for some of The Doctor's darkest days, his deepest sorrow and regret.

But when the Doctors gather, his three incarnations, The War Doctor and his subsequent lives, we see something new. We see a bright light shine, a new action, the bringing together and creation of a wholeness for The Doctor, able to face himself and his decision; and think of something new. It is up to him, all of him, centuries of him, to rectify his horrific choice: And make a new one.

But we find, that once again, Clara is there to save him. And this time for good. This time in a way that wipes the slate clean, brings order out of chaos and brings a whole action, that saves The Doctor from his darkest day.

Lesson From Day of The Doctor: We Can Change

What Will We See Next?

The Doctor is able to change his decision, act wholly and move on.

He had made a terrible choice, but acting together, facing himself and pooling everything together, he changes his choice. Is it possible? I say it is.

It's what we can do now. Change now, completely and be free.

And the story leaves a lot open for the future. His planet is saved and The Doctor is free of guilt and sorrow. This is a new chapter in The Doctor's life.

Will we see more of Gallifrey? Will we better understand Clara, The Impossible Girl? We saw how she ultimately helped save him and freed him from his torment. And she's been there for him in some form every step of the way.

The story is a major statement and brings many of the mysterious parts of the story together. Doctor Who fans wait in anticipation to see what's in store for future episodes, as, at the end of the year, Peter Capaldi takes over as the new Doctor.

These are exciting and new times for Doctor Who fans!

It is amazing how many good shows are reaching 50. Good things last.

I love Dr. Who as does my 15 year old daughter. Oh all those Dr's, I love netflix, I can watch Dr. Who over and over and over again. This 50th however is a prize indeed.

I totally agree; such a great story and great characters; and great writing. That's why it's lasted so long!

I adore Dr. Who, the long history of adventures and character shifts, growth and development. I'm into play write and development, stage and such. I therefore enjoy the character aspect of this long running show. Again LOVE Dr. Who, big fan! 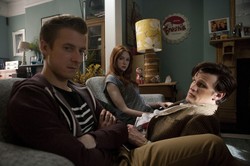