As long as he can keep regenerating, the Doctor can now live forever. But for much of his 50 years on our screens, he wasn't that immortal.

For years, Whovians watched the countdown happening. Back in the days when Tom Baker flew through time and space, it was revealed that Dr Who could only regenerate twelve times. Matt Smith was the eleventh doctor (and the tenth regeneration).

That throwaway fact stamped a use by date upon the whole series. Smith's Doctor could die, but whoever replaced him would be the second last. It was an unhappy state for all concerned. Fans and production crew alike could see the sand slipping through the hourglass.

Until the BBC slipped a fast one into a spin-off series. Suddenly there were endless regenerations, and the Doctor was immortal.

Regeneration Poster of the Eleven Doctors

As the ninth Doctor sucked the vortex energy from Rose's mind and body, he knew that he would die.  Yet the little smirk betrayed no fear.  "Timelords have this little trick." He blithely told his companion. "It's kind of a way of cheating death."

Rose may have been stunned by proceedings, but the viewers watching at home were not. We'd seen it nearly a dozen times before.

The actual mode of regeneration changed with the advancing special effects, but we knew what the Doctor knew. He was about to transform every cell in his body, and emerge in a totally different body.

This was the trick of the Timelords of Gallifrey.  Not peculiar to the Doctor alone, we'd seen it happen with the Master, Romana and River Song too.

At a moment of mortal danger, a process would begin, which could not be stopped. The old, dying body would disintegrate into the ether, while the new would form without the injuries, poison, age or whatever other ailments had killed the former.

There were variations on a theme. The second Doctor was forced into his regeneration. His whole body appeared to spin in space. The fourth Doctor seemed to know and welcome his Fate. He beckoned for the assistance of a mysterious figure called The Watcher, who apparently delivered the Timelord's next form. It was all very calm and sedate. The tenth Doctor raged against the coming of the night. He didn't want to go and his regeneration was so explosive that it set the TARDIS alight.

Fans of the show would be treated to the spectacle of a new actor, prancing around in the familiar costume of the last.  The hapless companions would each have to discover the 'little trick' for themselves.

And Colin Baker arrived wearing the costume of Peter Davison

All of the Doctor's Regenerations 1963-Today

The Rules of Timelord Regeneration

After 50 years of witnessing Dr Who metamorphose into somebody new, certain laws of Timelord biology became apparent.

What Can Kill Dr Who?

It's not so much regeneration, as conscious reincarnation. He comes back fully formed, with all of his memories intact.

So far, the Doctor is not immortal.  The changes come, but they are tempered by their limited number.  He's more like the proverbial cat with nine lives rather than truly living forever.

As for the things which kill him, they are pretty much what might kill human beings too.  Though granted, we don't tend to find ourselves in most of these situations.

Collector Set of all 11 Doctor Who Action Figures

Peter Capaldi starts a whole new regeneration cycle of thirteen lives, which technically makes him the Second First Doctor.  But that's going to be way too confusing.  The likelihood is that we'll all forget that The Warrior was the Ninth, and pin that accolade back onto Christopher Eccleston. Then ignore too his double regeneration, to make David the tenth and Matt the eleventh.

Peter will sail into the Whovian hive-mind as the twelfth Doctor. Even if he is the Second First.

Nevertheless, he's still with us and therefore not included in this round up.

Dr Who Declares Himself Immortal Now

It used to be that he could only regenerate twelve times. Now it appears that it's many more than that.

Was it sarcasm?  A throw-away line designed to impress a teenager?  Whatever his motives, the Eleventh Doctor ran contrary to all previously established facts, when he informed Clyde that there were 507 regenerations in him.

In truth, Whovians had been expecting it.  After all, the BBC were not going to let such a lucrative franchise die, just because none of their Doctors could apparently survive longer than eight years in a single form.  Something was going to have to change. Whole forum threads and conference debates were staged to speculate on how Time Lord lore would be changed.

The reality was a bit of an anti-climax.  It didn't even occur in a Dr Who story, but in a spin-off - The Sarah Jane Adventures.  From 12 to 507 wasn't a bad difference.  It would take a lot of regenerations before they were all worked through. But was it a cop-out?

Director Russell T Davies stated that it was just too good an opportunity to miss. Fans just face-palmed. Many refused to even consider it canon, as it hadn't been stated in the main show. Everyone wanted it, but not like this.  There had to be some great story device to change things, not the laws of Time Lord biology simply being erased with a word.

However, it all transpired to be a joke. The Doctor did only have thirteen regenerations in him, unless Gallifrey saw fit to award him another cycle.  And guess what they did!  Who would have thought it?

The Eleventh Doctor Regenerates into the Twelfth!

By which we all mean that the thirteenth Doctor became the Second First. Ok! I give up! Matt was the 11th and Peter is the 12th. Play on!

Matt's doctor seems to be with Sylvester McCoy to my mind. I do love him, I just prefer the darker doctors, like Tennant. Which probably says a lot more about me than them!

I'll ask Chef Keem to help with your password. <3

Great article, though I am shocked, apalled and dismayed that you don't rate Matt's doctor. As seems to be the cliche for fans now, I'm going to say he copes well with difficult scripts (though personally I think Tennant's doctor coped poorly with difficult scripts). Some great memories of being an obsessive fan as a child here.
Think I might come back to Wizzley, if I can rmember my log in.

Matt Smith is a little too slapstick for me, but he does have his moments too. Like that speech a couple of episodes back. I agree that he is of an ilk with Sylvester McCoy. I recently read something which said that McCoy's Doctor was very dark. I didn't agree with that at all. I thought he did 'zany', which is precisely what Matt Smith does too.

The best Dr for me is David Tennant, though 'my' doctor is Peter Davison. Best companion is a little harder. I have fond memories of Tegan, Adric and Nyssa, because that's really where I came in (though I've since seen the earlier ones too). Donna Noble was fabulous.

I hadn't thought about the whole sonic screwdriver thing. You are right.

Indeed! I recall a whole conversation with yourself and Warlock about Dr Who. Though I suppose that I was letting you both do most of the talking. Definitely a big fan here.

Ah! I hope that you're right about the explanation. Maybe the quip in the Sarah-Jane Adventures was just that. Something with which to sound out the fans, then dismiss or elaborate upon later.

Great article again! I didnt realise, or forgot, that you were as much of a Dr.Who fan as me, and that you also wish David Tennant had stayed :) I am excited to see what they come up with for the whole unlimited regeneration thing, since everyone is going on about it i'm pretty sure they won't leave it as it is. The teenager-mpressing thing was probably just to make people wonder and anticipate the actual explanation more. -Coss

I watched them too! But only live from Tom Baker onwards. The rest I had to see on video tapes. Can you imagine what media people will be watching on, if it did get to 507?!

The scary thing is I watched all of these regenerations as each occurred and wonderful to see them again. Hopefully, the good Doctor has some more in him (507?)

Thank you very much on both counts, Paul. I'm off to read your Dr Who Episodes article now, while looking forward to those which you'll be posting here too.

Oh! Have just shared on G+ and also on my page at http://www.facebook.com/WhoviansOnline

I will be adding some more over the coming weeks :-) Here's the link to the page with all the "must watch" episodes and of course a chance to share who "Your" Doctor is! http://www.squidoo.com/doctor-who-epi...

It's a television event fifty years in the making. The celebrations have ripp... 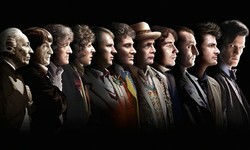 It's a television event fifty years in the making. The celebrations have rippled out through time and space, into conferences, documentaries and theater shows.
94%  14   8 kimbesa
British TV