People say that time is money, but they're talking indirectly. What if the hours, minutes and seconds of your life really were the currency? Starring Justin Timberlake.

When I mentioned watching this movie, friends warned me that it was one of those 'either love it or hate it' pictures.

I loved it. I mused on the implications throughout and afterwards too.

'In Time' reminded me, in a roundabout way, of 'Strange Days'. There's the same dystopian future and a black market in exotic futuristic technology. It hasn't quite the cult cyberpunk ethos of that classic, but it's close enough.

Only this time, that technology really is a matter of life and death.

Buy In Time on DVD

Living Day to Day in In Time's Ghetto District

What if 'timing out' meant that you dropped to the floor and died, even in the apparent bloom of full health? 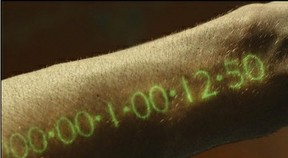 It's a fascinating concept.  It was this which elevated a generic police chase story into something quite special.

In Time is set in the future, but in a world recognizable to us today.  There was little going on which pointed to this advanced technology, except for what had happened to human beings.

Everyone on the planet had been genetically altered, so that they would stop aging at twenty-five years old.  Great!  You may say, but there's a catch.

On your 25th birthday, your personal body clock kicks into life.  Displayed in digital numerals on your forearm, it counts down to the moment of your death.  That time is only a year away.

Moreover, time can be transferred.  With the majority of the population living in poverty, the second action of their birthday is to immediately sell most of their time.  In the ghetto, people tend to live day by day, if not hour by hour.

But the ability to transfer also means that time can be given back. Factories teem with people working hard, in order to receive just a few more hours on their clock.  It's generally just enough to see them through a few hours kip, then back onto the factory floor.

But one district has it all.  New Greenwich is filled with the elite, who have the time capital to live forever.  A millionaire has a million years banked, and so forth.

One man has already lived for over a century.  He has another century on his clock.  He looks twenty-five, but his mind is old and tired. He wants to end it all.  So he sets out for a wild night's drinking in the ghetto, a sitting prey for marauding gangsters.

A good Samaritan emerges from the crowd and, in unwarranted repayment for his bravery, he gets the gift of his dreams.  A century of life on a ghetto man's arm.

It's not something that the police-like time-keepers, nor their bosses amongst the elite, will countenance for long.

Official HD Trailer for In Time

Will Salas (Justin Timberlake) is the ghetto man with a lot of time on his hands (or, specifically, his arm).

He emerges from the tale as a Robin Hood figure, determined to steal from the rich to give to the poor.

Only he calls it repossession, as their time was stolen from them in the first place.

His audacious spending leads him into contact with Sylvia Weis (Amanda Seyfried), a bored, rich woman.  She's the daughter of one of the wealthiest men on the planet. She could be immortal, but her heavily guarded life is suffocating her.

Their partnership shows what would have happened if Bonnie and Clyde had had Robin Hood instincts.

Buy the In Time Box Set

Blu-Ray, DVD and Digital formats are in this package.

Heavy on the Action, Light on the Philosophy

But the action tended to involve Cillian Murphy, so who's worrying about it? 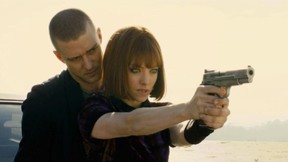 There is a lot to think about in this film, but the profundity and angst aren't lingered upon. There are certainly discussions and visual prompts concerning morality though.

At every turn, Will challenges the New Greenwich elite and their enforcers to confront the injustice of the system.

He also encourages those in poverty to share their time and look out for one another. But mistakes do get made.

There are plenty of background details or montage scenes of random acts of kindness.  We witness those with a little time keeping alive people on the brink of timing out. It brings a whole new meaning to 'every second counts'.

But, on the whole, this is an action movie.  There are gun fights and car chases; rooftop rampages and stunt falls; strategic moves and moments of true suspense. Will Salas is an accomplished gambler for a start.

The pacing was perfect though.  I never once flagged, despite preferring the cerebral candy over the police chases.  It delivered me satisfied to the end.

In Time Fails the Bechdel Test

It was barely even worth applying the test.  The movie failed to a laughable level.

There was more than one female in the film, but mostly they stood in the background looking pretty. Nevertheless, that doesn't figure in the test.

Was there more than one named? Yes!  Sylvia Weis, Maya and Greta were all named.

There were others who were known only in the movie by their relationship to the male characters - Will's Mum, Mrs Weis (mother) and Mrs Weis (wife).  They were also named in the script, but you'd have to look them up on IMDb to learn what they were called.

None of them had a conversation with each other.  They were barely in the same scenes, let alone the same dialogue.

It's a resounding Bechdel Test fail.

What is the Bechdel Test?
Three questions are asked of each movie. They are so simple that it would be harder to fail than pass. They examine the role of females in that film. Nearly half fail.
Updated: 10/05/2012, JoHarrington
Thank you! Would you like to post a comment now?
4

To be honest, the only thing that I knew about Timberlake before this was that he's a singer. I'm not even sure if singing or acting is his primary job! But he was ultimately believable in this role. I had no complaints there.

I found this movie surprisingly enjoyable. I wasn't expecting much because I'm not a big fan of Timberlake, but this movie is definitely worth a watch.