Are you a genuine activist or just a "slacktivist"? What do you do to encourage real change versus just promoting feel-good internet memes?

What is "Slactivism"? The term comes from the combination of "activist" and "slacker", and is used to deride those who will join in on-line "feel good" campaigns without actually doing anything constructive for the causes they claim to support.

Examples of "slacktivism" include:

* Signing on-line petitions
* Adding a "Twibbon" to your avatar or icon
* Posting "memes" to your Facebook status about how bad cancer is, or how everyone deserves equal rights
* Blogging about a cause
* Retweeting messages about social justice or awareness campaigns

The slacktivist will often jump on every such campaign that comes along as they require virtually no effort nor personal risk. But the slacktivist rarely will take the next step of actually contributing money to a charitable cause or social justice organization; the slacktivist doesn't attend political protests or demonstrations and put themselves in danger of arrest or physical harm. The slacktivist feels he has done all he needs to do by "spreading the word" on the internet - mostly to other slacktivists who in turn will do nothing more.

Some say slacktivism still helps the cause of real activism - or at least does not harm it. Those who care enough about a particular cause will still get out there and rally, go door to door or contribute financially to the efforts in which they believe. That slacktivist campaigns still help increase the public awareness of important issues and even if only one out of every 1,000 people who hear of a cause get off their computer to do something about it, that's still better than nothing.

But what do you think? Is slacktivism a real problem that's harming good causes by breeding complacency and laziness? Or is it an effective new way to spread the word and affect real change?

Admit It: You've Posted at Least One of These Before

Yes, once or twice I've posted one of these myself. I admit it. But then I feel icky about having done so because I know it really does nothing to help the cause and can sometimes be even hurtful to those genuinely affected.

Does "shaming" your friends and family into passing along a meme "to prove they care" really prove anything?

Does anyone go back and actually check names and see who posted a meme, and who didn't?

Does changing your avatar to a picture of a cartoon character do anything to help fight child abuse, as one controversial recent Facebook meme drew fire over?

These are just a few of the Facebook memes I've seen come and go. Think before you pass one along yourself - and think how you instead could really cause positive action:

Sound Off - Tell Me What You Think about Slacktivism

Does It Help or Harm Activist Campaigns?

Kevin Driscoll’s blog post, which is fascinating baecuse he dissects Gladwell’s lack of understanding about the nuances of the technology utilized by Twitter and also corrects the historical records of the civil rights movement which Gladwell seeks to simplify. I found that he persuasively shifted the conversation to a focus on outcomes. Ultimately, distinctions between new and old participation make less sense than an understanding of how to utilize the networks and tools (in his phrasing, taking advantage of the current cultural and technological circumstances ) of today to push new social changes. Sounds much more reasonable to me.

It's really nobody's business what you support, what you stand for, or for whom you vote. But for some strange reason, it's Defend Your Life on social media. All of us are expected to become fully demonstrative about our personal feelings about this cause or that cause. I know my friends are good people who "hate cancer" and are "against child abuse". I don't need them to constantly tell me what kind, caring people they are every time some poorly-Photoshopped picture of a candle gets passed around. You're not a "better" person because you continuously express shock and/or outrage at the latest tragedy. And if you feel the need to prove that you are, well...you've got more pressing issues.It's Facebook, not your therapist or diary. There's no reason anyone should feel compelled to share more than they should. But for the ones who do...there's the "delete friend" or "hide" buttons.

I find slacktivism so frustrating, often because it takes the form of trying to shame people, such as, 'if you don't repost this, you hate gay people'. I'd much rather people spent time volunteering or donating to the causes of their choice, as I do. I'd like to hear about their experiences, but I definitely don't want to to hear 'post this as your status if you're a true friend' or anything like that.

It encourages an already apathetic populace to believe they have in some way 'done their bit', and soothes consciences that may have otherwise been troubled enough to really 'help' (through donating/volunteering etc). It conditions the young and/or gullible into thinking that being emotionally coerced is acceptable. It sometimes reaches a saturation point where you don't ever want to hear another word about 'X, Y or Z'. - Personally, I can't believe it when I see grown adults sharing some stupid post about how much 'Cancer sucks etc'.

it leaves people thinking "I've done my part" so that when a real ask comes along, that might have a real impact, they can shake their head without an guilt and say "nope, I've done my part".

I think we can become over-saturated with it - to the point of tuning it out entirely (like a song played too often on the radio). So, choose wisely and genuinely care about your activist-type posts.

I never post updates like that. I have donated to a cause and then posted about the organization on occasion, such as Kiva or Donors Choose, if I think they are worthy and not enough people know about them. But never just the general "cancer is bad" posts.

I tend to dislike "activism" that doesn't promote action that can result in change...I would include most of the awareness campaigns in this category. If you believe in a cause, DO something that will have a true impact...don't do something just because it makes you feel good.

sockii 4 years ago from New Jersey

I think slacktivism is a genuine problem. It's far too easy to slap a "virtual ribbon" on your avatar and do nothing else to help those in need, or bring real social injustice to light. Of all the people who changed their avatars or posted a Facebook meme about, for example, the devastation in Japan after the 2011 earthquakes and tsunami, how many actually contributed any money to help the country rebuild? That's not to say it's wrong to write on-line about social justice issues or those in need. But if you do that and do nothing else, than you're basically doing nothing. And you could be spreading complacency in others that all they have to do is retweet your words elsewhere - let someone else take care of the hard part of actually seeing change get made.

... agree with Sanet above. if activism is quantified fundamentally as a numbers game (the more exposure any issue gets the more interested/activated participants), then why not thank the slacktivists for doing their share of the digital work instead of chastising them for doing something positive for said cause at all? (rhetorical)besides, some of you activists that like being physically present at rallies: giving 3 letter agency photo-ops; yelling slogans on tv news; getting added to fbi watch, homeland security domestic terrorist, and tsa no fly lists; are doing a fine job at it while some of us with virtual skills work in the shadow of your limelight.keep up the good work.

I think slacktivism helps. Any action is better than no action. Not everybody have the time or money to be an actual activist. At the end of the day the slacktivist still have a vote and spending power so even though they may not get away from their computers to go and do something about a cause the next time they vote or spend money they hopefully will make better informed choices. Activism is better but slacktivism is better than doing nothing.

Are you a slacktivist?

If you're proud of it, get a hoodie.

It only seems appropriate...

How to Stop Being a Slacktivist and Take Action

Step Away From the Computer and Fight for a Good Cause

So, you're not sure you're really doing enough to support the causes you believe in? Here are some ideas. Some, yes, take money, personal sacrifice and effort. But that's what it means to be an activist.

Activism in the digital age

What do you do to fight for causes you believe in? Do you get out there and participate in activities away from your computer? Leave your suggestions on how to stop being just a slacktivist today.

Yeah, it takes two seconds to check a story on Snopes, yet so many people fall victim to fake feel-good stories and warnings instead. But it goes beyond that - even if a story or cause is real, just sharing it around Facebook doesn't (in my opinion) equate to working for real change.

People need to read before posting; it's so easy just to click a button. Many times I have received emails from friends or see posts on Facebook that didn't seem right. I used Snopes.com to see if they were true (most were not) and emailed or posted back to let people know. It should be fairly easy to check out activist groups - just note who is writing about them - you don't want to just read what the organization has to say. 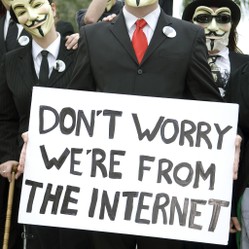 Help save the bees by creating a BUZZ about how GMO crops and pesticides are killing bee colonies across the globe.
93%  38   8 JoHarrington
Activism