Gun Hill Signal Station was built in 1818 as one of six signal stations for external and internal security of Barbados.

Barbados National Trust programs encourage locals, residents, and visitors to eyeball the 350+-year-old private residence and working plantation through annual hikes and January through March open-house fundraisers. They furnish unique opportunities for agriculture, architecture, culture, horticulture, and history buffs and island visitors to experience physical contact or proximity since Drax Hall Estate otherwise is closed to the public. They therefore give glimpses of one of the island’s biggest, earliest cash crop-producing properties, whose expanses still claim much of the eastern portion of the central insular parish of St. George.

Tradition implicates a cave and £300 as the first dwelling and initial investment prefatory to:

Timing joins with savvy alliances and associations to elucidate politico-economic successes of Sir James in Barbados and William in Jamaica. Posterity knows of interactions with:

Historians link the introduction of windmills for sugar cane-crushing with the brothers Drax. But security for officeholders and successions in ownership nowadays make tedious checking paper trails and urban legends against physical evidence at Drax Hall built in:

At time of painting, Drax Hall plantation had been in operation for over half a century (50 years-plus).

"The Island of Barbados"; ca. 1694 oil on canvas by Isaac Sailmaker (Zeilmaker) (1633 - June 28, 1721)
At time of painting, Drax Hall plantation had been in operation for over half a century (50 years-plus).
Yale Center for British Art, New Haven, southwestern Connecticut's Gold Coast: Public Domain, via Wikimedia Commons @ https://commons.wikimedia.org/wiki/File:Isaac_Sailmaker_-_The_Island_of_Barbados_-_Google_Art_Project.jpg

1686 map by Philip Lea (flourished ca. 1683-1700) with symbols for cattle mills, water mills, and windmills ("all of which are imployed in the grinding of sugar canes")
North is oriented to right. Drax Hall and the plantation's windmills (Drax Hope) are depicted (center).
Philip Lea: A new map of the Island of Barbadoes (1686): Norman B. Leventhal Map Center (Norman B. Leventhal Map Center at the BPL), CC BY 2.0, via Flickr @ https://www.flickr.com/photos/normanbleventhalmapcenter/8642371911/

1686 map by Philip Lea (flourished ca. 1683-1700) with symbols for cattle mills, water mills, and windmills ("all of which are imployed in the grinding of sugar canes")

North is oriented to right. Drax Hall and the plantation's windmills (Drax Hope) are depicted (center).

“Drax Hall – Barbados Colonial Past.” The Holiday Place > Destinations > Caribbean and Costa Rica > Barbados > What to Do > Excursions and Attractions. Retrieved August 2015.

“Drax Hall Plantation Yard, Barbados, 1971-72.” Image Reference NW0083, as shown on www.slaveryimages.org, compiled by Jerome Handler and Michael Tuite, and sponsored by the Virginia Foundation for the Humanities and the University of Virginia Library. The Atlantic Slave Trade and Slave Life in the Americas. Retrieved August 2015.

Lea, Philip. 1686. A New Map of the Island of Barbadoes wherein every Parish, Plantation, Watermill, Windmill & Cattlemill, is described with the name of the Present Possessor, and all things els Remarkable according to a Late Exact Survey thereof. London England: John Sellers.

Moll, Richard. 1736. The Island of Barbadoes. Divided into its Parishes, with the Roads, Paths, &c. According to an Actual and Accurate Survey. London England: Thomas Bowles and John Bowles.

Schomburgk, Sir Robert H. (Hermann). 1848. The History of Barbados; Comprising a Geographical and Statistical Description of the Island; A Sketch of the Historical Events Since the Settlement; and an Account of its Geology and Natural Productions. London UK: Longman, Brown, Green and Longman.

Grapefruit's origins are shrouded in mystery. The juicy fruit previously was ... 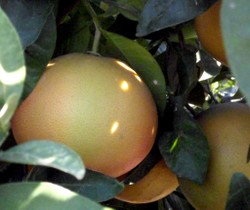 Grapefruit's origins are shrouded in mystery. The juicy fruit previously was known as "forbidden fruit" and thought to be an orange. A grapefruit by any name is alluring.
Loading ...
Error!