Are you looking for some easy to make halloween costumes? Halloween Costumes don't need to cost a fortune and home made costumes are often incredibly popular with the kids.

Halloween costumes do not have to be elaborate or expensive to look great. For those wishing to make an impression while sticking to a budget, making a homemade Halloween costume could be the wisest idea.

Here you are going to find a wide range of easy to make Halloween costumes which are definitely worth thinking about. Whether you are looking for a easy to make costume for an adult, toddler or one of the kids I think you will find something here to suit you!

The Classic Hobo: The image of the railroad hobo from the turn of the century is an iconic one. Creating a basic hobo costume is not all that difficult. Anyone who has old, out of style clothes in the attic or the basement can pull them out of storage and put together a really great looking hobo costume.

The Vampire Bat Umbrella Costume: On the surface, this idea for a costume is absurd. If you look at the history of Hollywood horror movies, it really is not. A lot of classic creature costumes were fashioned from everyday items. Taking an old black umbrella, cutting it up, and turning it into wings can contribute to creating the perfect makeshift bat/vampire costume. The only unique component is the umbrella. A black colored shirt, ski cap, and pair of pants and shoes would be the only other items of apparel necessary.

The Paper Towel Mummy: Even cheaper than bandages, paper towel can help create the perfect mummy costume. Now, you will not just be wrapping yourself up in a role of paper towels. You can shred then up and stitch or glue the towels to a sweat shirt, sweat pants, and a ski cap. Food dye or other colorings can be used to make the bandages look thousands of years old.

These are three truly easy to make Halloween costumes. While they can be made in a relatively short period of time, it is recommended to not try and make them at the last minute. Investing a decent amount of time to create the costumes increases the ability to smooth out their rough edges and make them look nice.

Are You Making Your Own Halloween Costumes This Year?

If you are looking for more easy costumes to make why not take a look at this selection of Halloween Costume Patterns for adults and teens which are sure to delight.

If you're looking for an easy to make Halloween Costume for your kids this year then a dinosaur costume could be the perfect thing.

If you make a dinosaur costume then your son or daughter can go dressed like a cast member from Jurassic Park.  Here are a few ideas for how to get this done on a budget.

If a T. Rex or a raptor is the intended costume, it is easy to accomplish this by starting with a green hoodie, several different colored pieces of felt, a piece of green fabric, a needle and thread and some fabric scissors.

To get  started, you are going to need the hoodie to be a couple of sizes larger than what your child normally wears. For slightly older children, maybe you will want to consider an adult hoodie rather than a children's one. As far as the different colors of felt, white will be used for eyes and teeth, black will be used for the eyes as well, yellow, green and orange will be used for claws and the dinosaur's spikes.

We're going to begin by making a triangle stencil that can be used as a model for the teeth and spikes. By doing this you can assure yourself that the size of the triangles will stay consistent. You can now begin by pinning the white triangles around the brim of the hood. Here we're creating the teeth and after using a straight stitch to be permanently secure the triangles, your dinosaur's mouth is complete.

Although we suggested that you use a green hoodie, your child could elect to use brown, black or even gray if they so choose. Use an oval piece of yellow felt to create the dinosaurs eyes and then attach it at the crown of the hoodie on either side. Smaller pieces of white felt and then black felt will complete the dinosaurs eyes.

Then finally use a small black circle of felt for the dinosaur's nostril and connect it just above the brim of the hoodie. Now let's move on to the spikes and claws, for which you'll need to use a similar stencil to cut out both of these features. Attach the orange triangles to the ends of the sleeves of the hoodie, to create the claws while sewing the green triangles from the top of the hood down to the bottom of the jacket creating a row of spikes along the dinosaurs back.

Finally, take your piece of green fabric, fold it in half, and cut out a triangular shape that can then be sewn together like a long cone stitched and then stuffed. Then you magically have your dinosaur's tail. That is your easy to make dinosaur costume.

To Make A Dinosaur Costume You Need A Green Hoodie!

Make Your Own Pirate Costume

Making a costume for Halloween or any special event can be a fun experience for both adults and children. A Pirate costume remains an all-time favorite with all so here are some easy instructions on how to make your own pirate costume.

Find a basic T-shirt as this will form the basis of your costume. Simple black or white will suffice and offer you a number of options. You need to decide if you are a female or male pirate. If you are male you might want to make the T-shirt appear a little more rugged and weather worn as pirates are. Cut of the bottom of your shirt and if you wish add more cuts and 'tears' with the scissors. Remove the neckline too as well as sleeves. A stripy T-shirt looks particularly good, but plain can also do the trick.

A billowy shirt really adds pirate glamour. Whether you are a male or female pirate, the flowing lines of this type of shirt really sets off the whole outfit. You can use an old shirt depending on your budget. Simply remove the collar, sew on some fancy buttons and add embellishments like ties. Wear this over your T-shirt to add drama.

Trousers will be plain and not too important in the entire outfit. If you are a female you can wear a longer black skirt. Black trousers look good with stripes painted on them for more effect. Add a tight waistcoat and paint on some skulls and crossbones.

Eye-patches go down a treat and don't forget to carry a sword and telescope. You can make a telescope from a kitchen paper roll and paint it black. Pirates hats are easy to make there are tons of templates online. Just cut the template from hard cardboard and staples the two sides together.

Little accessories to set off your finished look would include one earring in the ear. Bandannas around the neck or head and if you can find one, a fake parrot! Pirates are a fun and easy way to dress for any fancy dress or Halloween event.

The season is here and if you have a little girl in your house who is hoping to be a mermaid this Halloween, you can create a simple costume at home with little or no crafting skills. You make mermaid costume from simply supplies you may already have in your house, here is a step by step to making a mermaid Halloween costume.

To create the top portion of the mermaid costume, you want to take a bikini top that you aren't using. Purchase some synthetic seashells from your local craft store apply them to the bikini using a hot glue gun. Continue to cover the bikini top until all the material is completely covered by seashells. An alternative to just wearing the bikini top is using a skin colored tee shirt under the bikini. This works well for a child or an adult costume.

To create the bottom portion of the mermaid costume you will need some green fabric which you can get online or from your local craft store. Look for a greenish satin color, or better yet a fabric that already has green sequins on it. If you purchase the green color fabric, you can apply the sequins to it later with a hot glue gun. You want to take the fabric and begin wrapping it around the legs, starting from the knees and working to the waist. Once you reach the waist you will then tuck the top part into a waistband to hold it in place. Remove the fabric and cut two fin shapes from the excess material, and glue them to the bottom of the material.

It will appear like two large fins at the bottom, hiding the feet so walking will not be an issue. The fabric material should be wrapped snug enough to not constrict the legs, but tight enough to hold the fabric in place. If you do have some sewing skills, you can sew the bottom section into one tail piece and simply step into it when ready to be worn.

You can accessorize the mermaid costume with a plastic flower lei to be worn around the neck. Then purchase some small fish or nautical items that can be glued to the fin and tail portion of the costume. You can also glue tiny plastic fish to hair clips or head bands to top off this wonderful homemade mermaid costume.

Complete Your Homemade Mermaid Costume With A Mermaid Wig!

Which Of The Easy To Make Halloween Costumes Is Your Favorite?

Thanks ever so much for your comment Kaitlyn and do let me know how you get on!

Great tips! I've been thinking of making a mermaid costume for next Halloween. 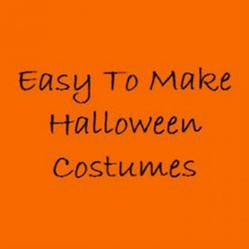