Edale is a beautiful village in Derbyshire, ( pronounced Darbishur ) England. I visited it today with a special friend, someone I can be myself with and tell anything to.

Frank suggested that I do accounts of my walks out locally as he enjoyed the Tegg' Nose account from my walk on Tuesday. This one of today's walk was about 30 minutes drive and not in my home county of Cheshire but the next county Derbyshire.

Edale ( pronounced E ...dale ) is a village in Derbyshire, England. The backbone of England is The Pennine mountain range and it starts at Edale ! Historically it has various spellings including Aidele, Heydale (1251), Eydale (1275), Eydal (1285) and Edall (1550).

It is beautifully unspoilt and a place of calm, beauty and clear air. We did lots of walking and had a pub lunch in a pub dating back to 1577. It has afternoon tea shops too ! Sounds good to me !

Starting at the main Edale car park close to Edale train station, we started off and had a cup of tea and coffee at a delightful Tea Shop called The Penny Pot.

Down the lane and on the left hand side before the village was this beautiful church. The church has a Lych-Gate.  The Lych-gate is a roofed and often gated gateway into the Church grounds. Lych is the old English name for a corpse and this gate was traditionally the gate where coffins were taken into church. Old English superstitions reckoned that if a newly married couple entered or left by the Lych-gate then one of them would be dead before the year was out!

A quick tour of Edale church was a must. This is the third church on the site and only dates from Victorian times.

The porch was beautiful as were the stained glass windows.

The graveyard and beautiful gravestones pleased me. This one was a Celtic Cross, a sunburst in fact. I LOVE Celtic sunbursts. The sun is reputed to shine through the gaps in the circle at certain times of day. The circle shows the circle of life.

The village is a short stride from the church. The houses are very quaint and made of local stone.

Once we had started up the path, it flattened out. It was beautiful along there. The scenery was very varied. High mountains, beck( stream ) side paths, fields, good pathways.

The very old wooden bridge here was VERY narrow. We could only fit one foot forward at a time to get across it.

Notice the rocky outcrop at the top, the grass and of course the various shades of purple heather. When two friends are chatting it is possible not to realise how far we had walked up the valley. The colours ahead of us were Derbyshire magnificence.

Back down the valley and lunch was at The Nag's Head. The Nag's Head dates back to 1577 as a pub and we had a lovely lunch there..

After lunch we had a short stroll and came across these narrow stone and wood gates. They are shaped thus to stop the sheep getting out of the field. It takes an intelligence test to work out how to get through these gates. Sheep wouldn't manage it.

We stopped for a lovely coffee at The Ramblers' pub and sat in the garden until it was time to leave. All in all a very good day, great location, great company,  great food, great walking, great weather.

Maggie Smith's description in that film is so funny and my family reckon it's based on me.

I order Irish tea when I have a choice or English breakfast.

I don't know any other Lych gate superstitions other than that mentioned.

Veronica, Do Old English superstitions say anything about a single or widowed person going through Lych-gates? What kind of coffee and tea do you tend to order? Have you seen the Exotic Marigold Hotel films, where Maggie Smith explains the English way of preparing and pouring tea?
P.S. Me too, I love the Celtic cross.

I sent the " Heather Covered Vale" photo into BBC Breakfast this morning as they were asking for lovely countryside photos. I hope they show it .

Derbyshire wasn't accessible to the Lancashire poor until the Victorian times with the coming of the railways.

The air at Edale is so clean I could almost taste it as I waked along. I would think the gate posts have been changed over the years but I would estimate 16th C for the oldest bits.

The walls and gates may have been renewed over centuries, but ofttimes they follow more ancient routes. The stone gate posts that Veronica shows have little lichen, which can be a sign of their having been there not long, but lichens die in polluted air, so the lichen that accumulates on ancient stones [in this case from the air of industrial Manchester] may not truly show than the age of the gate. The pathways in ancient upland landscapes may have been trodden for millenia, as people have dwelt there for so long.

Your picture shows strange old gates. We do not know how old gates like this are, but we do know that in parts of Derbyshire there are stretches of wall that go back to the neolithic period, only a few, and there are some that, though not as old, are very ancient. I got this information from the book Royston Grange: 6000 years of a peakland landscape. If the walls are old, the paths and gates are likely to be old also.

The Peak District, to which Edale belongs, which is not far from where Veronica lives, was a location very beneficial to the working people of industrial South Lancashire, for it was a place where they could walk to escape urban and industrial squalor. It is Britain's first national park. The peat bogs above Edale hold rain water that would otherwise run off and periodically flood Greater Manchester. The water is gently released to the reservoirs.

If you look at the yellow pathway central to the heather covered vale photo , ... I was walking along that very path yesterday. I feel very fortunate, indeed.

With a hectic schedule, as a wife/carer, grandmother, baker to everyone, owner of two tiny businesses and matriarch to a wider family, these local places where I can chill out are very important to me.

Today I was working in Yorkshire, quite a distance from home and when we arri... 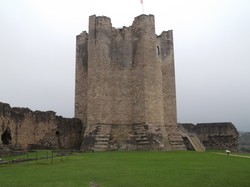 Today I was working in Yorkshire, quite a distance from home and when we arrived, the village had the ruin of a castle. But these are no ordinary ruins.
100%  128   17 Veronica
Regional Foods