A movie about the unconventional lives of artist Dora Carrington and writer Lytton Strachey set in the English countryside between WWI and the 1930s.

I’ve just watched a movie called Carrington, about Dora Carrington and her relationship with a gay writer, Lytton Strachey, who wrote Eminent Victorians, a book that includes four studies, about Cardinal Manning (Henry Edward Manning), Florence Nightingale, Dr. Arnold (Thomas Arnold), and General Gordon (Charles George Gordon). The book is in the public domain (it was first published in 1918) and you can download it from gutenberg.org for free. It turns out Lytton Strachey was one of the Bloomsbury Set, which also included Virginia Woolf, E.M. Forster, and Roger Fry, among others.

Back to the movie. I picked this movie at the British Council Library the other day for Emma Thompson. Had no idea what I was getting myself into: who Dora Carrington the artist was, who Lytton Strachey was, and what the movie was actually about, for that matter. Didn't know either that besides the script for Dangerous Liaisons (1988), mentioned on the DVD case, writer-director Christopher Hampton also wrote the scripts for The Quiet American (2002), Atonement (2007), and A Dangerous Method (2011), among other films. Christopher Hampton’s script for this movie was based on a biography of Lytton Strachey by Michael Holroyd.

So I found myself watching Carrington without any expectations at all, baffled at its surprising turns and at the same time seeing them as predictable in the context of the bohemian society portrayed.

Emma Thompson was great, as always. But the surprise here, to me at least, was Jonathan Pryce, unrecognizable here in the role of Lytton Strachey, for which he won Best Actor at Cannes in 1995. (At the same festival, Christopher Hampton won the Special Jury Prize unanimously.)

The action takes place in the English countryside between WWI and the 1930s. After Dora Carrington falls in love with a gay writer, Lytton Strachey, she leaves her boyfriend, who had been pursuing her sexually (and for marriage) for years, and lives with Lytton Strachey in a humble house in the countryside. Then Lytton becomes a successful writer, and they move to a larger and more welcoming house. Various people are involved in one another's lives, and many of them actually get to call home, at least part-time, the quarters of this improbable couple.

As other people have noted elsewhere, this is a film that asks you to accept what common Hollywood rom-com fare would have you deny, namely that sometimes you desire people sexually while loving other people (one person or more); that sometimes there’s love with sexual desire but the object of your attraction might not be interested in you sexually; and that at other times a purely-sexual relationship may work for you, but not for the other person – and not because he/she is in love and sexually attracted by another person; no, simply because the other person is not sexually attracted to you, after all. To make it short, sometimes you’re simply not meant to have a complete or sexual relationship with one person the way romantic comedies would have us believe. 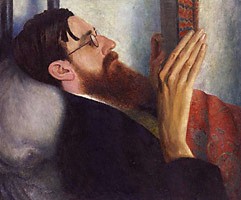 Christopher Hampton takes all this and makes quite a mess. And a disjointed one at that: bits and blobs of life and partially-fulfilled relationships follow one another in the story of Dora and Lytton, and, with rare exceptions, the people involved are pulled into the tangle of lives around this couple.

The word "mess" sounds bad, and the film may seem that way to some people, but I think it is, on the contrary, quite an accomplishment, for the various reasons I briefly mention in this article. Christopher Hampton's Carrington begs the viewer to think about times when people did live such lives (together, in one house), and, as I already mentioned, about what we are to make of love beyond the standard script of romantic comedies, which are often quite far removed from the realities of life and desire, and which some people really take as guideposts to help them negociate actual relationships.

Then there’s the question of Dora’s abasement, as she calls it in the movie, of her tending to every need of Lytton’s, and expecting nothing in return; hoping, in fact, that she wouldn’t be banished from their relationship. It turns out Lytton had more feelings for her than he chose to show. It begs the question why he never did show them -- well, except from a distance, through a letter.

The ending is quite dramatic.

Oh, I forgot to mention the music is by Michael Nyman. I felt it was quite overpowering at times (and not in the good way we heard in The Piano, but in a rather jarring way), but it did capture well the atmosphere of the scenes.

I had not heard of this movie - now I want to see it! Thanks for the excellent review.

Oh no, I wanted to see The Imitation Game and missed it. I'd like to see The Object of My Affection too :) It's not with Emma Thompson though. But I agree she acts in deep movies :)

Mira, The thought-provoking intricacies of Carrington's plot also get covered somewhat similarly in The Object of My Affection and in The Imitation Game. It's sad when the lack of reciprocated feelings gets in the way of friendship, as it appears to do in The Imitation Game and does not do in the fictitious Object of My Affection.
I find that Jonathan Pryce and Emma Thompson generally act in films which give me culturally enriching takeaways regardless of whether there's a happy ending or not.

Thank you, Lisa! I enjoyed your comment on the Bloomsbury Group too :-). Talented writers often are like that :-)

I enjoyed the film, and I agree with your incisive review! The Bloomsbury Group is fascinating, but the people were really quite snobbish and some weren't likeable.

Thank you for reading!:)

I haven't seen it. It sounds interesting. Thanks for the review.

Thanks, Shraddha. I hope you'll enjoy it! It's not a very happy movie, but it's a memorable one.

Hilary and Jackie is a powerful film about the tragic life of prodigy cellist...

Hilary and Jackie is a powerful film about the tragic life of prodigy cellist Jacqueline du Pré and her relationship with her sister Hilary. No spoilers.
83%  12   7 Mira
Necklaces