Here are a few gift ideas and other fun merchandise that tie into the Ender's Game movie and the Ender universe in general.

I've been a fan of the science fiction book Ender's Game for years, and I also enjoyed the movie Ender's Game that was released in November 2013.

I've shown here some fun Ender's Game merchandise that ties into the movie, but also designs that were created by other fans of the Ender saga.

Some of the designs shown here are created by Orson Scott Card, author of Ender's Game and the Ender saga. Other designs are by fans of the Ender series.

Have you read the science fiction book, Ender's Game by Orson Scott Card?  Have you seen the movie that was released in November, 2013?   If you're as huge a fan of the Ender saga as I am, you may be looking for Ender's Game-related merchandise.

I've included here a number of products that interested me with Ender's Game designs, including t-shirts, mugs, buttons, and bumper stickers.

Some of the designs featured here are created by Orson Scott Card.  So even though they're not official MOVIE merchandise, they're official Ender's Game designs.

These first few items have designs created by Orson Scott Card, creator of the Enderverse (the Ender's Game series)

This t-shirt has the official Orson Scott Card's Ender's Game logo in a bold, blocky print.  The design works well with the yellow shirt that's shown, and also with the natural color shirt.    Some of the other available colors are too dark or too gaudy to work well with the design.  This is also available in a ladies "baby doll" fit.

The coffee mug also has the official Ender's Game logo, along with Ender's instruction, "The enemy's gate is down".

This very important phrase comes about from Ender's observations during zero gravity training battle games in Battle School.  Once people enter the zero-g battle room, they have to learn to re-orient themselves in space.   Whatever was "up", or "down" in regular gravity doesn't apply in zero-g.

This phrase becomes a symbol to think outside of the box in difficult battles where the odds are against them, or for any difficult situation in life that needs a new perspective in order to resolve it.

The second t-shirt includes the "Actual Ender's Game" logo, along with one of the favorite quotations from the book Ender's Game,"The essence of training is to allow ERROR without CONSEQUENCE".

This refers to the battle games in the book, but can also refer to any training we undergo to prepare for difficult situations.   Errors during training show us where we need to improve before the real challenge begins.

Ender's Game - The Movie was released November, 2013, with great excitement about this adaptation of one of my favorite science fiction books.

This pendant necklace is a great collectible for anyone who is a fan of the movie or of the books.

It represents the logo of the International Fleet, the organization that was created by the peoples of Earth during the Formic War to unify the world as a way to better protect humans against the Buggers.

You can wear your I.F. pendant with pride or give it as a gift to another fan.

These adorable vinyl figures of Ender and Petra are fun items to have on your desk.  With their big heads, wide eyes, and small stature, Funko pop culture vinyl figures are patterned after the Japanese chibi style of anime caricature.

Here are a few of my favorite Ender's Game designs on Zazzle that were created by fans of the Ender series.

Some of these designs are on more than one type of item. If you like a particular design but want it on a different item, click the image and check to see what else is available from that designer's Zazzle store.

What Do These Designs Represent in Ender's Game?

The International Fleet Battle School is a military academy where talented and promising young boys and (a few) girls are taken to be trained as leaders for the fleet's armies in space.    These armies are to defend Earth from "The Buggers", insect-like aliens who have attacked and decimated Earth's population in the past.

The Battle School students are divided into armies named after animals.  Ender became the commander of the Dragon Army.

In Ender's time, families were only allowed to have two children.   Under certain unusual circumstances people were given permission to have a third child.  Ender's older brother and sister initially showed great promise for Battle School, but because of certain personal characteristics, they were deemed not suitable.  So Ender's parents were encouraged to have a third child in the hopes that he would have the mental and emotional make-up to be successful in Battle School.  The I'm a Third Like Ender pin, above, refers to someone who's a third child.

The  t-shirt shown, has the tongue-in-cheek design to show support for Peter Wiggin for Hegemon, 2012.  This fit in well with the political climate of the U.S. as it geared up for the presidential election in November, 2012!   I'm guessing that a new design will be created for the 2016 presidential election.

The Hegemon, in the Ender series, is the title of the global monarch who is elected by the citizens of the world.   The Hegemony was formed to unite the Earth against the "Buggers".

Thanks for visiting! Do you have any comments?

It looks like we'll have some great movies to go to this year! :D

I started the book but didn't finish it. I will. :) 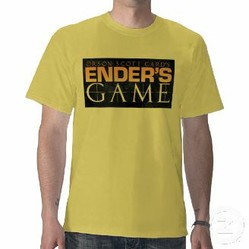 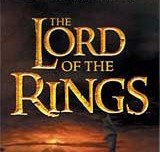 Directed by Ridley Scott, Prometheus was one of the most widely anticipated films of 2012. An epic story, spanning galaxies, which raises more questions than it answers.
Loading ...
Error!