Eternity: Can We Comprehend What It Is?

According to current theory time and space are in a sense properties of matter since they would not exist without matter, so in the absence of matter there would be no such thing as time, nor space. In fact, it also works in the other extreme, time is meaningless in a black hole, and a black hole detaches itself from space. So, there is a question of what happens apart from the physical universe, since time as we know it is a property of our universe. Yet the effect of a black hole external to the black hole does exist, and it bends space to the extreme.

So, the question is can we expect time as we understand it to remain for eternity?

Did Time Always Have a Meaning as We Know It?

If one accepts the Big Bang, and there may or may not have been one, then all matter in the universe would have been once collected together.  This could have been a colossal black hole, and time would have had no meaning within it.  External to it is a different matter.  So, if we once again go back to a singularity, time would again cease to have meaning and possibly not even exist within it.  Currently we have theories, but there is no experimental evidence of what happens in a black hole.

But, was there matter external to the Big Bang?  Is our universe just one of many?  We have no way to know.

Is an Expanded Universe in Our Future

Currently, we believe there is something unknown that is causing the universe to speed up as it expands.  This is a problem, since if it expands too much matter would be so spread out that time might again be close to meaningless.  We simply do not know what time would be like in a sparse universe.  We call this mysterious phenomena of the cause of the universe expanding dark energy.  There are speculations about what it could be, but it is currently a great mystery of science.  What would happen on the extreme is beyond experimentation where matter is so spread out it practically does not exist in a meaningful density? We have to admit that we really do not know.  But one possibility referred to as the “Big Rip” has even atoms breaking down and small, subatomic particles being all that is left of our universe, and these tiny particles would be drifting farther and farther apart.  Can anyone really define time in such a universe, and be certain?

Maybe time would still exist, but would it still pass at the same rate?  Therein is a question we cannot answer.

While we do not understand the spiritual world, we have glimpses into it.  There is no reason the rules have to be the same as for our physical universe.  And, there might even be a special set of rules for God.

God gave some hint with the burning bush in the Old Testament.  He identified Himself as “I AM.”  If someone asks you about a past event, say a sporting event you attended, you would answer in the past tense.  This use of the present tense by God brings about the question of whether God uses time at all, or is simply always present external to physical laws.

Another hint comes from the reference to the end of days.  Does this mean time will end, or simply that the sun will end?  Does it refer to an actual day literally, or to time itself?  We expect the sun to end, or at least cease to exist in its current form, and the endings may vaporize the Earth before the sun collapses into a cinder of a star.  It is expected to grow in size to include the Earth’s orbit before the final collapse.

So, it appears God does not use time as we do.  But, as long as we are alive we cannot understand what eternity is, since we cannot understand time as it pertains, or does not pertain, to God, and whether those rules also apply to other beings in the spirit world.  Certainly some sequencing is involved in the spirit world, for after the revolt when Saint Michael cast the devil and his followers out there is no evidence they can simply go back before the event, or use a prior to the event existence.  That singular event divides existence into before and after, and they do not intertwine even for spirits, except possibly God who is thought to be always in the present, a concept difficult for us to fully grasp.  This implies sequencing in the spirit world with concepts such as before and after.

We can only conclude eternity means without end, but is it in the context of time as we understand it?  That remains to be understood in the next world.  And, an even harder question is what does without beginning mean, since time would not have existed in our current understanding before creation.  Before matter came about would time even be able to exist, or would time have had a different form?

The indroduction is our own Zazzle product, and the image and saying are our own.

each person is unique, which is what make wizzley work.

We each have our own areas. Your knowledge of Physics and Mathematics exceeds mine by far.

The Middle Eastern World was conscious of the polarization between light and darkness, which they saw as the conflict between good and evil. This world was ruled by the powers of darkness in the view of some.This conceptualization was inherited from Zoroastrianism, which contributed to Jewish culture in the time of the Persian empire.

The term wiser may not be the best translation, the context suggests shrewder, and it may be that, while Jesus was advising that badly earned money should be used fro good purposes, his thinking linked financial cunning with a non-religious attitude.

Light is a form of energy, so perhaps it refers to angels. 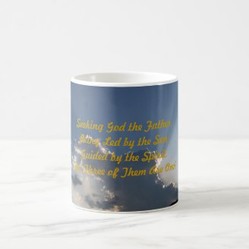