Things are happening at the Royal Mint that should bring excitement to coin collectors. The new coins from the United Kingdom are beautiful pieces.

The Royal Mint has been operating for over a thousand years, and in that time has developed a high degree of excellence as evidenced by the quality of the British coins. While it mints for many nations, it has the responsibility of minting the coins of the United Kingdom as its primary duty.

The Royal Mint has for a long time lagged in creativity, and some of its coin designs did not keep up with the multitude of designs from places like Australia and Canada. But, now things have changed. The new additions to its coinage are astonishing, and they may very well find a universal appeal.

Not All British Coins Are for Circulation

Some Are Also Available as Proof Coins

There are two new bullion British coin series, joining the Sovereign, the Lunar series and the Britannia.  The series The Queen’s Beasts began in 2016 for bullion coins, and 2017 for the proof coins.  Already the series is in its minting of its fourth coin, since they are coming out at a rate of two a year.  The first four coins are the Lion of England, the Red Dragon of Wales, the Unicorn of Scotland, and the Griffin of Henry III.  I give more detail in another article on Wizzley linked below, and even more on my coin website, Black Spaniel Gallery Coins, in the coin blog section.  I invite all to read my coin blog.  The even newer bullion series is the Landmarks of Britain, which began in 2017.  I have no idea how many there will be, but the first two focus on London.  The first, the 2017 issue, was Big Ben, and the 2018 issue is the Tower Bridge.  I also have an article on my coin blog on this series which is available for reading here.  Unfortunately, checking the Royal Mint’s website gives only the Queen’s Beasts series, the Landmarks of Britain coins are available only at the Royal Mint Bullion website, which is a separate website.

The one-pound British coin has experienced a problem in the past with counterfeiting.  The new Royal Mint coin makes this difficult, giving an added layer of security.  The planchet, or blank, used to produce this coin has a dodecagon shape.  A twelve-sided coin is different enough to dissuade most counterfeiters.  There are four symbols on the 2017 coin for the nations of the United Kingdom.  While these may show up in circulation, the proof coins are available from the Royal Mint.  An article for my coin blog is planned, and should be ready within a week.

Many mints do not sell bullion directly to the public, but the Royal Mint does. It has a special page, so they are not obvious on the royal Mint website, it is called Royalmintbullion,com. They actually sell many bullion coins from around the world. I suspect it is a branch of the royal Mnt because they use the mint;s logo, which must be copyrighted. It is worth visiting the site just to view the images.

The transition between old [circular] and new [dodecagonal] pound coins has proved smooth, as the banks simply change them for customers on request. Some shops accepted old coins for a time after transition. I expect that the next change will be a new £2 coin, though this has yet to be publicly mooted.

I was unaware that there were bullion coins. 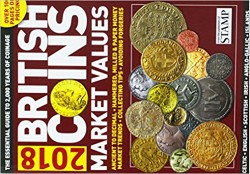 The State of Alaska has an interesting art contest annually. The winning design is placed on the Official Alaska State Medallion, which is highly collectible.
70%  16   4 blackspanielgallery
Coin Collecting