Film Review: As You Like It, Shakespearean Play Filmed by Director Kenneth Branagh

As You Like It by William Shakespeare gets the attention of a master of his craft when Kenneth Branagh matches cast with characters and dialogues and crew with props and venues.

As You Like It assumes an enthralling niche within William Shakespeare’s (April 23, 1564? – April 23, 1616) plays and sonnets when adapted for movie-going audiences by Sir Kenneth Charles Branagh and released for:
• cinematographic premiere on September 1, 2006 in Italy;
• television premiere on August 21, 2007 in the United States of America; and
• DVD premiere on October 8, 2007.

The pastoral comedy belongs among those Shakespearean settings that include bio-geographies outside England since events occur in:
• a duchy in France; and
• the Forest of Arden.

It challenges readers and viewers with Arden’s true identity as forested areas at:
• Arden near the Bard’s Warwickshire hometown of Stratford-upon-Avon; or
• Ardennes in northeastern France, southeastern Belgium, and western Luxembourg.

Bryce Dallas Howard, daughter of director Ron "Opie" Howard, plays Rosalind in Kenneth Branagh's film version of "As You Like It" by William Shakespeare.

Her charming delivery of the epilogue takes place near and at the film's lot-full of trailers.

The Branaghian film nevertheless deviates from the Shakespearean play by:

The venue emerges as particularly supportive of the forest-dwellers’ courage and of the music score’s haunting mix of East and West. It finds itself therefore no way obstructive to the otherwise faithful Branaghian representation of actions, characters, and dialogues.

Outside of the studio, Kenneth Branagh filmed on location at Wakehurst Place near Ardingly, West Sussex, in southern England's High Weald.

Transgressors know right from wrong when:

Frederick’s example leads Jaques (Kevin Kline) to hermitry after Oliver, Orlando, Silvius, and Touchstone respectively marry Celia, Rosalind, Phebe, and Audrey. So As You Like It makes 127 minutes culturally enriching and educationally entertaining, thanks to:

Kevin Kline in As You Like It ~ includes Patrick Doyle's "Under the Greenwood Tree" for flute and koto; also the play's famous monologue, "All the World's a Stage

Uploaded to YouTube on September 26, 2007 by MyShows AreOn ~ URL: https://www.youtube.com/watch?v=cWFrwwmN3eA 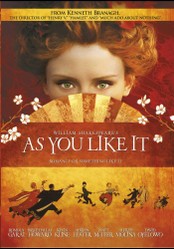