William Shakespeare's history play Henry V gets its best, grittiest filming in the 1989 release by a master of his craft, Kenneth Branagh, and his perfect match of cast and crew.

It breaks ground with its world-famous, world-respected cinematographic adaptation in 1989 by Sir Kenneth Charles Branagh as a movie whose filming seamlessly matches cast with costumes, dialogues, and events and crew with props and venues.

As a faithful rendition of its namesake play, the action/biography drama concentrates on a young king’s winning of a critical battle and a royal betrothal.

He expects France’s throne as:

Henry goes from forcing the Governor of Harfleur’s (David Lloyd Meredith) surrender to:

He heads into battle after:

He is victorious because of:

England's fifth Henry is unforgettable then and now

He knows that Katharine (October 27, 1401 – January 3, 1437) will be a beautiful Queen even if her English needs work. So Henry V lets loose 137 culturally enriching, educationally entertaining minutes of European battles and betrothals, thanks to:

Uploaded to YouTube on April 19, 2008 by Martin Solomon ~ URL: https://www.youtube.com/watch?v=hPXXuEel0fU

Academy Award winning adaptation of William Shakespeare’s Henry V by Kenneth Branagh (in his masterful directorial debut). Once an undisciplined prince, Henry has matured into the powerful King of England and has set off on a campaign to conquer France. 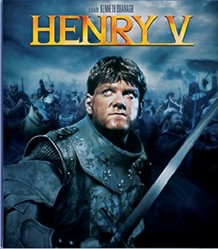