Film Review of Just Around The Corner: Shirley Temple With Bojangles and Bert Lahr in Musical

America's Great Depression impacts characters played by Bill "Bojangles" Robinson and Shirley Temple in the 1938 film version of "Just Around the Corner."

But she warms most hearts. Will ornery bankers and managers keep her and a doorman friend from reversing depressing effects of the Great Depression of the 1930s in “Just Around the Corner”?

Shirley Temple displays her trademark optimism in Just Around the Corner.

Jeff believes happiness and success still possible even though:

Penny believes Samuel to be the “Uncle Sam” whom Jeff says will end the Depression with jump-started business. She impresses Samuel by:

But Julia and Samuel interfere with Milton’s and Penny’s getting Jeff and Lola reconciled. Samuel offers Jeff employment in Borneo, without Lola’s and Penny’s company.

The movie ends with Jones’ and Penny’s “I Love to Walk in the Rain” routine convincing Samuel to let Jeff:

Published on YouTube on March 6, 2016, by Shirley Temple ~ URL: https://www.youtube.com/watch?v=gC9wJyMavtE

Shirley Temple. "Shirley Temple I Love To Walk In The Rain From Just Around The Corner 1938." YouTube, March 6, 2016, @ https://www.youtube.com/watch?v=gC9wJyMavtE

about 4 months before release of "Just Around the Corner," the last of 4 films in which Shirley and Bojangles sang and tap danced their way into the hearts of filmgoers

Shirley Temple celebrates her 10th birthday on the set of "Just Around the Corner."

Film Review of Rebecca of Sunnybrook Farm: Shirley Temple and ... 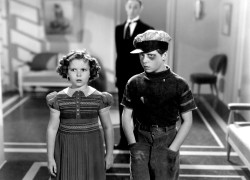 Just Around The Corner
21%  0   3 DerdriuMarriner
Musicals